Values about water, beyond the usual economic values, are at last attracting serious attention from the water profession:The UN High Level Panel on Water released the "Bellagio Principles on Valuing Water" in May 2017, citing "the multiple values and meanings" that make water "more than a substance".The Vatican hosted a 2017 World Water Day conference on water values (www.worldwatervalues.org), and American water utilities invoke the multiple values of water in lobbying for greater investments in urban water infrastructure (www.thevalueofwater.org).Meanwhile, the ongoing tragedy of Flint, Michigan's water crisis in the United States, and renewed controversies about dam development nearly everywhere, ensure that issues of water values stay in the public's awareness.

The current discourse on water values, however, is proceeding with scarcely a reference to either the theory or the practice of ethics, the field of study formalized by Aristotle, and painstakingly developed over the past 2500 years to make sense of multiple, conflicting, but also synergistic values.A psychologist might conjecture a sub-conscious avoidance strategy.Why else would water experts who claim such an interest in values turn their backs on the very tools that might unlock the workings of those values?

Raising the flag of values without following up with ethical analysis smacks of intellectual insincerity, providing some amusing conceptual diversity (Look how Indigenous activists regard the river as a living being!), but stopping well short of threatening any established paradigms.According legitimacy to Indigenous water beliefs could have rather inconvenient implications.Yet a radical deconstruction of the established order is exactly what the water world needs.Policies that the status quo considers reasonable are guaranteed to lead us nowhere.Are we ready to challenge the policies that have brought major rivers and once-abundant aquifers to the brink of extinction?Can we see the injustice of disenfranchised racial minorities drinking contaminated tap water?

If we fail to apply the ethical tools already in hand, that have been developed by the work of UNESCO's "Water and Ethics" program (1998-2004) and various scholars since, we are in effect relinquishing the moral responsibility of defining how water should be used and how water ecosystems should be managed.And if we have learned anything from recent political developments in the United States and other countries, it is the very real dangers of moral vacuums. When the thought leaders are hesitant to address ethics, then less thoughtful leaders will inevitably occupy that space.

We cannot be neutral.If we as water experts decline to address the ethics of water values, policies and strategies, we are effectively ceding our responsibilities to the prevailing political and market forces, and that is unlikely to lead us to "the world we want". 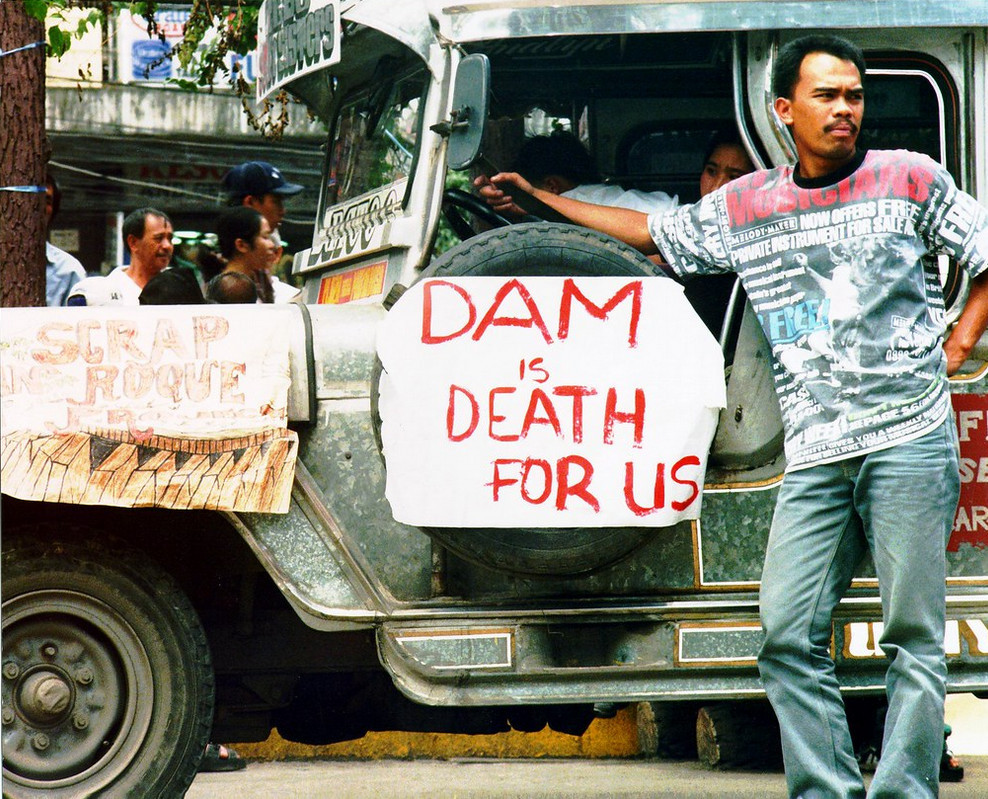 Credit: International Rivers
Man stands next to "Dam is death for us" sign written to protest against the San Roque Dam in the Philippines. www.internationalrivers.org/en/southeast-asia/
https://www.flickr.com/photos/water_alternatives/45400031742/in/album-72157685780963324/

No comments made yet. Be the first to submit a comment