Nexus: how to save it from being hijacked and trivialized?

It is said that 'resilience' is notoriously difficult to define but quite obvious when found depleted at times of disaster or other social stress. Something similar happens with the nexus concept: examples abound of "de-nexused" projects designed and implemented within narrow disciplinary or departmental silos that failed to incorporate important benefits; but when one looks for good nexused examples, it would be easier to find the proverbial snowman Yeti than a good nexused project linking water-energy-food beyond the household level.

Yet nexus is now the flavor of the month. Its predecessor, Integrated Water Resources Management (IWRM), has gone somewhat stale despite the musty kitsch lavished on it over the last few decades by development agencies and think tanks. Both IWRM and the nexus are essentially holy grails for development theory and practice, and as such promise much but deliver little. IWRM, an undoubtedly laudable effort, was hijacked by water agencies and their love for procedural solutions rather than substantive changes which would redefine their values and goals. Rather than admitting that water allocation is a very political process, agencies tried to domesticate IWRM decision-making by downplaying underlying power asymmetries and justice concerns. Nexus stands a better chance only if it is not again hijacked by procedural fetishists.

Environmentalists have always argued about the interconnectedness of issues around natural resources. Nexus, unlike IWRM, has also found backing within the business community that discovered the disastrous domino effect cascading through different sectors with the 2008 financial crisis. While this has broadened the support for intersectoral solutions, the penchant of market analysts (and their partner government agencies that swear by public-private partnership) for framing the problem as manageable through the same old tools of methodological individualism, expert modelling through efficiency-driven criteria ignoring plural rationality, and market myopia failing to look beyond commodification does not bode well. Nexus is in danger of getting enmeshed within the same comfort zone of silo practitioners unable to allow uncomfortable knowledge around social injustices and power hegemonies to filter in and nudge all towards a truly nexused future.

We argue that any desire to transcend silos and practice the nexus approach comes about in one of three ways. The most common is during disasters and major disruptions when silo thinking fails; but this does not last very long, and the window closes when media attention fades. The second is with enlightened statesmanship and charismatic leadership. The former is an opportunity but is not desirable nor advisable to wait for, while the latter risks handing too much power to potential dictators.

The third way of achieving a nexus approach during more normal times is to allow all three managing styles of bureaucratic hierarchism, market individualism and civic activist egalitarianism not only to have a voice at the policy table but also to foster "constructive engagement" between them. This public-private-civic partnership would be where the concerns of each is responded to by the other two, and in the process all three modify their original "contradictory certitudes" and come to some common middle ground. Voice without response only leads to cacophony and impasse. These three organizing styles, because of the different ways they see and define problems, propose very different solutions. Market individualism as risk-takers define problems in a manner that allows for more profiteering, agency hierarchism for more controlled management, and civic movements (the "ethics community") for risk sensitization and inclusiveness. Such a genuine democratic platform would have accountability, interdisciplinarity and humble empathy as foundational, thus laying the groundwork for a true nexus approach.

Will this freer play of a diversity of organizing styles and the contradictory viewpoints they lay out for public discourse bring about a better outcome than IWRM or is this an impossible utopian order?

Markets and hierarchies, with their working rules based around profits and efficiency but not so much social justice or equity, have always been the dominant players in water, energy and food sectors. They have often demonstrated myopia that has been detrimental to the concerns of other silos. What is often missing is the egalitarian voice of voluntary civic activism concerned more with ethical issues, which ropes in the voiceless (e.g. the marginalized, environment, future generations etc.) and which sees the problem from a grassroots "toad's eye" perspective rather than the "eagle eye" view from high above.

The challenge before those advocating for a nexus approach is one of scale: given that decisions at the household level are mostly always nexused, how is one to move upscale to national and international levels? Village councils and municipalities present better opportunities than international agencies; but even here, the real challenge is to make sure that the missing voices – especially the egalitarian ones – find their respectful place to propose alternative solutions and arrive at equitable compromises. Nexus thus becomes more about a "constructively engaged" process than about pre-ordained goals and rules, and hence offers a better chance for success. 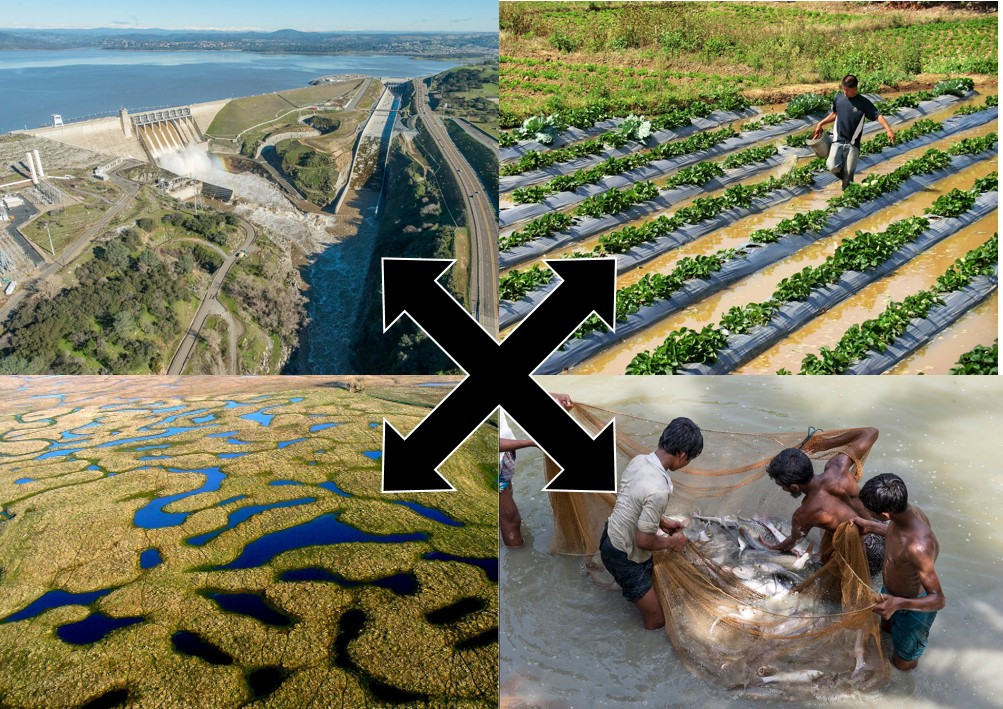 No comments made yet. Be the first to submit a comment