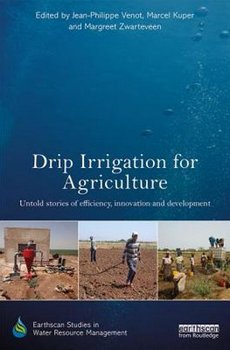 The scope of this book is very well established in the first three chapters. In Chapter 1, Jean-Philippe Venot lays out an interesting perspective on how drip irrigation technology conquered the world, and how it shifted public policy towards its promotion and subsidisation. Margreet Zwarteveen’s science and technology studies framework in Chapter 2 has a relevance for the analysis of technology adoption, dissemination, and impact, which is applicable beyond drip irrigation. Chapter 3 provides a good background on the design and layout aspects of drip irrigation systems – useful to readers who are less familiar with how a drip irrigation system works. This chapter also discusses problems encountered in drip irrigation, and practitioners’ responses at the field and farm levels.

Chapter 4 by van der Kooij et al., Chapter 5 by Kuper et al., and Chapter 6 by Bossenbroek et al. challenge, on two grounds, the efficiency arguments usually put forth to justify the promotion of drip irrigation. First, water lost due to inefficiency at the farm level is captured by downstream users, hence the water-saving argument for drip irrigation does not hold at the watershed or basin level. Second, if farm-level water-use efficiency improves because of using drip irrigation, farmers often use the saved water to expand their area under irrigation, causing users downstream to be worse off. This argument –that drip irrigation leads to more rather than less water consumption – is not convincingly put forth in the book, for many reasons.

First, it is legitimate to argue that new uses should be allowed only after looking at system-level and watershed-level savings from drip irrigation, but using this argument to undermine efficiency-improving technologies is misleading. Because of such factors as deep percolation, evapotranspiration, and possible mixing with saline water, not all water lost due to inefficiency reaches downstream users, and re-capturing lost water is expensive as it requires energy to pump water from the ground or from streams. Second, authors do not sufficiently distinguish between water conservation and water efficiency, and thus water conservation arguments are used to attack the efficiency merits of drip irrigation. Technical efficiency of any input, including water, is defined by how much output can be increased using the same level of input, or by how much one can decrease the amount of input used while producing the same level of output. The confusion between the concepts of efficiency and conservation conceals the fact that the issue is not whether drip irrigation leads to efficient use of water, but rather how the property rights of saved water should be defined in ways that can lead to water conservation. Third, Chapters 4, 5, and 6 share a common thread in their indifference to scientific sampling and representativeness. Chapter 4’s argument that drip irrigation leads to greater abstraction of water, and not saving, is based on only 15 drip irrigators which are further subdivided according to water sources. Fourth, the authors in Chapter 4 repeatedly argue that water-saving arguments are being promoted without ever measuring the claimed water-conservation outcomes. Their argument that drip irrigation does not save water has the same flaw: it is not based on any systematic measurement that shows the failure of drip irrigation to lead to water conservation at the watershed level. The only result repeatedly referred to as convincing is that of Benouniche et al. (2014), which is based on data from only 22 farmers in Morocco, where eight of them showed efficiencies equal or inferior to gravity irrigation.

In some chapters, authors appear less interested in exploring alternative explanations than in proving that drip irrigation does not lead to water savings and has even caused groundwater depletion. In chapters 4, 5, and 6, for instance, it is said that shifts to drip irrigation come in the context of broader social and economic changes. Drip irrigation expansion in Morocco, they assert, occurred at the same time as a push for canal lining – with its associated engineering problems and migration implications, as discussed in Chapter 4 – and land rights changes, which led to shifts from cooperatives to private investors, as discussed in Chapters 5 and 6. However, the authors are not clear on the role played by these wider social and economic changes with regard to the impact of drip irrigation on water-use efficiency or conservation, and the conclusions of these three chapters are too simplistic. There are chapters where the authors’ personal opinions and beliefs are louder than the conclusions supported by data and analysis. For instance, the evidence in Chapter 6 remains at best anecdotal, and a few personal stories are used to support grand claims of efficiency that would have been best backed by other analyses – the chapter seems largely driven by ideology rather than by objective scientific analysis.

Chapter 9, by Jaime Hoogesteger, provides a good argument that drip irrigation fits well with some forms of production but not others: highly specialised production systems with export-oriented, fresh-vegetable production is an example of a positive application of drip systems. In such cases, drip irrigation reduces costs of pumping, fertilisers, pesticides, and labour, and leads to higher yields, as it enables a higher plant density and more targeted and precise application of fertilisers. By contrast, drip irrigation does not fit well with communally shared water resources due to the difficulty of coordinating among farmers’ different crop choices, cropping calendars, and production practices.

Wanvoeke et al., in Chapter 13, makes a provocative argument that drip irrigation in Burkina Faso is promoted by the different governmental and non-governmental actors because they depend on finance provided by international development agencies, and that these actors are closely connected through personal relationships, flows of funds, equipment, and staff. Hence, they are accountable to each other and are united in their desire to install drip irrigation for smallholdings, promoting drip systems as a successful and effective development tool regardless of the evidence on the ground. This “supportive coalition theory” plausibly explains the reason for the promotion of drip irrigation without serious evaluation of the impact of sustained use. Though the authors have done a good job of discussing the increased number of actors and relationships in the supply of drip irrigation, the reader still needs more evidence in order to be convinced that increased numbers of actors and relationships are enough to allow the ignoring of impartial assessments of the performance of drip irrigation on the ground.

Chapter 14 by Douglas Merrey entertains the supportive coalition theory of Wanvoeke et al., calling it a “vested interest theory”. He substantiates it with a realistic example of this hypothesis-in-play, using a USAID-funded project in India, Kenya, and Zambia where drip irrigation is one of the technologies listed for commercialisation, and where Fintrac is the implementing agency, and its drip manufacturing partners are Driptech, Netafim, and iDE. Two interesting points Merrey raises in support of the vested interest theory shed light on the question of donor-funded aid projects, and NGOs or projects driven by private firms. First, none of the private firms involved are willing to use substantial amounts of shareholders’ capital to develop markets for small low-cost drip irrigation kits – instead, these firms receive grants to promote their particular drip kit in specific countries. Second, even after a decade of pilot testing and dissemination of free drip kits, no one has financed proper impact evaluation of their investments in these kits. Donors, NGOs, and private firms prefer instead to continue drip irrigation projects in the absence of evidence of real impacts. As Wanvoeke et al. argue in Chapter 13, donors and NGOs prefer to evaluate the success of drip irrigation based on the number of drip kits disseminated and the number of farmers trained (numbers which are self-generated and usually not checked by any independent organisation). Merrey asserts in Chapter 14 that there is also no information on whether farmers continue using the kits after the project ends. He argues further that, to date – except for a few studies in Zimbabwe – there have not been any systematic and independent assessments of the actual use, benefits, and costs to farmers, or of the impact of drip irrigation kits in Sub-Saharan Africa. Whether the “supportive coalition” or “vested interest” theories are true can only be verified if donors, NGOs, governments, and private firms are open to conducting systematic evaluations of their drip irrigation projects. Until that happens, these theories are justifiably the main interpretation of why drip kits are vigorously being promoted without credible analysis of their actual use and benefits.

The book convincingly shows the need for local tinkering and adaptation of drip technology to fit local contexts. A case in point is the bricolage process described by Kuper et al. in Chapter 15, where drip irrigators in Morocco make changes to the drip technology to fit the system. Chapter 16 by Naouri et al. provides a must-read work on farmers’ adaptations and innovations of drip irrigation in Algeria. There, in order to make drip irrigation systems fit with the sharecropping system common in the study area, famers use water towers as both pressure regulators and management devices, and use decentralised fertigation management.

Chapter 18 provides a good description of state subsidies for drip irrigation in Gujarat, India, which are designed to encourage private-sector involvement, and risk sharing between government and the private sector. However, it is a stretch – and possibly misleading – to go on to evaluate the success and impact of the subsidy program and make big claims about its distributional equity based only on the program’s promotional materials.

Overall, the book is a must-read for anyone interested in agricultural water management in any part of the world. It challenges popular wisdom on drip irrigation and shows the complex dimensions of the technology from a wider set of vantage points.

Acknowledgements: The author would like to thank the CGIAR Research Program on Water, Land and Ecosystems for supporting the time dedicated to review this book.