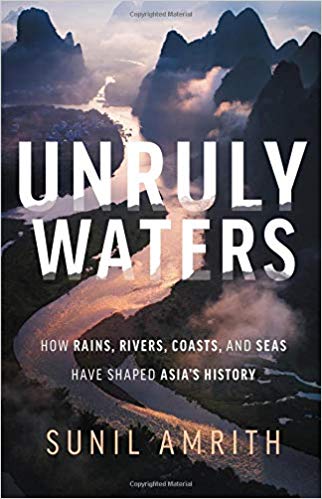 I began reading this book with high expectations. The author is very distinguished: the Mehra Family Professor of South Asian Studies and Professor of History at Harvard University, and a 2017 MacArthur Fellow. The book demonstrates an impressive command of Asian – especially Indian – history and climate-, especially monsoon-related, science. It is very well-written if you like imaginative rhetorical flourishes. I learned a great deal from reading the book, but in the end I was disappointed.

Chapter 1 is an overview of modern Asia and a summary of recent historical trends. It describes the book’s premise as being that the transformation of Asia’s environment, especially the "ecology of water", may be as consequential as the political and cultural transitions we normally hear about. The remaining chapters are not always focused on a specific topic. Broadly, Chapter 2 is built around the career of Arthur Cotton in the first half of the 19th century (among others he completed a large barrage on the Godavari River – the first of many built by the British) to characterize the early British imperial impacts on India, the imperialists’ early engagement with monsoons, the penetration of trade networks from the coasts to the interior, and a growing focus on "mastering the unevenness of water, its extreme seasonality". Chapter 3 describes the impacts of droughts and famines in the late 19th and early 20th century in India and how the British responded (or did not).

Chapter 4 offers an interesting early history of meteorology in India, initiating a topic that permeates the rest of the book: the critical role of meteorology in trying to predict monsoons, and its scientific evolution up to modern times. Chapter 5 among others describes the impact of the Indian Irrigation Commission in the early 20th century, and the growing belief that expanding irrigation was essential to protect India from famine – and continue producing crops such as cotton for British industry. It describes some of the early development of dams, irrigation schemes, and even the initiation of pumping groundwater. Chapter 6, "Water and Freedom", discusses the interactions between the growing Asian nationalism from India to China, the devastating impacts of the Depression on intra-Asian trade, and the nationalists’ wish to harness water to achieve rapid industrialization and 'development'. Chapter 7 discusses the post-independence expansion of dam building in India and China – a phenomenon that "epitomized Asia’s new leaders’ confidence in their ability to tame nature" (inherited from the British in India’s case). This period also witnessed the "division of Asia’s waters" as national borders cut across rivers, creating rivalries between India and Pakistan, and India and China. The huge new dams symbolized the aspirations of Asia to develop rapidly. Chapter 8 turns to two interacting themes: the story of monsoon scientific developments as a result of international cooperation beginning in the 1960s, and the political and economic impacts of India’s droughts in the mid-1960s. 'Utopian' water development schemes continued in the 1970s in both India and China, parallel to the growing understanding of monsoon science and the early recognition of the environmental and social impacts combined with the impacts of climate change.

In Chapter 9, many of the trends discussed in previous chapters become manifest in the form of "Asia’s water crisis". From the 1980s, as demand for water continues to grow rapidly, so did the pollution of rivers, mining of groundwater, and conflicts over water – a "cocktail of ecological destabilization" made worse by the effects of climate change. Although both China and India achieved national food security, all was not well among rural folk. And despite advancements in monsoon science and weather prediction, the ability to predict a monsoon remains elusive. Both China and India remained committed to the same old strategy: large-scale hydraulic engineering projects. Amrith is less than optimistic about the outcomes of such investments or achieving the closer regional cooperation needed to confront water and climate change threats.

A short 'Epilogue' reinforces a rather pessimistic view of the capacity of Asia’s big countries to respond successfully to the challenges of climate change. But nowhere does the author offer any new or concrete proposals for how to rise to these challenges, or what an alternative development strategy might be.

The book is focused almost entirely on South Asia, specifically India, with occasional side trips to China and even more rarely Pakistan or the Mekong basin. It certainly makes its case that the trajectory of attempting to tame Asia’s "unruly waters" is no less important than the usual political and economic transformations that historians normally emphasize. Although it has a large bibliography and draws on archives and other unpublished sources as well as published literature, it is not 'academic' in the usual sense. It is a fascinating though meandering trip through the early history of meteorology, its links to both colonial and modern water developments, and their roles in political and economic trends in South Asia. If you are interested in these things, by all means read the book. But if you seek a deeper and more analytical perspective in the role of Asia’s unruly waters in its history, you may be disappointed.