The unquiet river: A biography of the Brahmaputra (Saikia, 2019) 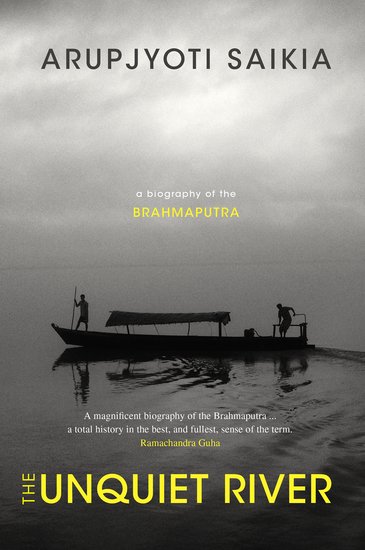 To cite this Review: Jha, R. 2020. Review of "The unquiet river: A biography of the Brahmaputra", Oxford University Press, 2019, by Arupjyoti Saikia, Water Alternatives, http://www.water-alternatives.org/index.php/boh/item/143-brahma

The mighty Brahmaputra River that rumbles through the narrow Assam valley in North East India is the topic of Arupjyoti Saikia’s monumental environmental history, The Unquiet River. For Saikia, the muscular and temperamental flow of the Brahmaputra has, thus far and oddly enough, evoked a confused response. While held in wonderment, feared and celebrated in literature, folklore, music and myth, the Brahmaputra, as an intimate everyday reality for the Assamese and as a spectacular force of nature, rarely finds place in the region’s historical imagination. Histories on Assam, in other words, have been for the most part eerily silent about rivers. Instead, and overwhelmingly, historians have tended to craft narratives, tell stories and plot events by fixing their gaze steadfastly on the rolling hills and flat flood plains.

The Unquiet River, in a contrasting revisionist mood, argues for a striking reorientation. In contrast to talking about Assam’s many pasts in a dry and land based manner, Saikia believes that it is now "time to a take a boat to the middle of the river…or even get our feet wet in the shallows" in order to now "reframe Assam’s history with the river at the centre" (p.xxv). As if intending to metaphorically mimic the Brahmaputra’s wide channel, The Unquiet River sprawls across 600 odd pages with maps, figures, drawings and photographs that illustrate and animate the text that is structured in twelve chapters thematically arranged in four parts.

The first part, comprising four chapters, discusses the Brahmaputra as a physical product of geological time. By rehearsing the studies of various geologists and natural historians, Saikia is keen to underline that the river needs to be grasped as a dynamic fluvial force that has been repeatedly altered by a range of geological pressures and actions. Not only does the Brahmaputra and its tributaries "constantly make and unmake the floodplains" (p.31) but the entire region itself has been knocked about by earthquakes, erosive actions, floods and climatic events. Saikia traces and explains the diverse patterns of human settlement in the floodplains and the neighboring hills in relation to such environmental dynamism ─ changing landforms and shifting riverine behavior. The idea of the river as a critical resource for determining political outcomes is further elaborated in a wonderfully insightful exploration of the native boat making industry (p.92). The cultural centrality of these native boats and their importance to acquiring and holding on to power in the valley began to fade away only when the British introduced steamers and modern ships in the mid-19th century (p.165).

The second part of the book, comprising two chapters, highlights how the Assam valley was drastically re-imagined during colonial times. Saikia notably flags how the arrival of the steamers ended up not only accelerating the volume of trade in the valley but also led to entangling the entire region within new global networks dominated by European commercial interests. A rapid growth in trade unsurprisingly ended up stoking intense anxieties about geopolitics in relation to the British colonial need to bring the adjoining country of Burma under control and to keep a check on China. Amidst these political changes, the British remained focused on treating land as their primary means for generating revenue. The Brahmaputra river, on the other hand, was increasingly treated as a 'highway' of sorts for the transport of goods and people. The voluminous steamer traffic, Saikia points out, proved critical to the making of the modern Assamese identity.

The third part of the book, made up of four chapters, explores the social and political complexities brought on by the Brahmaputra’s inherent environmental dynamism  ̶ the regular re-arrangement of the floodplains by the sudden emergence and disappearance of the chars and chaporis (river islands). The introduction of cash crops like tea and jute into the valley by the British, Saikia claims, ended up radically transforming the traditional ecological interplay between the river and people’s livelihood strategies. Saikia notably discusses relationships to annual floods: while these were traditionally welcomed for their fertilizing silt, they started being considered as calamitous events by the colonial power following the change in cropping patterns.  In this section of the book, the eight and the ninth chapters further extend the discussion on ecological transformations brought by colonial interventions and their consequences. Tea plantations, for example, were found to be unsuitable for the floodplains and steadily shifted to the hills. In their place, jute cultivation was introduced and Assam became a major supplier to the jute processing industry in adjoining Bengal. But in the search for fertile land for cash crops, Saikia is keen to underline that the Brahmaputra gets further marginalized in the imagination of colonial officials who increasingly viewed floods as a disruptive force. The consequences and aftermaths of the four earthquakes of 1897, 1905, 1934 and 1950 are ably reviewed in the tenth chapter. Saikia compellingly points out how these tectonic shocks woke up the colonial authorities to the fact that the Assam valley was geologically active and fragile. The earthquakes not only altered the Brahmaputra’s flow regime and brought about profound changes in the landscape but also opened up the region to a fresh phase of colonial scientific enquiry and study.

The fourth and final part of the book traces how ideas for the technocratic control of the Brahmaputra emerged in the colonial period and were consolidated in post-independent India. Efforts to pursue ‘engineering corrections’ for overcoming the devastations brought by annual floods were central to these interventions. Saikia provides a riveting account of how the debate over the need and utility of embankments went back and forth between various engineers, academics and sundry experts throughout the twentieth century. This technocratic view, however, failed to take into account the hydrological and geological complexities of the Brahmaputra, which continues to confound and perplex all efforts that strive for the singular domination and control over the river.

In a perceptive Afterword, Saikia draws upon his richly textured and detailed historical account to set up an informed engagement with the intense contemporary politics around climate change impacts in the Assam floodplains and recent quests for building hydro-electric dams over the Brahmaputra. While acknowledging that ‘the destiny of Brahmaputra in the twenty-first century’ (p.506) might well be further subject to the interventions of engineers, international financial agencies and governments, in Saikia understanding, their efforts seem almost fated to fail against the river’s geological complexity and fluvial strengths. The final lines aptly recall Mark Twain’s words on the Mississippi river, e.g. that it "will always have its own way; no engineering skill can persuade it to do otherwise" (p.512).

The Unquiet River is fluently written and compelling. It is a scholarly contribution that will certainly contribute to changing the ways in which Assam’s histories can be written. In dissolving the sharp conceptual boundary lines between land and water, history and geology, human and the non-human, Arupjyothi Saikia helps us understand why the Brahmaputra is perhaps best grasped through a biographical account of a mighty river.