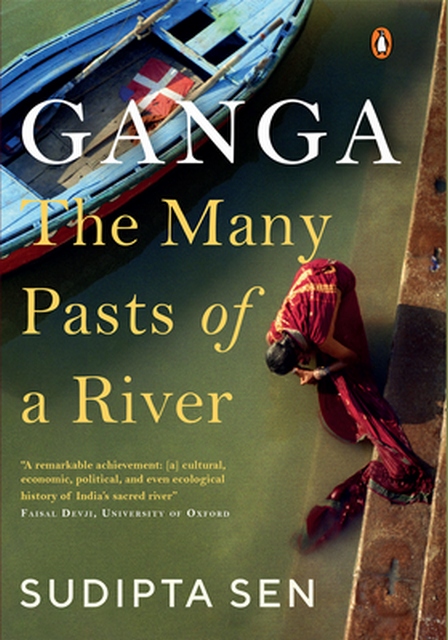 To cite this Review: D'Souza, R. 2020. Review of "Ganga: The many pasts of a river", Penguin Random House India, 2019, by Sudipta Sen, Water Alternatives, http://www.water-alternatives.org/index.php/boh/item/156-ganga

Forests and forestry have held centre stage in writings on the environmental histories of South Asia. In the past decade or so, however, attention within the field has increasingly turned towards rivers. A mood shift that Sudipta Sen’s Ganga: The Many Pasts of a River sagaciously speaks to and brings under fresh scrutiny.

How does the changing flux of a river relate to the measured flow of time? Can the immensity of the Ganga as a sprawling river system be grasped by the straight and narrow of linear history? While animated by such quandaries, Sen’s Ganga: The Many Pasts offers a philosophical resolution in the epilogue, where it is persuasively averred that the river is possessed of ‘two opposing bodies’ (p.344). A ‘beguiling duality’ that allows the Ganga to be fervently worshipped for its symbolic powers, even as its material realities, especially in recent times, have been marred by remorseless pollution and uninhibited environmental degradation. The Ganga, thus, as a profound disconnect between the sacred and profane, Sen contends, reveals its ‘many pasts’ to us only through the lens of heterogeneous time ─ a mosaic that is the synchronous weave of the mythic, cosmic, geologic and the historic.

Ganga: The Many Pasts comprises nine core chapters, which are copiously referenced with archival findings, literary sources, vignettes from travelogues, accounts of the early chroniclers, allusions to myths, fables, legends, poetic imagery, folk imaginations, scrutiny of British colonial records and engagements with contemporary scholarship. Though awash in detail and given a voluminous feel, the overall narrative actually splits into three elegant thematic blocs that are sequenced as the Ganga’s natural topographical divisions: the Himalayan mountain range, the fertile alluvial flood plains and finally the dynamic fluvial stretch of the Bengal delta.

The first theme is set up as a three-way conversation between the river’s emergence in deep geological time, mythologies on the ‘descent of the Ganga’ and prehistoric human settlement on the plains. While geologists have traced the glacial origins of the Ganga to tectonic thrust and sediment movement, the mythic and legendary origins of the river, for Sen, unravels, in striking contrast, to collapse the nature and culture distinction. Though pointing out that several fantastical versions exists ─ of how King Bhagirata brought down the beauteous Ganga from the heavens onto the matted locks of the great god Shiva before racing her raging waters towards the Bay of Bengal ─ Sen draws our attention, instead, to the river’s many meanings as a flowing force. In particular, the spiritual overlap that the soul’s (atman) cycle of birth, life, death, rebirth and deliverance has in resonating with the Ganga’s ceaseless recurring flows between mountain, plain and sea. These cosmic and mythical framings of the Ganga’s material and fluvial realities, moreover, according to Sen, principally drew upon the imaginings and imagery of the seminomadic hunter-gatherers, who were steadily learning to harness the resource rich environments of the flood plains. In effect, it was the mystical worlds of the earliest settlers with their pantheon of fertility figures, guardian deities and animistic cults (pg. 45-71) that not only helped anthropomorphize the Ganga but also generated a moral reckoning around the river through wraths, curses, boons, austerities and sacrifices.

From the 6th century BCE onwards the flood plains were materially transformed through the widespread cultivation of rice (Oryz Sativa), use of iron, an increase in agrarian surpluses, growth in trade, the advent of the urban economy and the flourishing of new religions such as Jainism and Buddhism. This phase, furthermore, was characterized by the breakdown of the previous Vedic order of tribes, lineages, clans and chieftaincies, their violent absorption into larger monarchical kingdoms and a sharp turn towards a ‘political order based on territory rather than the principles of kinship’ (pg.111). The implications of these tumultuous material and cultural changes comprise the second theme, with Sen explaining how the Ganga’s symbolic powers proved critical in shaping several kinds of political imaginaries.

The Buddhist monks, notably, through their travels across the length and breadth of the fertile valleys, Sen tells us, created a ‘dense patchwork’ (pg.186) of sacred sites, fostered animist and spirit traditions, laced routes with reliquaries, built monasteries and thereby sanctified the river and its environs. By the time of the ascendance of the Gupta dynasty (3rd to 5th CE), the Ganga acquired the aura of an auspicious river and its evocative aquatic iconography soon became the ‘ultimate prize’ (pg. 189) for those assembling imperial authority. Motifs of the Ganga, in fact, were much sought after as they provided political legitimacy for ruling aspirants in places as far away as the Deccan and South India. But also striking is Sen’s brilliant exposition of the phenomenon of ‘spoliation’ (pg. 224-35) ─ the desecration, looting and seizure of objects. In particular, he points out, how temple idols, ornaments and artefacts carrying the imagery of the Ganga were frequently pillaged by warring kings and challengers, who sought to fabricate their sovereignty through such acts of violence and raiding.

Under the third and final theme, Sen dwells on a fresh political and ecological momentum that was initiated with the arrival and conquests by Muslim warrior aristocracies from the 10th century onwards. Starting with the Delhi Sultanate (1206-1526), he notes, there began a ‘gradual, irreversible transformation of the agrarian ecology of the Ganga plains’ into a new type of society comprising ‘landholders, peasants, traders and military elites’ (pg. 259). Instead of the previous reliance by monarchs and their kingdoms on raid, plunder and the redistribution of spoils, the new Muslim warrior dispensation mostly sought to depend on the regular taxation of agrarian produce. In other words, an unprecedented focus on land revenue now supported the ‘muster, equipment and training of troops, which in turn extended the frontiers of agriculture’ (pg.262).

The fortification of strategic points along the Ganga became critical to reinforcing the incipient agrarian order, with the landscape, especially under the Mughals, increasingly being turned into a patchwork of military garrisons and urban centres. Though locating forts sometimes could also follow from more complex reasoning. The Mughal emperor Akbar (1542-1605), for example, when building the formidable Allahabad fort at the confluence of the Ganga and Yamuna rivers was particularly keen to occupy a spot from which Hindu pilgrims practiced a form of ritual suicide by either decapitating themselves or leaping to certain death into the river’s ferocious currents (pg.292-93).

By the 17th century, the Bengal delta was swamped with European mercantile companies (Portuguese, Dutch, Danish, French, and British), whose boats were busy plying the various tributaries of the Ganga for trade and profit. Sen provides us a lively account of not only how the East India Company transformed itself into a colonial power through commerce but, in a peculiar twist, used those very same riverine trading networks to seize and extend their control over the vast land revenues of the fertile flood plains. Sen, in fact, goes on to then suggest that British India continued with and further deepened the Delhi Sultanate and the Mughal project of turning the plains of the Ganga into an agrarian society. The mighty Ganga, this time around, however, under the aegis of the British Raj was systematically transformed into a modern industrial river: crisscrossed by perennial irrigation schemes, modern canals, railways, steamship travel, aqueducts, culverts, barrages, bridges and weirs. But it is precisely in its latest avatar as a modern river that Sen believes the Ganga, unlike ever before, will be compelled to confront the most intense and growing disconnect between its sacral powers and its material degradation.

Ganga: The Many Pasts is compelling in telling us that the Ganga is most meaningfully grasped only through a qualitative and variegated understanding of the river’s innumerable pasts ─ by weaving mythic and celestial time into narrative history. This is outstanding scholarship, marked by brilliance and brimming with insight. As long as the Ganga flows, so should this magnificent and inspired effort by Sen, also endure.