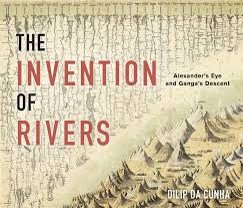 There is an adage often repeated by geographers: the map is not the territory. Dilip da Cunha argues in The Invention of Rivers, however, that when it comes to rivers, they may well be. More precisely, he argues that the lines on maps that delineate water from land also mark the invention of rivers. This invention, da Cunha argues, is a choice not about where to draw the "line separating water from land", but the choice to divide the two at all (p.ix). From this assertion, The Invention of Rivers makes its case for how the Ganges was invented as a river through successive mapping exercises. The account is roughly historical, but often gambols (within both paragraphs and pages) from accounts of military pursuits by Alexander the Great and early Greek mapping practices to British colonialism, the search for the source of the Ganges, and accounts of cities set upon it, notably Benares (formerly Varanasi). These data points crisscross a more familiar structure for a book on water: the course, source, and flood of Ganga. The meandering organization of some sections is not without purpose. Rather, it is designed to unsettle received ideas about rivers and, thereby, to set Ganga within horizons other than those of conquest or colonialism. By the conclusion, da Cunha argues that there is no need to start in the colonial "moment in which maps are drawn, properties are demarcated, the past is described, and future is considered" (p. 279). Rather, da Cunha gestures to an alternative in which there are ways not just of seeing rivers differently, but of seeing different rivers.

What would seeing a different river entail? For da Cunha, it begins thousands of miles away from India, in Mississippi, in a claim that Indigenous peoples in what is currently the United States did not inhabit a world in which even the mighty Mississippi was a river. Rather, da Cunha claims, Indigenous peoples inhabited an "open field of wetness" through which "they saw a different Mississippi, a Mississippi that was not a river to begin with" (p.ix). Declaring that "this was not a fact to verify" but a prompt to think about issues of design, da Cunha advocates a similar treatment of Ganga (p.ix). This large claim about Indigenous peoples, however, needs defending. No evidence is presented, which is striking given that the Inuit are renowned for having invented the kayak and other Indigenous groups in North America (like cultures elsewhere) were masters of building canoes. Outside the Canadian embassy in Washington D.C. there sits Bill Reid’s remarkable piece, The Spirit of Haida Gwaii, a canoe overflowing with an alternate vision for navigating the world (see Tully, 1995 for one account of the teaching offered by The Spirit of Haida Gwaii). It would have been valuable for da Cunha to have researched further. He might have found, for instance, that by 1774 Indigenous peoples—their knowledge and sciences—were key sources for the first maps of western North America’s river systems from present day New Mexico north to present day Alberta, Canada (Binnema, 2014). Old Swan, a Siksika Chief in present day western Canada drew the Ac ko mok ki map showing a network of rivers. That map was based on different principles than those of European cartographers and related rivers not to their source but to features of the landscape that were important for wayfinding (see Armstrong et al., 2009). This was a different way of seeing, but it was not the drawing of lines that made the difference. Nor was an 'open field of wetness' European cartography’s other.

The sharp distinction da Cunha draws between lines that 'invent' a river on a map versus his preferred world of gradated 'wetness' fit his citations to theories of 'culture clash' found in the works of historians like Niall Ferguson and other tellers of grand narratives such as Jared Diamond. It isn’t the most productive use of a review to belabour the shortcomings with sweeping theories that set up a clash between 'the West and the rest'. It is worth noting, however, that moments of cultural exchange are left out of da Cunha’s account. One of note is Ananda Coomaraswamy (1993), whose Yakshas: Essays in the Water Cosmology were written as he worked in Boston as curator of the Museum of Fine Arts where he was also influenced by Henry David Thoreau (cf. Wescoat, 2019). Thoreau, as is well known, read Indian literature extensively. Coomaraswamy’s interests overlap with da Cunha’s efforts to rethink both ancient languages and local idioms through which riverine spaces are known and the histories of alternate orientations to rain, water, and flood that they carry. These form an interesting aspect of da Cunha’s contribution. The hard-line historiography of culture clash, however, forces the evidence into a binary split between either 'lines' that invent rivers or da Cunha’s preferred vision of 'wetness'. History is rarely so neat.

The Invention of Rivers is packed with illustrations; 170 in all and each carefully presented. These provide a visual counterpart to da Cunha’s assertions that to 'see' a river as delineated by a line parsing water from land is a choice about how to see. Throughout the book, there are other speculative claims. One is the account Herodotus gave of his efforts to examine the Nile and his claim that he found explanations of its flooding cycle by Egyptians unsatisfactory. Da Cunha claims this was because Herodotus himself couldn’t conceive that "Egyptians did not see a river because they did not see a line of separation" (p.211). It is difficult to know what to do with claims about everyday Egyptians millennia ago when no archaeological evidence is presented. Speculative claims are too frequent as da Cunha builds his account through discussions about maps, cartography, and hydrology into his argument that there is another way of seeing Ganga—not as a line but as both rain and region. It is certainly important to critically engage cartography, itself so often the handmaiden to colonialism and conquest. Nevertheless, the map is still not the territory and critiquing the map is not the same as understanding the social relations to water over time and space.

Wescoat, J.L. 2019. From Nallah to Nadi, Stream to Sewer to Stream. In Water Histories of South Asia: The Materiality of Liquescence, edited by Sugata Ray, and Venugopal Maddipati, 135–57. London: Routledge.