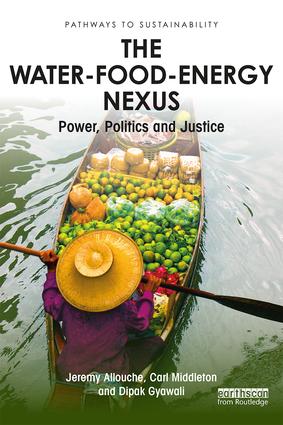 Although water-food-energy nexus thinking can hardly claim to be new wine, the growth of 'nexus literature' in the past ten years is remarkable. It has gained currency as a buzzword with the potential to convene water experts in global jamborees, to elicit books and special journal issues, and to challenge the long-established Integrated Water Resources Management concept as the new champion of integrative imperatives.

The first two chapters of this book take us through some of the historical underpinnings of nexus narratives and how they have become globally hegemonic. The authors emphasise that the nexus emerged from the "cascading global crises in energy, food and global finance in 2008, and a sense of scarcity and insecurity that accompanied it, especially amongst transnational corporations and OECD country governments". This contributes to explaining the promotion of the concept as part of the increasing salience of the corporate world in water policy discussions, and to the solutions advanced to ensure that investments and businesses are not at risk because of lack of water. Borrowing concerns already embodied in the 'water security' concept, nexus thinking emphasises economic rationality, the framing of natural resources as natural capital, and a view of the trade-offs that permeate the global supply chains of water, food, and energy as apolitical and 'manageable' through integrative tools, expert modelling, bureaucratic reforms, and rational efficiency-driven thinking. Unsurprisingly, as the authors illustrate by using the case of the Mekong region, the nexus has legitimised new demands for water infrastructure and technology solutions, a trend that green NGOs have attempted to inflect by promoting the concept of nature-based infrastructure.

The "integrative imaginary" of nexus thinking is also examined through the record of IWRM or adaptive management in achieving sectoral integration: an unimpressive performance that suggests that the more ambitious cross-sectoral nexus framework might just as well largely remain confined to principles. The authors see the nexus as representing the latest incarnation of a series of paradigms described as "a multi-dimensional means of scientific enquiry which seeks to describe the complex and non-linear interactions between water, energy, food, with the climate, and further understand wider implications for society". But the methodological approaches used by nexus research are largely confined to quantitative analyses such as life-cycle assessment, input-output analysis, and trade-off analysis or footprints. However useful they may be, these approaches fall short of questioning who is doing the integration and for whom, how costs and benefits are apportioned, and how qualitative dimensions or the diversity of perceptions, interests, and practices are taken into account.

Exploring the relationships between the nexus and justice- or rights-based approaches, the authors stress that multisectoral integration conceived as an optimising game is poised to once again favour and reproduce existing power asymmetries rather than open space for more complex and democratic decision-making. The authors argue that improving policy integration across sectors is a fundamentally political process requiring negotiation amongst different actors and attention to the voices of marginalised communities – a move that may be enhanced by ethics and a concern for "rendering contesting values visible".

The book does a great job at showing how a water-energy-food nexus approach emphasises demand-led technological and market solutions, downplays supply-side limits, promotes a technical and supposedly apolitical treatment of trade-offs, and largely ignores the political dimensions that shape control over, and access to, resources. But even in its reductionist form of an optimising tool for cross-sectoral planning or business, the systemic complexity that the nexus seeks to address is baffling, and it is no wonder than in practice empirical work focuses on sub-nexuses using monetary metrics.

Given the underpinnings of nexus approaches unpacked by the authors, however, one may wonder whether their call to address complexity by "letting a diversity of worldviews and organising principles express themselves and interact" has any chance to be heard in the mainstream arenas in which the nexus is discussed and promoted. Although it is likely that a more democratic water governance will have to originate from other types of initiatives, exploring the discursive power that shapes and is conveyed by buzzwords is a much needed endeavour to which this short book is a valuable contribution.