Water on sand: Environmental histories of the Middle East and North Africa (Mikhail, 2013) 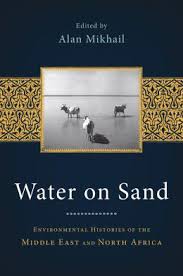 To cite this Review: Simon, S. 2019. Review of "Water on sand: Environmental histories of the Middle East and North Africa", Oxford University Press, 2013, by Mikhail, A., Water Alternatives, http://www.water-alternatives.org/index.php/boh/item/46-wos

Engineering, the economics of scarce natural resources, and hard science approaches seem to be often favoured when exploring the challenges presented by rising water scarcity in the Middle East and North African (MENA) regions. However, many authors (including the list below), have suggested alternative and more socially oriented perspectives to help understand what could be considered some of the most pressing environmental constraints in these complex and geopolitically challenging regions of the world. The eleven authors of Water on Sand have adopted an even rarer perspective: they have focused on the environmental history of the region in an attempt to draw lessons from the past to better face the present water crisis. Through a genuinely interdisciplinary approach, this edited book bases its contribution not only on human geography, ethnography and social and cultural studies, but also on history, socio-political approaches, international politics and environmental policy, even veterinary perspectives, thereby allowing the reader to view this vast arid area with different eyes.

Broadly outlining the MENA region’s environmental history, this book richly complements current research on water in this part of the world; it addresses two major research gaps which are synthesised through two main questions: 1) Why does environmental history need the Middle East? and 2) Why do the Middle East and North Africa need environmental history? The authors answer the first question by establishing that the Middle East and North African region, home to various religious, ethnic and linguistic traditions, is also a region where robust state systems have existed for millennia, and which therefore benefits from having documentary records far longer than that of most parts of the world (except for China). In addition, global movements of trade in the MENA were intertwined with large-scale trends in climate, disease and crop diffusion. Also, our understanding of the environmental history of the world would certainly be enriched by knowledge of irrigation technologies transferred from the Muslim world to Spain (Al-Andalus) and Italy, as well as by knowledge of the history of major waterworks in the Middle East (for example, the building by the Ottomans of the Don-Volga Canal and intensive building of dams during the middle part of the 20th century). Finally, more historical research could help understand Islam’s attitude towards nature protection. In answer to the second question of why this region needs environmental history, the authors emphasise that environmental history allows for key actors (rural communities as well as various species, including domesticated animals) to be taken into account when trying to make sense of the evolution of events in the region. This is an approach that has so far not been explored in sufficient depth, and it deserves more attention.

To a reader interested specifically in water, the introduction of Water on Sand could have provided clearer guidance on how an environmental historical perspective could help us draw lessons on water-scarcity management. While it does not explicitly do this, the mosaic of case studies explored in the book highlights the systemicity of water issues and helps the reader approach them from not-often-used perspectives. The objective of the editor, Alan Mikhail, is to show that there is space for the flowering of new, more historically grounded interpretations of these complex phenomena; his set of stories takes us through a journey of discovery of the evolution of human–water environments. Through the use of observation, anecdotes, poetry, narratives, bureaucratic records, and chronicles recorded on paper, a picture emerges of how populations in the MENA have lived with specific ecological constraints over the past half-millennium, and even more intensively over the last decades. While earlier work focused on showing how communities struggled to survive in the face of enormous environmental challenges, Water on Sand explores how the relationship between humans and their environment has changed over time and the various ways in which human communities have dealt with their ecological constraints: it is a lesson in 'water resilience'.

Besides this optimistic stance, this book pleasantly and continually surprises its readers through its unusual historical approach and its genuine interdisciplinarity.

First, it helps us overcome the preconceived idea that arid zones are mainly deserts. Although much of the region is indeed arid or semi-arid, it is home to a wide variety of ecologies, including plains in Turkey, Iran and Syria, mountain ranges in Morocco and Lebanon, fertile deltas in Iraq and Egypt, and thick forests in Turkey, Lebanon and Iran. The book explores flood events, grassland areas and rich fisheries. It moves away from statistics on the availability, demand and supply of water to better explore which water environments human communities live in and how they survive in them.

Second, the authors use a set of refreshing and surprising terms that attract the attention of the reader. They talk, for instance, of the 'environmental eccentricities' of the Middle East and North Africa (Ch. 1: Eccentricity of the Middle East and North Africa); in particular, they talk of water, grassland and energy, and of the links between them. The reader will be surprised to read of a 'Little Ice Age' in a region one generally associates with heat and dryness (Ch. 3: The Little Ice Age Crisis of the Ottoman Empire).

The authors also increase our understanding of the evolution of technological discoveries by reminding us that many scientific advances took place in the Middle East (Ch. 2: History and Animal Energy in the Arid Zone). Thus, "intriguingly, considering the role millers and water power were to play in the origins of the industrial revolution, key water-driven mechanical processes were usually attested in the Islamic lands of the MENA before they appeared, as borrowed technologies, in Christian European lands" (p. 17).

The book explores subjects that are familiar to Middle East water experts, such as the Aswan High Dam, but it does so using a geological narrative, i.e. exploring the geological consequences of the construction of the high dam, the transformation of landscapes, the transfer of temples, the destruction of the raw material of the domestic mud-brick industry, and the loss of flood-borne silt (Ch. 8: Building the Past: Rockscapes and the Aswan High Dam in Egypt).

Sociopolitical approaches are used to help the reader discover or rediscover issues with an open mind. Thus, Chapter 10 (State of Nature: The Politics of Water in the Making of Saudi Arabia) takes us through an exploration of the environmental foundations of the modern Saudi state and shows us how the convergence of several environmental factors – most notably the pursuit of control over both oil and water – shaped the contemporary political order. Chapter 9 (The Rise and Decline of Environmentalism in Lebanon) focuses on various and varied types of environmental movements in Lebanon; it explains how a range of different actors got involved in protecting the environment and why they did so. Chapter 7 (Enclosing Nature in North Africa: National Parks and the Politics of Environmental History) presents colonialist intervention from an unusual stance; the authors show a few key impacts of national parks (created in the name of 'environmental protection') such as the sedentarisation of nomads, the expropriation of indigenous land and the transfer of the tribal forests of Morocco to the French state.

There are other surprises. In Chapters 2, Chapter 4 (Fish and Fishermen in Ottoman Istanbul) and Chapter 6 (Through an Ocean of Sand: Pastoralism and the Equestrian Culture of the Eurasian Steppe), the place and role of what were often neglected actors in environmental history is described, as are those of animals and of rural communities (such as farmers or fishermen) who lived in and with the environment. The links between environmental factors (notably floods) and human health are explained in the context of Egypt in the late Ottoman Empire (Ch. 5: Plague and Environment in Late Ottoman Egypt). "The cycle of flood, plague, drought, famine, price inflation and death in Egypt at the time suggests that there was a kind of cyclical pathology of the economy that also functioned alongside the ecological pathology of plague" (p. 120). The final chapter (Ch. 11: Expanding the Nile’s Watershed: The Science and Politics of Land Reclamation in Egypt) takes us back to familiar ground with water demand and supply, water transfer and engineering, and irrigation projects; once again (but with a twist), the authors explore the interlinkages between science and engineering through the thematic of land reclamation: the attempt of Egypt’s New Land Development Project to green the desert, the various domestic and international stakeholders it involved, and its limitations.

What is disappointing is that there is no overall conclusion, though this might be explained by the fact that, as mentioned in the introduction, the book’s aim is to highlight the rich potential of the environmental history line of enquiry for the Middle East and North African region, and to encourage further similar research. Since the publication of Water on Sand, however, only a few articles[1] on that region have been written using the environmental history approach, and no collective research seems to have been undertaken. In the slightly longer run, however, new researchers may be motivated to document what could be an important turn in the environmental history of the region being brought about by increasing water stress, new strategies for the promotion of renewable energies in North Africa, debates over 'the end of oil', and the rediscovery of cultural heritage in the context of water management.