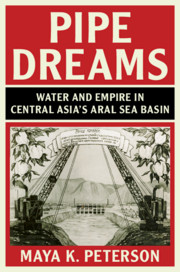 Environmental history is a powerful lens through which to examine genealogies of empire, both in their ideology and materiality. Maya Peterson’s scrupulously researched book Pipe Dreams: Water and Empire in Central Asia’s Aral Sea Basin is an example of how revealing a well-crafted environmental history is to understand the interplay of water and empire in context.

The book stands as an indispensable exploration of the social and environmental change in Central Asia (alternately referred to as Turkestan) that has led to the disappearance of the Aral Sea. Peterson traces the roots of this ecological tragedy from tsarist modernizing visions and imperial incursions of the mid-1800s to the Bolshevik revolution of 1917 and onward through Stalin’s grand projects that transformed the region. Drawing on vast archival research and sources across Central Asia and Russia, Peterson succeeds in forging a rich, authoritative narrative from the perspectives of Russians, indigenous peoples of Turkestan, and foreigners present at the time. Readers with a knowledge of water in the western US and the imperial domination of both nature and indigenous peoples in arid interior basins will find a wealth of fruitful parallels and opportunities for comparative study.

Arguably the most valuable contribution of Pipe Dreams, especially for those with specializations outside of Central Asia, is Peterson’s nuanced analysis of the shifting modalities of water management and empire-building. The book interrogates “standard stories” of water and cotton—namely, those surrounding irrigation to further cotton production driven by the forces of global capitalism and goals of imperial states (24-25). Peterson frames this book specifically in conversation with research by Sven Beckert[1] and James C. Scott[2], building on their work while pointing out their shortcomings with respect to Central Asia at the end of Russian empire and the developing Soviet state. In doing so, the author breaks new ground through illuminating early hybrid imperial alternatives of blended indigenous-Russian governance and varied strategies of subversion and adaptation by Turkestan’s native peoples. Peterson also makes the convincing argument that the ascendance of the Soviet Union constituted more than “the tsarist empire in a new guise” (8), but rather the realization of Russian aspirations of civilizing modernity achieved through a qualitative shift in imperial method: mass mobilization of unfree labor in the USSR for hydraulic construction. This conquering of nature’s ‘productive forces’ through coercive organization of collective labor profoundly reshaped both the geography and societies of Central Asia. Peterson argues that the Soviet state, despite decades of setbacks, was finally able to realize a regional reorientation of Central Asian water resources and agricultural production to cotton, bringing into reality the pipe dreams of tsarist imperial administrators. Peterson demonstrates that this transition was achieved not primarily via high modernist technological superiority, but through an expansive, efficient, and violent social transformation. Collectivization, resettlement, centralization, the focus on ambitious projects, and the propagandized triumph of “the great joy of communist labor” (314) among other elements are explored as to how this labor was harnessed. While these insights are rooted in the Central Asian case, the author provides a brilliant example for environmental histories of imperialism by troubling prevailing historical narratives in context to derive new understanding.

Peterson divides the book in both time and space; the first four chapters exploring the era of the Russian Empire across Central Asia and the final two chapters exploring the initial Bolshevik takeover and eventual Stalinist state until the 1940s. The opening chapter explores how mid-nineteenth century Russian leaders viewed Central Asia, namely as a graveyard of once-great Silk Road civilizations buried by the sands and ready to be restored and civilized through modern agriculture. Irrigation methods and water management indigenous to greater Turkestan are also explored in depth, along with emergent conflict between “scientific” and customary water management approaches, noting the resilience of the latter despite Russian efforts. The book then progresses chronologically by chapter between Russian attempts (often failures) to irrigate portions of Central Asia. Chapter 2 explores the eccentric character of Grand Duke Nikolai Konstantinovich Romanov in the Hungry Steppe near the Syr Darya in the late 1800s. The history follows the Grand Duke’s canal expansions in the region under hybrid “Russo-Asiatic” rule, amounting to fusions of local culture and customs with Russian imperial ambitions, to the degree possible. The next chapter follows the shift from the hybridity of the Grand Duke’s rule and on to a period of assertive colonial rule guided by the modernizing rationality of the Irrigation Age and newly aimed at cotton production. However, despite these efforts, customary water management structures largely remained intact. Shifting northeastward to the Semireche region of modern day Kyrgyzstan and Kazakhstan, Chapter 4 depicts the conflicts inherent to Russian colonial settlement and seizure of indigenous land of semi-nomadic peoples for the irrigation of the Chu Valley. Land seizure resulted in a variety of strategies by native peoples, where some nomads chose to flee across the Chinese border while others claimed land and attempted to subvert colonization through adopting sedentary agriculture. Open revolt was yet another strategy to this assault, embodied in the Semireche uprising of 1916 by the primarily Muslim native population.

The final two chapters shift to the Soviet period. Chapter 5 focuses on the Bolsheviks’ struggles after gaining power, either to decolonize the region or to proceed with modernizing improvements. Official efforts to decolonize Semireche through land-water reforms, for example, ended in goals to sedentarize and rationalize “backward” peoples. Instead of emancipatory social revolution, the Bolsheviks carried forward imperialist tsarist-era notions of extractive productivism through Russian dominance of Turkestanis (though Peterson notes other advances were made, such as expanded rights and opportunities for women). Meanwhile, as war and famine rocked the USSR in its first decade, water managers and engineers were convicted as bourgeois counter-revolutionary utopian fantasizers; scapegoats for degraded irrigation systems, tsarist planning follies, and an endless parade of Soviet bureaucratic entities. The final chapter focuses on Stalin’s Vakhsh Irrigation Construction Project of the 1930s, also known as the Vakhshtroi, that sought to “master” (276) the Vakhsh Valley of the southern Tajik Soviet Socialist Republic (modern-day Tajikistan) along the Afghan border. As described above, this most fascinating section investigates the Soviet state’s strategy of “transforming people through transforming landscapes” (318) using mass mobilization of unfree collective labor. Finally, a brief epilogue outlines the historical progression of water and cotton in the Soviet Union up to the present day, reorienting the reader to the culmination of these processes in the near-total desiccation of the Aral Sea today.

The scope of Pipe Dreams could scarcely be increased any further without becoming unwieldy. However, there are several elements that seem to be lacking almost entirely surrounding the post-1917 Soviet transition. Peterson claims Soviet rule decisively transformed the region into a zone of cotton production, but cotton’s place in the communist economy remains unexplained, as are many details of the political economy of cotton production (with the obvious exception of irrigation). Interwoven Soviet water governance and economic planning in the regionwide drive to produce cotton as a commodity deserves a deeper analysis in this book. More importantly, the book leaves the reader unclear as to the fate of resilient customary water management structures, described in the initial chapters, which tsarist-era Russian administrators left devolved to regional authorities for lack of viable alternatives. Lastly, the maps included in the text are quite challenging to interpret, in contrast to the accompanying archival photographs which perfectly haunt the narrative.

Peterson’s Pipe Dreams is an essential environmental history of water and empire. This wonderfully detailed exploration of co-constitutive social and ecological change in Central Asia from the 1850-1940s provides a political ecology of modernizing hydraulic imperialism beyond global capitalism, as well as indigenous resistance, subversion, and adaptation to these forces.

[2] Scott, J.C., 1998. Seeing like a state: How certain schemes to improve the human condition have failed. Yale University Press.