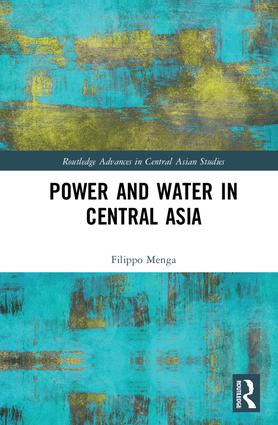 Since the former Central Asian republics of the Soviet Union became independent in 1991, the dynamics of conflict and cooperation around the region’s major transboundary water resources (Amudarya and Syrdarya rivers) has attracted some, though not overwhelming scholarly attention.

The water-related disputes between upstream and downstream riparian states are largely grounded in the conflict between water use for agriculture (downstream countries) and water use for energy production (upstream countries). While some studies have looked at the role of political factors in the water disputes, there was so far no study that analysed in detail how the governments try to achieve and secure their interests in the given unequal and highly politicized setting.

Filippo Menga’s book fills this gap with a study focussed on power asymmetries, (domestic) political interests, and hegemonic as well as counter-hegemonic strategies. The aim of his book is twofold: First, to improve the general understanding of hydropolitics and develop further the analytical framework of hydro-hegemony. To this end, Menga introduces the concept of the ‘circle of hydro-hegemony’, which puts hegemony and not power in the focus, emphasizes the interrelations between different forms of power, and pays more attention to counter-hegemonic strategies. His second aim is to provide an in-depth analysis of hydropolitics in Central Asia from 1991 to 2015. Here, Menga concentrates on two case studies, the disputes around the construction of new big dams between Tajikistan and Uzbekistan and between Kyrgyzstan and Uzbekistan.

This first chapter of the book familiarizes the reader with the politics of international waters and the region Central Asia. Building on the scholarship of Zeitoun, Mirumachi, Warner, Cascao and others, the second chapter outlines the main arguments and conceptions of the Framework of Hydro-Hegemony and stresses the central role of soft power in achieving and maintaining hydro-hegemony. Menga adds two new aspects to this concept: first, by proposing the existence of a ‘circle of hegemony’ he puts a stronger focus on hegemony itself (which he understands in a neo-Gramscian sense) than on the different forms of power as means for achieving, maintaining or contesting it. Second, he draws attention to strategies of counter-hegemony, thus to the tactics employed by weaker states in an international river basin to challenge the status quo – a topic that has received limited attention in the hydro-hegemony literature so far.

Chapter 3 looks at water in Central Asia and the regional arrangements for transboundary waters, which are strongly influenced by the persistence of Soviet regulations and attitudes. While already in February 1992, a few months after the break-up of the Soviet Union, a first water agreement was signed, it resembles those aspects of the former Soviet system that were favorable to the downstream countries, i.e. the water allocation scheme, while it discontinued the water-energy barter regime, which was in the interest of the upstream countries. Despite many more agreements and cooperative efforts, this basic imbalance has continued till today, and has established the downstream countries, i.e. Kazakhstan, Turkmenistan and in particular Uzbekistan as hydro-hegemons. While this chapter is a bit superficial and sometimes inaccurate on the historical and legal aspects, it shows well the general discrepancies and power asymmetries that provide the setting for the attempts of weaker upstream countries, Kyrgyzstan and Tajikistan, to change the status quo and construct new dams for energy production.

Chapters 4 and 5 are the case studies on the Rogun dam and Kambarata dam. The Rogun dam is being built by Tajikistan on the Vakhsh River, a major tributary of the Amudarya, and the Kambarata dam by Kyrgyzstan on the Naryn River, a major tributary of the Syrdarya. Uzbekistan is downstream to both and has opposed them, in particular the Rogun dam. For both cases, Menga analyses the counter-hegemonic strategies focusing on four tactics that represent different forms of soft power (ideational, bargaining and material power):

(1) Internal support (ideational power): both governments effectively presented the dam as absolutely necessary to achieve energy security and used it as nation-building exercise to ensure the support of the population.

(2) Mobilization of financial resources (bargaining and material power): both countries are not able to build the dam without external investments and therefore tried to attract investments from Russia as well as international financial institutions – with limited success, though.

(3) International support (ideational and bargaining power): Both countries raised the issue at the UN General Assembly and other high-level international events. Tajikistan especially reinvented itself as a global water leader through spearheading several UN initiatives on water cooperation, hosting regular conferences and presenting the Rogun dam as a project of clean energy for the benefit of the whole region.

(4) Knowledge construction (ideational power): finally, both countries have also sought to challenge the hegemonic discourse, i.e. Uzbekistan’s warning of the seismic risks and effects on the water regime of the dams, by producing their own scientific studies or relying on international expertise to support their position.

Menga knowledgably describes the use of these tactics in detail, with many examples of the overall regional as well as specific domestic situations in the concerned countries.

The following chapter 6 looks at Uzbekistan and its strategies to maintain its hegemony and prevent the dam projects. Menga shows that Uzbekistan partly makes use of the same tactics, like knowledge construction and seeking international support in discrediting the dams. Another tactic in ideational power is the constant recourse to international water law, since Uzbekistan signed, in contrast Kyrgyzstan and Tajikistan, the 1992 and 1997 UN Conventions. In addition to this, Uzbekistan as a hegemon was also able to use hard power, such as blocking transport routes to Tajikistan and interrupting gas supplies. As for the other governments, the issue at stake is not just a dam, but the symbolic value of it and its effect on the balance of power between the countries.

Menga’s overall, and short, assessment is that despite some small successes on the discursive side, the soft power strategies of Kyrgyzstan and Tajikistan could not change the status quo. As a reader, one would wish to learn more about the how and why of that result and the role soft power can play for challenging or maintaining hydro-hegemony. Does the fading of internal criticism on Rogun in Tajikistan mean that its tactics of creating internal support were successful or is it a mere result of the authoritarian regime where criticism is not voiced? Has Tajikistan’s water-related UN engagement and all the diplomats that travelled to the Dushanbe Water Conferences indeed increased the understanding in the international community for its position? Is Russia’s meandering position towards the hydropower projects a result of the lobbying of the countries or rather of much bigger stakes of Russia in this region, for which water might at the end be not as important as water scholars tend to assume? Does the decision by the World Bank to finance the Rogun assessment studies speak for Tajikistan’s strategy to get the Rogun project taken as a serious option, or for Uzbekistan’s insistence to get an independent study? Interviews and observations in the region could have shed light on understanding better the effect of soft power and its limitations.

Menga’s focus is instead very much on official documents and speeches. Even more, while he initially states that his analysis of hegemony will focus on the ruling elites and hydrocracies, he is de facto looking only at outputs from the Foreign Ministries, Presidents, and prime ministers offices arguing that (at least for Tajikistan and Uzbekistan) the Ministries of Foreign Affairs manage transboundary water issues. However, this captures neither the actual representation of governments in regional water bodies (led by the water ministries) nor the complexity of internal policy making. In Tajikistan, the Foreign Ministry and the Water and Energy Ministry are strongly aligned, with some former water officials having leading positions in the former. In Kyrgyzstan, the Foreign Ministry only more recently got actively involved in water issues and is at constant odds with the Department for Water Resources - a possible explanation why the countries are differently effective in using their soft power.

These points don’t reduce the merit of Menga’s analysis and are rather calls for more empirical research with attention to voices from the region beyond the highest political level to understand how (hydro-)hegemony works.

Finally, it is worthwhile to look at the analysis with a view from 2019. Menga analyses the situation until 2015. In 2016, Uzbek President Karimov died. His successor, a vocal opponent of Rogun Dam while being Prime Minister, made a 180 degree turn in its hegemonic strategies, stopped the opposition towards the dams and even started discussions about participating in their construction. If anyone still needed evidence that the fierce debate around the dams was about everything else than seismic risks or changing water flow, this should be conclusive and calls for further research on the twists and turns of hydro-hegemony in Central Asia.