Proud Country: A portrait of Australia's worst drought in 50 years 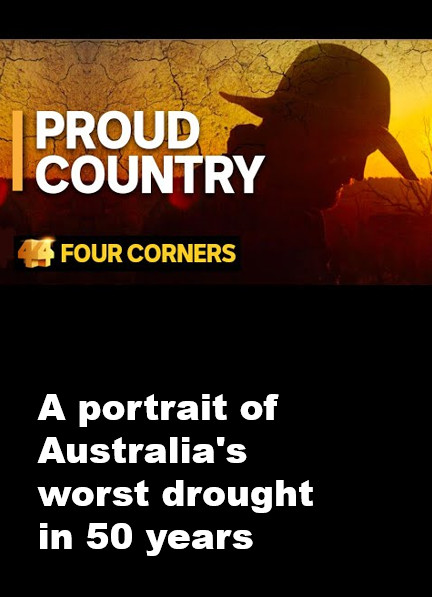 In a series of interviews, reporter Michael Brissenden, in 'Proud Country', illustrates the struggle of families from Quirindi to survive the drought. This is a city of the state of New South Wales in Australia, that has been historically a place for grazing cattle. Although the region has experienced several years of droughts, in 2018 people witnessed what seemed to be the worst drought in 50 years. Although drought can start as a meteorological event, it may also become a complex social and economic issue. The documentary integrates the economic impacts and the social misfortunes faced by Quirindi's population. It demonstrates how the act of surviving drought becomes a challenge that people have to face every day, trying to adapt to new lifestyles and dealing with stress and even mental health impacts. However, resilience is strengthened thanks to the community cooperation and participation.

The documentary explains how several years of drought have affected the Quirindi population and its economic cycle. The costs of grain, cottonseed and hay increased and forced farmers to seek cattle food in other regions of Australia. Tony Jackson (interviewed farmer), who did not use to be a truck driver, now has to travel 2,000 km twice a week to buy hay. The documentary shows the despair of farmers that had financed machinery trying to renegotiate their debts with the banks as their revenue plummeted. Local businesses were also affected due to the lack of money in circulation. The Annual Climate Statement disclosed that 2019 was the warmest year on record since 1902 (Bureau of Meteorology, 2019) and the recent fires that made the headlines globally clearly showed that the drought that ravaged NSW by the time of the shooting has worsened. According to ABARES report, the impact of the drought contributes to the forecast of an unprecedented third consecutive year of falling production in Australia's agricultural sector (ABARES, 2019).

While the economic and environmental impacts of climate change have been broadly studied, only some researches have analyzed the possible impacts on mental health. During last few years this topic has started to draw public opinion attention. This documentary is able to illustrate it in a remarkable way. Dr Luqman Nasar (Quirindi health professional), mentioned cases of depression, anxiety and uncertainty about future among his patients, as a consequence of the drought. This has to do with some recent studies based on rural households surveys concluding that prolonged drought has negative impacts on the mental health of farmers (Edwards et al., 2014). However, in another study, the authors suggest that although there are clear signs of affections to the health and well-being of farmers due to climate change, it seems that their mental health is not worse than the mental health of the general population in Australia. Nevertheless, it is evident that the social and economic disadvantages of the rural population exacerbate its vulnerability. This study also highlights the levels of farmer’s resilience: “The general population may have much to learn from rural Australia about maintaining well-being in the face of adversity” (Berry et al., 2011).

It is inspiring to see how the community works together for the good of one other. The documentary highlights the role of Country Women's Association (CWA) to cope with the difficult situation. CWA collected donations for local businesses to provide services for people in need. This also stimulated business in the town. Trough community activities, like a rugby game of the local team, sharing in family and enjoying out of their “new normal” life, they tried to live moments of happiness. According to a research about the impact of drought on rural families of southern New Wales, Australia, the adaptive resources and psychological strategies are determinant to improve the resilience of farming families affected by the drought. Participation in community events contribute to the ability to deal with the drought (Caldwell et al., 2019).

Freight subsidies, household allowances and loans are available as part of the Australian Government Drought Response, Resilience and Preparedness Plan, although, the eligibility of each candidate is linked to not having off-farm assets. Furthermore, bureaucratic inertia and a lack of quick and timely response compromise the effectiveness of this plan. The documentary reveals the lack of public participation (limited to information provision) in drought policy-making, a low involvement of civil society that undermines the ability to act on growing pressure (Warner, 2006). Former mayor and economist Paul Nankivell emphasizes that the drought policy needs to be integrated with other policies, such as climate change, energy and water. On December 2018, Australian government signed the National Drought Agreement (NDA), which replaced the 2013 one and aims to develop policies and programs that help farmers to manage and recover from the consequences of drought (Department of Agriculture, 2019).

Reporting on real stories and the people who live them, 'Proud Country' connects the with the vulnerability of the human-being. The camerawork is excellent, using good close-up shots to heighten the sadness and tiredness of characters. Wide shots and aerial videography are beautiful and let the viewer feels not only the dry and thirsty land, but also the struggle for survival itself.

The narrative, supported by interviews, makes the story easy to follow. The interviews are touching, reflecting the human weakness in front of the huge power of natural events. The struggle of Quirindi can be seen through the teary eyes of the farmers interviewed. They also show their determination to wake up every day and fight.

The music played during the documentary creates an atmosphere of reflectiveness and concern, making one feel that something bad is happening. However, it would have been good to change the mood in some emotive scenes, such as the rugby game.

This documentary is not addressing the causes of the drought and whether the management of water resources has been sound. It focuses on its impact on a rural community and, although some statistics or supporting data would have strengthened the findings of the documentary, is useful in stressing the economic and mental health impacts of the drought.