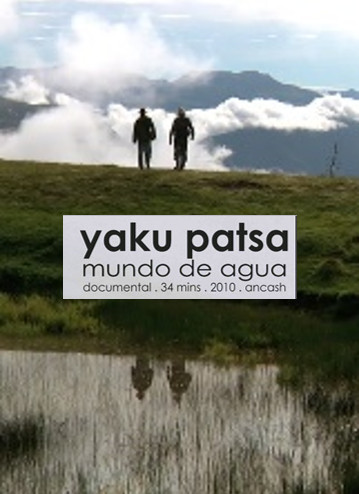 The title of this film is Yaku Patsa which means Water World in Quechua, a language spoken by the indigenous population of the Peruvian Andes. The aim of the film is to show how freshwater shapes the society and history of Andean people. The opening scene of Yaku Patsa is a sensuous image of the way water runs through the breath-taking landscape of the Andes from the top of its mountain peaks at more than 6,000 m. to the shores of the Pacific Ocean. The remaining part of film, which was shot in the northern province of Ancash, is divided into three sections that each illustrates an important aspect of the Andean water world. The first, which is the longest and most compelling part of Yaku Patsa, offers a window onto the role water plays in Andean culture. Narrating in Quechua a local carpenter recalls how people in the past would wait for the rain after they had planted and, in case it didn’t come, how they would ask the mountains for help. To demonstrate how such rituals of appeasement took place the carpenter walks up to a nearby mountain where he and an accompanying friend throw stones into a lake to pay it respect. The film also highlights water’s cultural significance in Andean society by showing how women use it to ferment corn and produce corn beer and by illustrating how corn beer serves as glue in social life and animates people to play music and dance. In the second section, which is the shortest and less exciting part, the film shifts focus from contemporary life in the Peruvian Andes to pre-Hispanic times. Presenting an abandoned ceremonial offering site situated next to a mountain lake that supplies the region with water, the film lends the narrating voice to a Spanish-speaking archeologist who introduces the audience to the local mythology and its association of water with fertility and reproduction. Lastly, the film’s third section, which is the most spectacular but also most protracted part, brings us back to the present showing how Andean mountains, glaciers and ice provide locals with a livelihood as guides for international tourists. While preparing a hot drink from the surrounding ice in the tent he has put up for his client a guide explains how the growing glacier melt in the Andes is making mountain climbing a more dangerous business. In the film’s closing scenery, we watch the guide and his client cross one of Peru’s many endangered glaciers reminding us of the urgency of Yaku Patsa’s message: the Andean water world is disappearing.

Yaku Patsa’s theme is both pertinent and enthralling. Due to global climate change Peru’s glaciers are rapidly melting threatening the country’s future in a number of ways. A large portion of Peru’s population relies on the glaciers’ melt water to not only wash, cook and drink but also irrigate their fields and run small businesses. Moreover, melt water is critical to the country’s mining and tourist industries. Hence, as rising temperatures and irregular precipitation make freshwater as scarce good, Peru experiences a rise in social and political tensions particular in the country’s poorest and marginal areas such as the setting of Yaku Patsa. But the film does not only capture the attention of people interested in water because it addresses an urgent global problem. Its visual presentation of the Andean water world intrigues anybody interested in the way water is embedded in community practices, economic livelihoods and human-environment relations. In a region that suffers from chronic water scarcity and that always has struggle to access and manage water, this resource plays a key role in people’s social organization and cultural imagination. Yaku Patsa’s merit is its illustration how this comes to the fore in the present and the past of Andean society.

But Yaku Patsa also has a number of shortcomings. Most importantly, it lacks contextualization and a red tread that ties the three sections together. While occasionally pointing to global warming, glacier melt and unpredictable rainfall, the film makes no reference to Peru’s water crisis and the economic, social and political circumstances that cause it. Why are Andean people so preoccupied with water? How do they perceive the environmental change Peru currently is experiencing? And how they cope with it? The film’s compelling title uncloaks Yaku Patsa’s storyline but even though this is effectively visualized in the opening scene, the three sections appear fragmented and fail to provide a coherent presentation of the Andean water world. Who is the carpenter who tells the story about the diminishing precipitation and shows us how to ask the mountains for rain? How is woodcutting related to water? Why does he and his companion eat the tuna fruit, which grows on a cactus that thrives in a dry climate and needs very little water? Also, what has music and dancing to do with water or with rain? And who are the people partying featured in the film? Anther more critical question is: How come sheep appear in the pre-Hispanic myth about fertility and reproduction? Sheep were introduced by the Spaniards and the pre-colonial population produced wool from llamas and alpacas. Finally, given that environmental authorities in Peru recommend and, in some cases, forbid human contact with the country’s glaciers in order to protect them, what are the tourist guides’ perspective on mountain climbing and global warming?

Yaku Patsa begs these and many more questions and while it offers a fascinating and vivid vision of the Andean water world, which surely will draw the attention of a non-Quechua/Spanish speaking audience unfamiliar with Peru and the Andes, it makes little effort to contextualize Andean water, socially, politically and culturally, and falls short in tying its three sections together in a single storyline. But then, for people who are eager to know more about the fabulous nature of water and to dwell on the rich culture and history of Andean people, Yaku Patsa could be a good start. Rather than presenting science-proof knowledge its contribution is to arouse curiosity and raise unexpected questions while leaving the search for answers to the audience. One technical caveat: the English subtitles of the Quechua-speaking narrator are unclear and pass so fast that the viewer may find it hard to read them; so be attentive and stay alert while watching Yaku Patsa!

-----. 2016. “Harvesting Water for the Future Reciprocity and Environmental Justice in the Politics of Climate Change in Peru.” Latin American Perspectives 43 (4): 56–72.