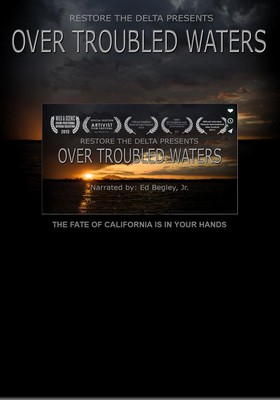 The grassroots organisation, ‘Restore the Delta’ produced Over Troubled Waters to promote their activities in relation to the Sacramento-San Joaquín Delta. The film tells the story of contested water rights from the perspective of the local users who believe their rights are being supplanted by the power of big agri-business and thirsty, water-intensive cities in southern California. They focus on the state government’s responsibility for sanctioning the deterioration of the Delta through permits for water exports and expose many of the knock-on effects this has on the environmental health of the Delta, and the people who depend on it. It is a compelling story, but one that fails to suggest realistic solutions to the challenges presented, and which perpetuates ideas of the past that are more romantic than factual.

The film is shot in a clearly suggestive manner, with viewers’ minds framed first by golden sunsets and sweeping views of glassy water, undisturbed by human interference. As the camera moves further downstream, the images become less attractive – and viewers are introduced to the problems of California’s well-known food (and virtual water) exports, and the grey infrastructure built to support it.

The impression that is generally built over the rest of the documentary is that globalisation and the demand for produce is partly to blame for the partitioning of the Delta. The menace of the outside world is further exemplified by recounting the invasive plant species that have arrived in the delta by hitchhiking onto international ships and thereby linking the waters biologically with the rest of the world.

The infrastructure has enabled famers and households and industrial agriculture around the state to benefit from water in otherwise arid landscapes and, in turn, damaged the quality of the Delta ecosystem. Generally, this conflict of interests is underplayed, as the balance tilts towards the latter. One solution proposed is that the farming lying close to the Delta should be of lower value in a hierarchy of rights to the Delta’s water. But is this a realistic model for determining water rights, particularly when the economy of these lands are so embedded in international virtual water markets?

The film is equally selective with history. It portrays a golden age of harmonious coexistence between humans and the Delta ecosystem dating back to 1800s. As such, the much longer history of the perpetual loss of ancestral lands of the Winnemem Wintu tribe is omitted. In fact, the name title captions are particularly telling, with the white settler farmer labelled as “Delta native and advocate” and the native tribal chief, a “spiritual leader”.The Winnemem Wintu’s claims have been delegitimised by the state, and these power relations are reproduced in the documentary through prioritisation of the rights of the 19th Century settler farmers and fishermen, and more recently the environmentalists.

The stories of local farmers, fishermen, environmentalists, Indigenous peoples, businessmen, scientists and politicians are told through short clips during the documentary, showing the range of the multiple economies that use the water. However, it is the local farmers, fishermen and environmentalists who are presented as the rightful guardians of the water, centring on their interests in improving water quality for better fishing, sustainable irrigation opportunities and biodiversity. The voices of the senators, a journalist, a fish biologist and others are used to bolster this argument.

The Winnemem Wintu are cast as the voice of nature, espousing the critical importance of healthy salmon migration for cleaning water, maintaining healthy soils, and supporting trees and plants. This may give the tribe a ‘place at the table’, but they end up entrenching essentialised Indigenous vs Western knowledge claims familiar to many struggles for Indigenous rights. Their voice is used to support calls to protect the health of the delta from a fishing rights perspective, for example, without mention of the “cultural genocide” (Dallman et al, 2013, p. 38) that took place with the construction of the Shasta Dam in 1945. This saw the forced relocation of numerous villages and the inundation of over 250 sacred sites. The result is a re-enforcement of a hierarchy of rights where the settler fishermen have greater claims to the water than the ancestral claims of the first nations (for whom salmon fishing is historically central to their way of life).