Governance of a transboundary river: The Rhône (Bréhaut and Pflieger, 2020) 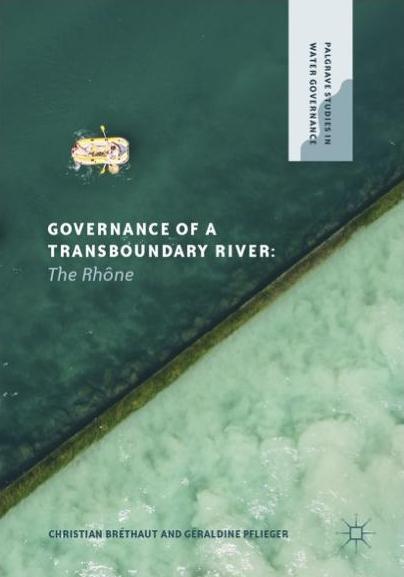 To cite this Review: Bravard, J.-P. 2020. Review of "Governance of a transboundary river: The Rhône". Palgrave-MacMillan, 2020, by Christian Bréthaut and Géraldine Pflieger, Water Alternatives, http://www.water-alternatives.org/index.php/boh/item/119-rhone

Few studies have dealt with the transboundary governance of the Rhône River and this book is the first one to specifically deal with this subject. The authors belong to the University of Geneva’s Institute for Environmental Sciences (UNESCO, Chair in hydropolitics). Their book stems from a research project (GOUVRHONE) funded by Swiss and French partners and carried out from 2012 to 2015.

The research project followed a crisis situation related to a controversial sediment flush that took place after years of procrastination (sediments transported from the Mont Blanc massif by the Arve River to the Rhône River are first deposited in the Swiss Verbois dam and then need to be flushed regularly through a series of dams further downstream to maintain the storage capacity of the dams and electricity generation). For the authors, the reason why this sediment flushing was controversial related to the fact that water governance of Geneva Lake and the Rhône downstream of the lake has no common framework agreement but is rather based on distinct specific agreements that define a “loosely co-ordinated polycentric governance system”. The authors considered the wider question of transboundary water management of Geneva Lake and the downstream Rhône, France,  as relevant both in the context of climate change and the liberalization of energy production in Europe. The ambitious objective was to analyse past and present situations before proposing governance scenarios for a changing future.

The book begins by a state of the art of water governance since the 1990s. General models, questions of scale and relevant territories, public policies, conflicts and cooperation are presented in a literature review. The second chapter makes a theoretical distinction between the 'integrated management regime', the 'mono-functional' and the 'polycentric' ones. According to the authors, the Rhône belongs to the mono-functional regime because its regulation depends on agreements between energy producers of the Rhône, with little involvement of other stakeholders. The authors argue this is why they adopted an analytical approach at territorial scale, upon which the identification of stakeholders is based, and that "a historical perspective is vital to any in-depth analysis of transformation and rescaling processes" (p. 22). The authors explain that understanding the governance of Lake Geneva and the Rhône involves studying hydropower generation, the Geneva lake levels and flow-rates of the downstream Rhône, sediment management along the chain of dams, water abstraction for a variety of uses, and the regulation of extreme flows.

Chapter 3 is well documented on Lake Geneva and on the Swiss reach of the Rhône with a detailed analysis of historical developments on legislations and dams, of the intercantonal agreement for regulating the Lake water levels, and of the Emosson Convention ruling the diversion of water from France through Lake Geneva. The authors could have given further information on why France was not involved in the negotiations regarding the regulation of Lake Geneva levels. This is largely linked to decades-long disputes between the cantons of Vaud (Lausanne), Geneva and Valais regarding high water levels threatening the Lake coast; France was not invited to participate in the negotiations and, for understandable reasons, did not wish to. The regulation, elaborated as early as 1884 and slightly adjusted later, aimed at limiting high water level (flood level) and at ensuring that minimum levels would not be too low (for better resorts aesthetics); this means reducing the volume that the lake would be able to control in case of floods. While it did not contribute to negotiations over the Lake’s water levels, France observed that, during extreme floods, Geneva de facto managed the lake in a way that fit France’s interests concerning the control of peak flows. The case of high-altitude reservoirs in the Swiss Alps (the first one was built in 1902) is not discussed in the book, which would have been interesting. Indeed these reservoirs deeply changed the hydrologic regime of Lake Geneva and of the Rhône downstream from the 1950s onwards. Their volume is three times higher than the volume corresponding to annual changes in the water levels of Geneva Lake and their management is of crucial importance. Regarding this point, as long as water abstraction did not significantly impact the Rhône discharge, and as long as Geneva controlled the Lake outlet for energy production, and because the dams managed by the National Rhône Company (CNR) provided adequate solutions to navigation challenges, French authorities scrutinized changes and delegated operational issues to energy producers. Chapter 3 also puts forth the idea that the CNR lost its energy production monopoly in the 1970s in relation to the development of nuclear power plants managed by Electricité de France (EDF). However, hydroelectricity was produced at the Jonage-Cusset dam as early as 1899 to meet the needs of the city of Lyon and the dam has been managed by EDF since 1946. CNR, hence, had lost its monopoly earlier than the 1970s. Also, the second reason why CNR lost its importance was not because "the central government decided to promote navigation downstream of Lyon" as argued in the book. In fact the Ministry of Transport promoted navigation, by diking the river, since the 1840s and struggled to defend it against the emerging and triumphing railway companies. The French government aimed at ensuring and improving navigation, which was required in the franchise awarded to the CNR. Indeed, since 1934, CNR development schemes fulfil three objectives (transport, irrigation and hydropower), the latter being expected to pay for the investments made to achieve the first two goals.

While historical aspects are well studied for the Swiss side, as far as France is concerned, the authors mostly focus on the last 20 years and most of the information has been obtained through interviews. This is all the more questionable as nobody from the CNR, the most important stakeholder in the Rhône hydro-energy sector, along with the administration and the Rhône-Mediterranean Water Agency, was interviewed. Some assertions concerning the French Rhône could have been checked. The issues of water pollution (including in Geneva), drinkable water in Lyon, environmental policy, etc., do have a longer history than stated in the book. For instance the issue of sediment flush control at Verbois is not related to a 2003 event but to bacterial pollution in the 1960s and to a dramatic mistake made in 1978 when the managers of the Génissiat dam (a key site for the management of the French Rhône, downstream of Verbois), were not informed of the Verbois dam closure and maintained Génissiat dam open; the Génissiat reservoir emptied and a huge amount of fine sediment was released downstream. Impacts were dramatic (and could have been worse) on fish-fauna, drinkable water in Lyon, dam siltation, with threats on the cooling of Bugey nuclear plant. The 1978 event was not really publicized for a range of reasons. Stakeholders minimized external communication concerning the severity of issues related to nuclear power and drinkable water in order to avoid frightening the public. This does not mean that those questions are absent in the negotiations. Further, the "emergence of complex rivalries" between Swiss and French authorities is not a sudden one, as proposed by Berthaut and Pflieger. Rather, since the 1890s multiple meetings have brought together concerned stakeholders to solve emerging and pending challenges and differences in interests have a long history. Those negotiations are most discrete, maybe too much for the public, but this issue is beyond the scope of this review.

To conclude on this point we suggest that the book could have been shortened on some aspects (such as the factual information concerning lake levels management), and could have been expanded by giving relevant historical and scientific references on others. French articles and books are easy to find, however no more than three publications concerning the Rhône downstream of Geneva have been analysed and quoted; the authors could also have analysed public archives as done by Bravard J.-P., 1987: Le Rhône du Léman à Lyon.

The fourth chapter is an analysis of the emergence of multifunctional transboundary governance. While the SIG (Services Industriels de Genève) are under the authority of the federal government and the Geneva’s canton, the authors argue that the multiplicity of organisations found in France limit the capacity of public authorities to manage the Rhône. This is questionable because all franchised stakeholders, the CNR and EDF in particular, really defend the common good under State supervision until now. In any case, the authors present an array of possible solutions for building up a common framework for transboundary negotiation, considering that it is a necessity, but leaving it to the stakeholders to make use of the proposals they make.

In conclusion, the idea that the need for transboundary governance stemmed from the difficult implementation of the 2012 flushes is questionable. Instead of keeping a three years pace that had been adopted after decades of trials-and-errors approach, the time span between flushes rose to 9 years, mostly due to Geneva’s ambitious environmental policy. This extension of the duration between successive flushes certainly precipitated the crisis, but stakeholders had been long aware that transboundary governance was needed and it actually took place though often not visibly. The position of the reviewer is that accounting for long-term history in the Lake Geneva-Rhône can help sustain and improve the present "multifunctional transboundary governance", which appears to be continuous, pragmatic and fruitful. Switzerland and France may agree on a more integrated regime of governance in the next decades. Indeed, further decrease in the low discharges due to climate change and high altitude reservoirs are likely to trigger significant changes in the governance regime. Because of EDF's requirements in terms of minimal discharge to cool nuclear power plants, low discharges are likely to become a key point of any future governance mechanism.