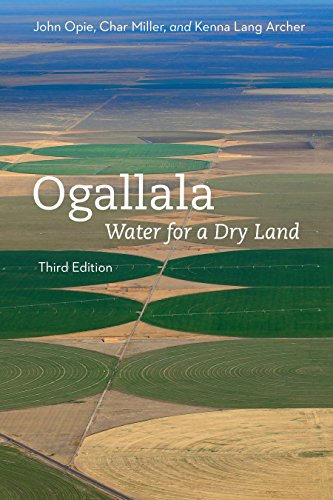 The Meadows Center for Water and the Environment and the Geography Department, Texas State University, San Marcos, Texas; robertmace@txstate.edu

When early European explorers first saw the High Plains, they were not impressed. Featureless and seemingly endless with no evidence of water, humans avoided the plains for fear of getting lost and dying of thirst. Mapmakers later bequeathed the plains as The Great American Desert that, in the words of Captain Randolph B. Marcy in 1849, was "…a region almost as vast and trackless as the ocean—a land where no man, either savage or civilized, permanently abides; it spreads forth into a treeless, desolate waste of uninhabited solitude, which always has been, and must continue, uninhabited forever…". Over time, lured by ephemeral above-average rainfalls and land boosters crowing, "The rain follows the plow!", settlers began to stake claims, first along the few rivers that crossed the plains and then onto the uplands. Farmers began to realize that not only was there water beneath their feet in the Ogallala, the primary water-bearing formation beneath the High Plains, but that there was a massive amount of it. With advances in drilling and pump technology, production of groundwater from the Ogallala soared in the 1950s, transforming the High Plains from the Great American Desert into the Great American Breadbasket.

Opie and others (2018) provide an environmental history and historical geography of the High Plains Aquifer. The book is a non-technical narrative, loosely flowing from one grain of knowledge to the next while generally moving from dryland farming to irrigation to groundwater mining to the inevitable return of dryland farming. Over nine chapters, the authors discuss the beginnings of irrigation between 1870 and 1940, the Dust Bowl, the pumping boom fueled by technological advances in pumps and irrigation methods, the activities of seven water conservation districts, a family story, water-use efficiency, and climate change, thus moving from the past to the present to the future.

John Opie published the first edition of this book in 1993 and then updated the narrative through mid-1999 with a second edition in 2000. A great deal has happened in the Ogallala since 1999, namely a long-term drought not seen since the 1950s, a high-profile attempt by T. Boone Pickens to export water from the region, attempts to better manage pumping in the aquifer, and new science on climate change and what it means for the High Plains. With this third edition, John Opie worked with co-authors Char Miller from the Pomona College in California (formerly a professor of history at Trinity University in Texas) and Kenna Lang Archer from the History Department at Angelo State University in Texas to address these new developments, among others, and extend the story of the Ogallala through mid-2016.

As a student of hydrohistory, I found a lot to like in this book, particularly the early stories of groundwater development in Garden City, Kansas; the first use and limitations of windmills for agriculture; and the early, prescient foresights of Frederick H. Newell (who foresaw groundwater-fed agriculture) and Walter Prescott Webb (who foresaw sustainability issues) on the High Plains. The more contemporary management stories are also interesting, such as the inspiring, but ill-fated, efforts of Wayne Bossert in Kansas to manage to zero-depletion as well as the more recent but similarly ill-fated attempt of the High Plains Underground Water Conservation District No. 1 to manage pumping. The book also has the most complete story of T. Boone Pickens’ water marketing, accurately putting it in the broader context of groundwater purchases by the Canadian River Municipal Water District and the groundwater marketed by the Abraham Brothers out of Canadian, Texas.

Unfortunately, the book perpetuates the myth that there’s not much recharge to the Ogallala Aquifer, a "paltry one inch". However, that one inch is about 5 percent of rainfall (typical for a sandy aquifer) and, when applied to the full surface area of the Ogallala, amounts to 9.3 million acre-feet of water per year. That’s a lot of water! Recharge to the Ogallala only seems low because people compare it to truly massive amounts of pumping from the aquifer. In Texas alone, pumping is about six times greater than recharge, constituting 40 percent of all the water used in the state. Year-on-year water-level declines occur not because recharge is so low, but because pumping is so high.

What is happening to the Ogallala is a creeping disaster as we gradually deplete the aquifer and slowly convert from irrigated agriculture to dryland farming or prairie. In some ways, the creepingness is a blessing — dispersing the economic impacts on more than $200 billion of agricultural worth over decades instead of a one-time catastrophe. But the effects on lives, local culture, and the world’s food supply will still be felt one dining room table at a time. On the other hand, the full economic value of the water stored in the Ogallala would not have been realized if it had been managed sustainably from the start. Nonetheless, here we are: watching an area we turned from the Great American Desert to the Great American Breadbasket back into the Great American Desert. Ogallala: Water for a Dry Land nobly documents the push-pull of people, policy, and politics as this transition happens.