Water, sustainable development and the nexus. Response to climate change (Grover and Alfarra, 2019) 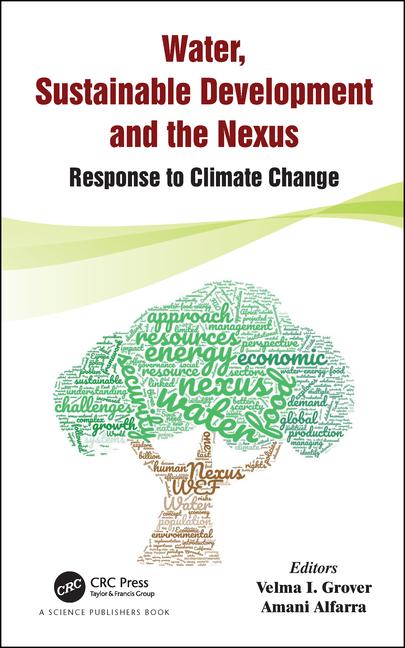 This book, to which eighteen authors contributed, is part of a series titled Water: Emerging Issues and Innovative Responses. Its starting point is that Integrated Water Management seems to be too vague for policy makers, who might better understand (and implement) it through addressing three global imperatives for tomorrow’s world (water, food and energy security) as well as the linkages between them. This approach, however, is not new. As the book itself highlights, the Bonn 2011 and 2014 Nexus Conferences (and "several initiatives in between") both already emphasised the importance of cross-sectoral policies and international cooperation "for the successful  governance of risks to the management and sustainable supply of water, energy, food and ecosystem services" (p.51).

The Introductory section I on the 'alternative perspectives' that could be used to help address the nexus is disappointingly unoriginal. The introduction does not consider any radical re-thinking of the design of economic-environmental strategies (through approaches such as ecological economics or agro-ecology, for instance) or the need to value indigenous approaches to the nexus.  A 'firmer', more assertive and questioning, critical attitude would have been welcome and could have been made more visible throughout the book. As it stands, 'Water as a human right' is not used as a concept that would underpin and justify any new perspective or methodological approach to the nexus but, instead, is set aside as a two-chapter section which appears much later (Section 3). The same happens with water security and water education.

Section II offers five interesting Case Studies that implement a nexus approach in quite different ways. Chapter 4 focuses on Sub-Sahara Africa and highlights many interesting (although each taken in isolation) critical issues that are jeopardising either water, food or energy security. Alternative approaches that highlight the potential for integrating the various components of the nexus are, regrettably, limited.  Chapter 5 on European approaches, though a bit short, neatly highlights how synergies have been created between water, energy and agriculture in the European policy framework. Neither Chapter 4 nor 5 address the tricky issues of world trade, import-export of food, or geo-political constraints behind the General Agreements on Tariffs and Trade in their treatment of food security.  The 'Arab' region (as described, i.e. here also including North Africa) is then explored in more detail in Chapter 6. In this region, "almost 90% of the land are classified as hyper arid, arid and semi-arid land zones (p.79)"; "90% of the region’s water is extracted for agriculture" (p.81) and "the per capita water availability is likely to be reduced by 50% by the year 2025 with water demand projected to increase by more than 60% by 2045" (p.80). With regards to energy and energy security, the situation is however quite different from one country to the other. A fascinating case study on Jordan is further explored. The political, governance, trade and subsidies issues are addressed at the end of the chapter, as crucial elements of the nexus debate. Chapter 7, entitled Recognizing the Water-Energy-Food Nexus: a renewed call for system thinking, actually focuses on North America and not only on system thinking (in which case it would have been better placed in the introductory section). This is an important chapter since the Great lakes region, which contains one fifth of the entire Earth’s freshwater, has undergone a sweeping industrialisation that led to the drainage of huge wetlands, massive ecological disturbance, and the loss of rich sediments. This chapter illustrates the problems that globalisation and monocropping generate on the balance of the water-food-energy nexus. It also shows how even in a (very) water-rich region, the quality of the water, altered by both the generation of electricity and the heavy reliance of intensive industrialised agriculture on chemicals and pesticides, can be a problem. The author points to the fact that "the forces that drive energy and agriculture are much bigger than the Great lakes region and will require engaging at national levels at a minimum". The US Farm Bill and energy markets are further addressed to show that the issue also has a transboundary/international relevance. Section II ends with Chapter 8 on sanitation in the context of the WEF nexus. Although its title does not mention it, the chapter actually discusses the concept of a 'productive sanitation' (aimed at finding various practical ways to harness synergies within the water-energy-food nexus) in various geographical - and even social and cultural - settings, as well as in urban and rural contexts. This very well structured as well as informative chapter also explains how opportunities might arise and how barriers to new practices can be overcome.

Section III on Water as a Human Right (two chapters) and Section IV on Water Security (three chapters) then follow, before a closing chapter (in Section V) focused on Water and Education.  Section III is an instructive and fascinating exploration of the development of a specific right to water throughout time - including a revisiting of the history of human rights, via the Stockholm conference in 1972 and Kofi Annan’s efforts, from 1997, to promote a universal understanding that "damage to the environment can impair and undermine all the human rights spoken of in the Universal declaration" (p.143). It goes on to argue that the legal enforcement of the right to water is critical and that "the optimal strategy is the explicit recognition of the right to water in national constitutions", (p.147) since "water’s necessity for human life and survival makes it a primary good and its relation to basic subsistence relates to the fulfilment of economic, social and cultural rights (ESCR)" (p.148).  The authors rightly remind us that the will to value and defend water rights was strongly  motivated by the economic and social problems that the privatization of water generated (p.133). The issue of water security, the measures taken to ensure it, as well as the challenges and threats it faces, are explored in this section. Since water security constitutes one of the main raison d’être of the WEF nexus, this discussion might have been better placed earlier in the book rather than at its end. The last chapter of the book focuses on water education in a specific place – Canada. Extending it to the rest of the world would have been both interesting, relevant and forward-looking, particularly since there is no overall conclusion to the book. Beside, one could easily assume that Canada is not the country where water education needs most reforming. Still, the thorough exploration of attitudes towards natural resources, as well as the suggestions to reform the curriculum, are both informative, constructive and highly useful in the context of the WEF nexus.

In the current context of the Covid-19 pandemic, finding ways to ensure water, food and energy security is becoming even more pressing. To that extent, the objectives of this book are particularly relevant. One hopes that the coming books in this series will complement this introductory volume by, for example, opening debates on 'post globalisation' economics, positioning the debate on the Nexus in the context of the transition towards circular economies, and reviving local know-how in natural resources management in various parts of the world.