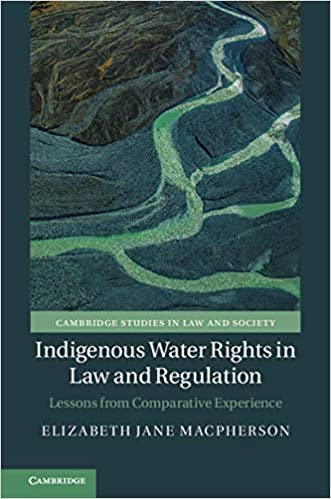 Indigenous groups all over the world experience marginalization and exclusion from water and other resources they depend on, even where their historical rights are formally recognized in constitutions and laws. Especially in former colonial countries, indigenous groups continue struggling against injustices embedded in legal restrictions and impediments, powerful existing claims, and forces of privatization and market ideology. Taking a legal perspective on indigenous water rights and injustices against indigenous groups, the author of this book explores the ongoing exclusion of indigenous people from water and the legal frameworks that determine how water is governed, managed and allocated.

Chapter 1 introduces the book’s ambition, "to understand what governments are doing, or may do, to provide for indigenous water rights" (p.9). According to Macpherson, two conditions for indigenous inclusion must be fulfilled: a jurisdiction for culturally appropriate water governance, management and control; and a substantive distribution "of the available consumptive pool of water to use for any purpose" (p.5). The book compares four countries: Australia, Chile, Colombia and New Zealand. Representing various legal traditions, histories of development, cultures and policy styles of dealing with water, these cases are well chosen. In 2017, the latter two countries attracted attention for dealing with indigenous water rights through experiments with legal personhood of rivers.

Chapter 2 explores the basis of claims for indigenous water rights, often justified by the special socio-cultural and spiritual relationships of indigenous groups with nature, expressed in distinct forms of water knowledge and rights. According to the author, there is a danger in this cultural framing: it 'pigeon-holes' indigenous water rights and uses in a way that excludes the right of indigenous groups to develop on their own terms, which may include claims to water for commercial purposes. Therefore, not only cultural water relationships but also indigenous water jurisdictions should be recognized. The author rightly argues that an exclusive focus on repairing culturally-framed historical injustices impairs attention for ongoing distributive injustices and, if needed, redistribution away from existing users.

In chapter 3, Macpherson discusses two major regulatory trends relevant for indigenous water rights: commoditization of nature and market mechanisms, and 'creative legal mechanisms' like legal personhood for rivers. Most western approaches tend to be anthropocentric, with nature as object exploited by humans. In contrast, ecocentric approaches place human-nature relationships on a more equal footing. A striking example of the latter are experiments with legal personhood of rivers in New Zealand and Colombia. The author rightly warns against naive optimism: while both cases are closely related to indigenous group rights, implementation of legal personhood is not necessarily in their interest. Legal personhood creates opportunities but the outcome strongly depends on the power relations between states and indigenous groups.

Chapter 4 discusses water rights struggles of the indigenous Australian population. After a history of systematic denial, some attention is finally given to indigenous water rights and cultural values. However, the 'native title' model restricts such rights to traditional non-commercial uses. Requirements of continuity (evidence of continuous use) and priority (claims should not interfere with existing uses) obstruct water justice for the aboriginal population. Serious distributive issues remain to be solved in a political-institutional environment unconducive to aboriginal claims. In water-scarce Australia, water use is highly competitive, under growing pressures and strongly market-regulated. According to Macpherson, stronger institutional mechanisms for (re-)allocation and redistribution are badly needed. With unbundling of land and water rights and the existence of markets, some basic requirements are met, but a move is needed beyond 'native title', with the political courage to prioritize indigenous rights to powerful industrial and agricultural interests.

Chapter 5 focuses on water rights of the Māori in New Zealand. Since the Treaty of Waitangi, concluded between settlers and Māori in 1840, the latter have been contesting exclusion from the natural environment. The Waitangi tribunal, established in 1975, aims at settlements involving the recognition of Māori values, restorative and distributive justice, and involvement in governing the environment. Major stumbling block is the fact that water resources are vested in the Crown. This has also influenced legal personhood for the Whanganui River, a compromise settlement between Crown and Maori. The author warns against overly optimistic conclusions about indigenous water rights: despite recognition of the cultural-spiritual ties between Māori and the river, issues of ownership and control have not been settled. Nationally, especially where pressures on water are high, substantive and commercial Māori water claims still have low priority.

Chapter 6 discusses the Atrato River in Colombia, another legal personhood case originating in action for the protection of constitutional rights on behalf of indigenous and afrodescendent communities. Although Colombia is not naturally water-scarce and water is treated as a state-governed public good, inequalities in water distribution are immense. Legal personhood became a solution to ongoing resource-related insecurities and injustices experienced by indigenous groups. It protects 'biocultural' rights of indigenous river communities, whose lives and livelihoods are closely connected with the river. However, substantive water (re-)allocations are absent from water law and governance frameworks. According to Macpherson, it is especially the normative power of legal personhood and the voice it gives to river communities that can make a difference in the future.

Chapter 7 introduces indigenous water rights in Chile, which were only recognized by law in 1993. Earlier steps towards recognition from the 1960s were brutally interrupted by the military coup of the Pinochet regime in 1973. The 1981 Water Code brought neoliberal reforms, privatization, and water markets, attracting foreign investments in water-related sectors like hydropower and mining. It led to large-scale water accumulation and marginalization of indigenous groups, who had no place in the law. After the dictatorship, new legal and policy instruments were created for recognition of indigenous water rights. However, the many restrictions on full recognition, such as requirements of continuity and priority, continue to hamper a more equitable distribution of water rights and access.

In Chapter 8 Macpherson discusses insights from these cases, three of which I will mention here. For one, all cases clearly illustrate that repairing historical injustices is important, but may also obstruct attention for current and future-oriented water rights and justice frameworks. Further, in all cases states are trying to recognize indigenous water rights, but they do so on their own terms by, for instance, setting limits to the degree of jurisdictional authority and control allowed to indigenous groups. Finally, although water market mechanisms can be part of solutions, they often become instruments of discrimination, marginalization and exclusion.

Macpherson has written a fascinating book, in the first place because of the case selection that forms its core. A major strength of the book is the nuanced view provided by comparison of the cases. Thus, for instance, 'unbundling' of land and water rights may be one step towards strengthening indigenous rights through reallocation and redistribution in one case, provided it is accompanied by strong protective measures (Australia), but part of a neoliberal agenda of a military dictatorship that further marginalizes and dispossesses indigenous groups in another (Chile). Market mechanisms may be needed in water-scarce settings and, to some extent, even provide opportunities for redistribution (Australia), but also introduce enormous risks of marginalization and exclusion of those who are most in need (also Australia, and primarily Chile). The absence of market approaches, however, does not guarantee easier access and stronger rights (e.g. New Zealand). Recognition of indigenous rights is a necessary step in all countries, but can coincide with an ongoing denial of substantive water rights (e.g. New Zealand, Colombia).

The research, on which the book is based, seems a bit biased in one important respect: because the book focuses on inclusion of indigenous water rights in state legal frameworks and policies, the author has mainly interviewed state representatives and experts. A more balanced selection of research participants would have been an added value here; representatives of indigenous groups may have different opinions on 'inclusion' and 'recognition' by the state than representatives of the latter. While the author seems to take the idea of state 'provision of water rights' for granted as point of departure, her cases are evidence of fierce and ongoing struggles for rights. This harsh reality could have been given more stress. In contexts of legal plurality, the power relations between states and indigenous groups often determine what is recognized on whose terms. A more in-depth discussion of these most contested dimensions of recognition and inclusion would have further enriched this excellent book.