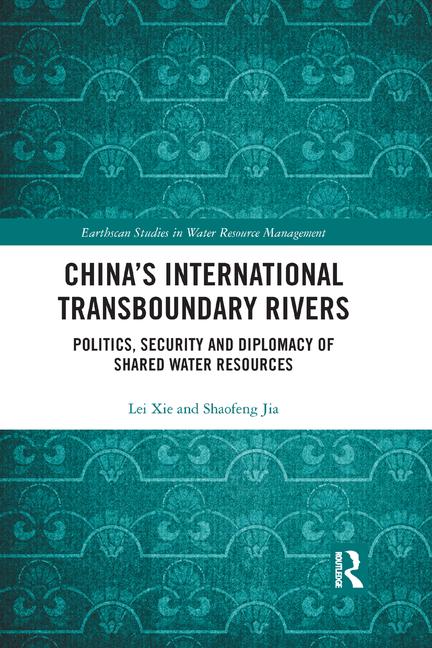 China has 40 major transboundary rivers. In almost all cases, it is the upper riparian state, which gives it a distinct advantage in the exploitation of water resources. In theory, China has little incentive to comply with international water norms or to become strongly engaged in binding transboundary water treaties. There is considerable anxiety over China’s potential to overuse water resources. Brahma Chellaney (2011), in a realist theoretical framework, for instance sees conflict over water on the horizon. China itself, with its vague and ambivalent dedication to international water norms, has done much to unsettle neighbouring riparian states with regards to water security.

Lei Xie and Jia Shaofeng provide a nuanced perspective on China’s international water diplomacy. They highlight the salience of domestic factors, as well as the prevalent technocratic-instrumentalist stance taken by the Chinese leadership towards water management. Economic rationalities – irrigation, urban water use, industry and hydropower – have been prevalent, and ecological aspects begin only slowly to gain weight. The whole second chapter deals with the complex, often contradictory institutional setup of water governance within China. Chapter three summarizes the extent of China’s water diplomacy, its principles and practices.

The fourth chapter outlines the theoretical approach to issues of water diplomacy. To my mind, this is a bit late in the book. Also, it does not become very clear how the authors position themselves in terms of international relations theory, or what motivates their review of different explanations to water diplomacy. It would have been preferable for the authors to make their theoretical stance more explicit at an early stage.

The theoretical part is followed by four extensive case study chapters, one each on the Mekong River, the Ganges-Brahmaputra-Meghna (GBM), on Central Asian watersheds and on the Amur River.

The Mekong River provides an example of China’s perception as an upstream hegemon, in this case by the lower Mekong countries. China’s strategic interests lie mainly in hydropower exploitation through dam construction, as well as in ensuring navigation of the river to foster international trade. On the other hand, China has engaged in a number of diplomatic initiatives to allow trust building with the lower riparian states, including consultation, information sharing, disaster control, and biodiversity protection. The latest of such initiatives is the Lancang-Mekong Cooperation Mechanism (LMCM), a 2015 agreement of China with its South-East Asian neighbours. Despite China’s relatively pro-active and conciliatory role on the Mekong, Xie and Jia (p.107-108) identify a number of challenges connected to the fragility and asymmetry of Mekong basin international relations.

The situation on the Ganges, Brahmaputra and Meghna (GBN) rivers is altogether different; instead of goodwill and tightening integration, the hydropolitics along these rivers are shaped by the stark geopolitical competition between the region’s two great powers: India and China (see Chapman 2009: 278-281). While the smaller states – Nepal, Bangladesh and Bhutan – are equally impacted by water insecurity, they are mere bystanders in frequent disputes and standoffs between the two rival nations. Water resources are both an urgent security concern and a politicized terrain, as Xie and Jia rightly note (p. 116-125). Contentious issues like territorial disputes and Tibetan autonomy, converging with lack of water security, make the prospect of joint water management initiatives between India and China highly unlikely.

China’s relation to Kazakhstan has generally intensified greatly since the former Soviet republic became independent, not the least in the scope of China’s One Belt One Road (“New Silk Road”) infrastructure initiative, to which Kazakhstan is a partner. Disagreement over shared transboundary rivers has become a liability between the two countries, as China seeks to utilize water resources for the development of its western Xinjiang region. Since Kazakhstan is the downstream country, its water security is potentially compromised by China’s water exploitation practices. In the face of this hydropolitical positioning, the two countries have engaged in a number of trust-building diplomatic initiatives, which Xie and Jia view as overall positive, with some reservations (p. 154-156).

The Amur river is the largest transboundary river shared between Russia, Mongolia and China. Here, water diplomacy between the Russian Federation and the People’s Republic of China is marked by stability, reflected by the large number of bilateral agreement; in comparison, this is a success story. Yet given the historically diverging interests of both countries, the authors retain a degree of scepticism on the solidity of water cooperation in the Amur river basin (p.176-178).

The case studies reconfirm the complexity and ambiguity of China’s approaches to water diplomacy. Water management institutions vary in their degree of formal institutionalization between very high (with the Mekong countries) and low (with India) (p. 188). The authors conclude that China has displayed acquiescence to international water norms in some regards, but its approach to water diplomacy is dominated by realist thinking and the demands created by its economic development (p.201-202).

Xie and Jia have presented an empirically rich, comprehensive account of Chinese water diplomacy. However, at times, the text lacks clarity – theoretical positions drown in factual information. Other than that, Xie and Jia have assorted an extremely useful resource that helps us understand the important topic of Asian water security.