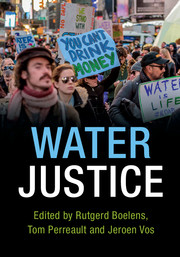 Justice is a complicated term to parse for fresh water, which is socio-politically, culturally, geographically, and hydrologically variable. This edited volume schematises approaches to water in/security and water justice, while also aggregating context-based and theoretically nuanced interpretations from a range of scholarly disciplines. A formidable display of theoretical nuance amidst practical contexts, it is an essential volume for scholars of waters’ sociality, materiality, and political-economic valences.

The volume’s Introduction notes the background problematic of how a "state-centric water rights model is fused with a market-focused neoliberal paradigm" (p.15), and indicates that "what is common to all our authors is that they expressly engage and identify with those groups in society that have the least rights and power over water access and decision-making. They all aim to support their water security struggles" (p.23). This conceptual placement and explicit willingness to recognise the non-neutrality of scholarship – indeed, explicitly to claim a normative orientation – is noteworthy. It also reflects a discursive-analytical trajectory in the water studies literature that is lsceptical of the totalising, universalising claims of modernist and market-based governance and distribution models, as described by the editors as well as by Gerlak and Ingram’s chapter in this volume (see also Schmidt, 2017; Schmidt and Peppard, 2014).

Recognising the dominance of the logic of water as resource and commodity, the editors’ introduction links early (and ongoing) critiques of systemic distributive inequities with more recent theorisations of water in/justices as involving "both quantities and qualities of water, the modes of accessing and distributing water, and the meanings, discourses, truths and knowledge that shape water control". They note that varieties of water property arrangements and governance ideals too often effectively dismantle the presence of "inconvenient otherness" through de jure appeals to rational planning and "equalization" (often including languages of pluralism, multiculturalism and participation) while de facto, "'making water use and rights rational' has become a missionary process of supplanting relationships of community, local property, knowledge and ethics, often in combination with large-scale water transfer and grabbing practices" (p.14). The chapter on water grabbing by Veldwisch, Franco, and Mehta further illuminates these claims.

The editors rightly note that "attention to water rights’ cultural embeddedness, plurality and complexity require a shift of focus, away from exclusive attention to formal structures and regulations towards an interest in how and by whom water rights and governance forms are produced, reproduced, and transformed in particular ecological and cultural settings" (p.21). This includes treating decentralised and informal water exchanges – not just formal policy agreements or centralised infrastructure services – as consequential sites of negotiation, access, and justice (see Wutich et al., 2018).

The 18 chapters of the book (beyond the editors’ general introduction and conclusion) are clustered into four parts, each of which has its own section introduction by the editors: I – Repoliticising Water Allocation; II – Hydrosocial Depatterning and Composition; III – Exclusion and Struggles for Co-Decision; IV – Governmentality, Discourses, and Struggles over Imaginaries and Water Knowledge. Of course, these categories are not mutually exclusive, and authors’ approaches integrate various themes that resonate with prior parts while displaying a range of methodologies.

Many chapters in the volume could be highlighted. In what follows, therefore, I highlight several thematic clusters while flagging chapters and authors that raise important observations and questions, at least from my perspective as a scholar of water ethics who lives in the global North. Readers more versed in other forms of analysis – and those who are differently situated in terms of geography, social milieu, and polity – will undoubtedly identify other important nexus questions as well; please feel free to identify and expand upon those in the accompanying forum.

Sanitation is inextricable from questions of justice and access to potable water, and the several essays in this volume depict those intersections. Crow’s essay in Part I on 'Urban water and sanitation injustice' pairs nicely with 'Sanitation Justice?' by Rusca, Alda-Vidal, and Kooy in Part II, which schematises three dimensions of justice in light of sanitation and gender realities, as reported by residents of several sub-Saharan cities. The authors find, for example, that framings of "decentralized sanitation options as participatory has shifted sanitation [to a realm that is] individualized and commercialized, which has negative impacts on distributional justice" and argue that "the simultaneously public and private nature of sanitation requires rescaling arenas for participation" (p. 218). They also conclude that "development initiatives under the SDGs should therefore aspire to 'just' sanitation, rather than 'improved' or adequate sanitation" (p. 221).

In a slightly different inflection, the essay by Bossenbroek and Zwarteveen in Part IV importantly interprets interconnections among the constructions of gender, economic pressures, and the experiences of environmental change in ways that explore "the intimate relationship between gendered norms/practices and groundwater dynamics" in Morocco (p. 335). Somewhat similarly, the essay by Roth, Zwarteveen, Joy, and Kulkarni also touches on water distribution linked to caste and gender. These four essays, read together, usefully depict and interrogate the equity issues endemic to sanitation, gender, and domestic and peri-domestic realities beyond centralised or formalised infrastructure services.

The notion of the Anthropocene is approached with a light touch in this volume. Johnston mentions it briefly in Part I, suggesting that "large-scale hydro-development can be considered one of the major driving forces in this Anthropocene age: achieving short-lived gains at the cost of biocultural diversity and planetary life" (p.170). In Part III, Gupta’s essay, 'Sharing our water: Inclusive development and glocal water justice in the Anthropocene', argues that "the Anthropocene requires humans to recognize the limits of 'water ecospace' or water availability" in an era of post-stationarity (p. 260).

However, these essays lack critical engagement with the presumptions and inherent biases of the term 'Anthropocene' itself. Alluring and expressively concise though the term may be, the term Anthropocene has been rightly critiqued as a concept that problematically naturalises climate change into a 'species-wide phenomenon', when in fact causal responsibility rests primarily with specific groups that instigated and have disproportionately benefited from fossil fuel economies (Malm and Hornborg, 2014). More critical engagement with such conceptual vagaries of the Anthropocene is needed in a volume expressly focused on water justice (see Zenner 2018, chapter 6) – especially in light of the editors’ apt awareness of the dangers of universalising modernist notions, as well as their commitments to the ways that moral imaginaries shape concepts of justice, as discussed in Part IV.

Discourse analysis as a mode of justice-theorising

Who defines what counts as a problem surrounding water, or the knowledge and experience that qualify for addressing it? Several essayists, including Nadia Joe (Gugula), K.J. Joy, and Seema Kulkarni come to the volume from place- and activism-based sociologies of knowledge. The essay by Bakker et al. is a nuanced, rigorous example of wrestling with 'regulatory injustice' in Canada’s ongoing negotiations with First Nations. Those essays, in particular, raise important (if also implicit) questions of how place-based immersion and accountability to communities can alter the presumed authority structures of modernist, university-based water discourses – as well as the more frequent question in the water governance literature regarding 'exclusion and struggles for co-decision'. In that light, a productive volume to pair with this one is the multifaceted Downstream: Reimaging Water, edited by Christian and Wong (2017).

These inquiries are part of what Gerlak and Ingram term 'the discursive paradigm'. In their chapter on 'De-Politicized Policy Analysis'', the authors lay out the significance of discursive approaches, which "all address language and argumentation, and reject the rational positivist approach to policy analysis (… ) [and] challenge the artificial boundaries between humans and nature, revealing multiple meanings, values and knowledges of water", and offer an evaluation of how policy analyses "affect which water problems reach the agenda and how issues are framed" (p. 83).

Questions of procedure, framing, and the content of justice swirl productively throughout this volume. Fresh water as a human right has been among the most prominent theoretical structures of the past few decades. Varieties of water rights are addressed in many chapters, as is the human right to water and sanitation. Several chapters expand languages of justice and rights to engage 'ecospace' or notions of 'socioecological integrity'. Yet there is a lack of discussion on the rights of water: that is, whether waters themselves have a right to exist and be the subject-object of justice. Admittedly, such questions may seem overly abstract or unhelpfully philosophical to some readers. After all, as human beings, our conceptualisations and actions regarding fresh water can hardly escape the confines of perspectival anthropocentrism. Nonetheless, a range of non-anthropocentric (perhaps positively hydro-centric) moral orientations are advocated as customary values that should guide governance decisions (see, for example, the 2010 Declaration of the Rights of Mother Earth). These questions about the capaciousness of justice are no longer pragmatically peripheral.

Relatedly, I was drawn to Part IV’s explicit willingness to explore 'ideas, imaginaries, values, norms'. The viability of robust value-pluralisms for understanding and governing water is a prime topic at present. In 2018, the UN High Level Panel on Water’s report document, Value Water, explicitly noted the importance of cultural formulations of waters’ values. And in recent years, there have been unprecedented legal affirmations of Indigenous peoples’ claims to both legal and metaphysical/ontological sovereignty over rivers and other bodies of water in erstwhile (neo)colonial political economies, including but not limited to the Whanganui in Aotearoa/New Zealand.

Unfortunately, with the exception of the editors’ section introduction, this part of the volume omits treatment the potent moral-ecological imaginaries recently and publicly foregrounded at Standing Rock (Turtle Island/US) or the Whanganui River (Aotearoa/New Zealand). This is a missed opportunity, since these cases have gained worldwide attention, and seem to be prime examples of the desired orientation of this part of the volume. Granted, how customary management frameworks impact marginalised populations’ access to clean, fresh water (and sanitation) often remains to be seen. But the potency of cultural narrative, social practice, and collective memory is very real when it comes to water. In this regard, particularly thought-provoking for me was Perrault’s treatment of memory and counter-memory – specifically idealised nostalgia for lost places – as a ground for "collective political action and claims for making environmental justice" (p. 317).

In their conclusion to the volume, the editors note that the intersections of environmental justice and political ecology "provide inspiration as well as a conceptual foundation for our understanding of water justice" (p. 346). They also situate their approach within an admixture of theories of justice (Rawls; Fraser; Sen and Nussbaum; Young) and identify four ways that water can be a site of struggle: materially; in terms of laws and norms; in terms of governance authority; and in terms of symbolic meanings. After recapitulating themes from the volume, the editors conclude that "water justice questions are questions of social relations that enable or constrain people’s abilities to attain the water they need and their ability to organize for and decide over water control". They advocate "for a view of water justice that is integrative, relational and multiscalar, and which emphasizes water justice as a means of achieving social wellbeing" (p. 356).

Water Justice is a multi-disciplinary sampling of approaches that eruditely frames scholarly developments and makes a useful, lasting compendium for theories and practices of water justice for students, researchers, and professionals alike.