Water, energy, food and people across the Global South: The ‘nexus’ in an era of climate change (Swatuk and Cash, 2018) 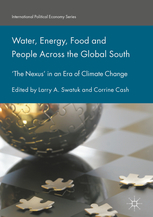 To cite this Review: Zerrenner, K. 2020. Review of "Water, energy, food and people across the Global South: The ‘Nexus’ in an era of climate change. Palgrave Macmillan, 2019, edited by L.A. Swatuk and C. Cash, Water Alternatives, http://www.water-alternatives.org/index.php/boh/item/147-nexus2

Nexus thinking, like interdisciplinary studies, has become popular in the past couple of decades. The nexus between energy and water was the first to gain prominence, with food/land and people more recent additions. The focus has also tended to highlight case studies in developed countries, like the US and UK in particular, with a more recent trend towards looking at projects and policies in China. This book takes a welcome approach to looking at case studies in countries of the Global South, from Africa to South America to India and beyond, covering 13 chapters with 28 contributors.

The first chapter is a helpful set up for what the nexus is, as well as showing the pitfalls of nexus thinking. Namely, the nexus helps tackle the big picture issues, but high-level thinking can potentially distract local leaders from the problems on the ground. Further, relying on framing things through a climate change narrative can disempower local actors in favor of national or international ones.

The second chapter, focusing on the Arab World, and Jordan in particular, explains how the nexus impacts that particular region. The chapter focuses on a region that is not usually part of the discussion, but should be given more attention notably because of its dependence on oil and lack of water, on top of fragmented institutions to address nexus issues. This chapter also raises the important point that if we plan our policies without considering or understanding the nexus, each resource looks like a player in a zero-sum game.

The following chapters, while covering important topics in water and ecosystem management, do not really address nexus issues. These chapters include a lot of important research on areas such as urban environmental management in Ghana and water through a gender lens, but the chapters are lost here.

The book seems to be unclear regarding who its audience is. A reader looking for nexus topics is likely to get frustrated at the heavy emphasis on water and ecosystems while someone looking for water management case studies may not think to read it considering the title. Energy is almost entirely missing from the case studies.

This book should really be two different books: one focused on the energy-water-food-people nexus issues that would include the first two chapters and the conclusion, from a local to national to regional focus on the Global South and another with the other chapters focused on environmental management, with an emphasis on water.

Part of the need for more discussions on the nexus is to better integrate topics to find the interconnections and efficiencies. As is often the case, however, the discussion in most chapters of the book tends to emphasize one of the nexus topics over the other, thus losing stakeholders who could contribute to nexus solutions. Unfortunately, this is what happens in policy discussions in the real world as well, whereby interconnections are missed and topics continuously considered in silos. Water experts talk about the nexus and energy experts talk about the nexus, but they do not talk to each other often enough. This book feels like a missed opportunity to bring these issues together in the context of the Global South. Every chapter in this book has valuable data and research, but most seem to be in the wrong book.