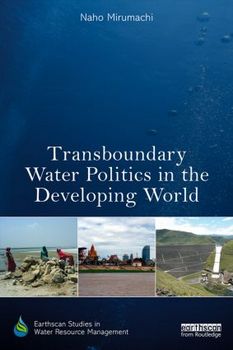 Every now and then the next international water war is predicted, but it never materialises. This, however, does not mean that all is moonlight and roses. 'No war, no peace' is a pretty common state of affairs on transboundary rivers in the global South. There is no inevitable trajectory from violent conflict to peaceful cooperation.

Naho Mirumachi, a founder member of the London Water Research Group and lecturer at King's College in London, rose to prominence in the late 2000s with a bright idea: conflict and coordination are not a continuum, but may alternate or even coincide. This deceptively simple brainwave gainsays current preoccupations with transboundary basin cooperation, climate fuelled or otherwise, which may be economically rational, but politically far less straightforward.

The volume's first chapter is entitled 'How water becomes political'. But while this book joins the expanding ranks of those who oppose depoliticised, functionalist analysis, it stops short of a critical political-ecology approach. The author shares concerns of inequity, asymmetry and lack of access, and opts for the construction of a more eclectic, multidisciplinary framework led by good old International Relations, in which she majored. Agreeing that water resource management is politics-imbued, she emphasises that it is also ´wicked´ due both to disagreement about facts (scientific unknowns), and incompatible values held by stakeholders. Transboundary water resources development, Mirumachi notes, tends to be treated as a well-structured problem where the values are agreed on, and it is only the facts that are considered unclear. This mismatch points at the social constructedness of water problems. Political reality is complex, and needs unpacking before we can arrive at black and white conclusions.

This also goes for the politics. Shared waters are clearly imbued with politics, but not necessarily politicised. Naho Mirumachi's book does not claim a priori that water is political, but looks into the discursive process that makes water political and conflictive. This forms the basis of Naho's Transboundary Water Interaction NexuS (TWINS) model, explained and somewhat expanded in this slim book (notably in Chapter 3) with the help of three well-known river basin case studies: the Ganges in South Asia, the Orange-Senqu in southern Africa, and the Mekong in Southeast Asia. Each of those cases has seen its share of conflict and cooperation in the course of time. Hydropower projects often prove to be flashpoints: in the Ganges basin the analysis mainly focuses on India's Tanakpur Barrage; in the Mekong it is the Xayaburi Dam in Lao PDR; and in the Orange to focus is on the Lesotho Highlands Project. All are lucidly analysed.

The TWINS takes a social constructivist approach to conflict and cooperation: while the x-axis of the TWINS model charts increasing degrees of transboundary integration, the vertical axis runs through a crescendo of speech acts, from politicisation to 'violisation' – Iver Neumann's addition to Buzan et al.ʼs (1998) constructivist security model. In Buzan et al.ʼs original conception, an utterance, spoken in the right context by an authoritative speaker and resonating with the right audience, can create a social fact, such as a marriage, a promise, a threat. (I note that Mirumachi's analysis does not extend to declarations of war, as in 'violisation' – though South Africa's invasion of Lesotho would be an obvious candidate – or, at the other extreme on the x axis, regional integration).

Politics, security, and violence as speech acts are a core aspect of TWINS that few 'London school' adherents have fully integrated into their work, perhaps because it had not been theorised very deeply so far. Mirumachi partly fills this gap by providing a typology of declarative and commissive speech acts. While it has been successfully argued since then that non-elite actors can also make successful security speech acts, the analysis in this book sticks to elite speakers. To avoid an overly state-centric approach, however, Naho Miromachi resorts to politicians and 'the hydrocracy' as water security speakers – a concept featured prominently in a Special Issue in Water Alternatives in October 2009. Its use creates a neat conceptual division between the elite and the people – local dwellers, women. Hydrocratic elites in both hegemonic and nonhegemonic river riparian zones may agree on the purpose of development, while ignoring other views. In each of the case studies analysed in this book, the hydraulic bureaucracy is certainly a dominant player, in thrall to the 'hydraulic mission' of water development. It is however not so clear from the analysis in this book who these 'hydrocracies' are, and if they really are such homogeneous entities set apart from society.

That said, the TWINS model is very helpful in illustrating the way in which transboundary cooperation may look good on paper, but is actually shallow and remains politicised. The language of benefit-sharing and equality can obscure active stalling, as evident in the cases at hand. Non-hegemons will consent to such 'cooperation' for lack of a viable alternative, making the scene look cooperative. Mirumachi's well-written book dares us to look beyond the smooth surface and make sense of the messiness and, at times, ugliness below.