Before the flood: The Itaipu Dam and the visibility of rural Brazil (Blanc, 2019) 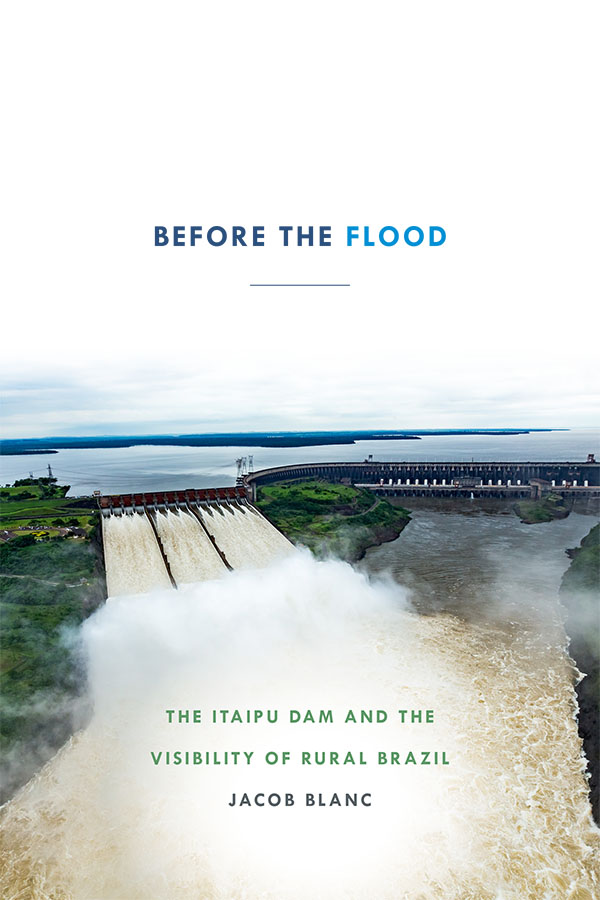 To cite this Review: Atkins, E. 2020. Review of "Before the flood: The Itaipu Dam and the visibility of rural Brazil", Duke University Press, 2019, by Jacob Blanc, Water Alternatives, http://www.water-alternatives.org/index.php/boh/item/157-itaipu

Built on the Paraná River at the border of Brazil and Paraguay, the Itaipu Dam is a monument to the high modernist dreams of the military dictatorships that ruled the respective states at the time of its construction. The vision was simple (and familiar), with the project generating hydroelectricity to galvanise national economic growth. Built by Itaipu Binacional (a joint Brazilian-Paraguayan venture), Itaipu now fulfils 15% of Brazil’s and 90% of Paraguay’s respective national energy demand (Itaipu Binacional, n.d.). Yet, whilst the project might represent a monument to military rule, it was also completed during its decline in the two countries. Within seven years of the dam’s completion, both Brazil and Paraguay had transitioned to democracy.

Whilst the complex entanglement of Itaipu with geopolitical tensions, military juntas and energy security has been explored by scholars such as a Christine Folch (2019, reviewed in Water Alternative by Pierre-Louis Mayaux), Before the Flood offers a different perspective – relocating the construction of Itaipu as a key site in Brazil’s Abertura (a period of liberalisation and reform between 1979 and 1985). To do so, Jacob Blanc works to illuminate the experience of the farmers, landless communities and the Avá-Guarani indigenous community that opposed Itaipu’s construction. Similarly to how rapid industrialisation in urban areas had to the mobilisation of workers, the construction of Itaipu created the conditions of a particularly-rural form of opposition in Brazil.

To uncover this distinctly-rural form of resistance to hydropower in Brazil, Blanc refocuses our attention. Rather than conceptualising the Itaipu project as the blockading of water alone, this text illuminates how the opposition to the dam was primarily focused on land. With access to land a key part of dictating legitimacy and authority in rural Brazil, Itaipu was not only a threat to such claims but also became an arena in which to assert specific relationships to land in the region. To explore this, Blanc’s research is exhaustive – engaging with over 30 archives in Brazil (including the previously-closed archive of Itaipu Binacional itself) and conducting 45 interviews with politicians, military personnel and activists.

The text itself is divided into seven empirical chapters (plus an Introduction and Conclusion) that perform two functions. The first three chapters provide a lateral history of the project, from the 1950s to 1984, when Itaipu’s generation of energy began. The history of the project finds roots in a long geopolitical stand-off between Brazil and Paraguay over the Paraná basin that constituted the borderlands between them (see Chapter 1). In essence, the 1973 Treaty of Itaipu addressed these tensions by flooding parts of the disputed area to generate hydropower that was to be shared between the two riparians. Yet, in doing so, it helped rewrite the geopolitical status quo in the region – with Brazil becoming a dominant regional power and Paraguay signing into an unequal agreement that created a grievance that continues to this day (Elder, 2019).

The political legitimacy of Itaipu was a central desire of the military junta, intent on justifying the project as key to national economic development. Yet, the entry of the project into the region resulted in the formation of a local network of opposition – in the Movimento Justiça e Terra (Justice and Land Movement, MJT) – that attracted widespread support and media exposure and shifted public opinion against the project, becoming an important site in Brazil’s pro-democracy movement (see Chapter 2). However, a central argument of Before the Flood is that the MJT did not speak for everyone impacted by Itaipu (see Chapter 3). The MJT centred its opposition on protecting those farmers who held formalised land tenure. Both the landless communities and indigenous groups in the region, who held different rights, visions and epistemologies of land and land-ownership, were overlooked – and forgotten – in this coalition. The MJT, instead, was focused on the securing of improved compensation for the landowning farmers displaced by the project, who were primarily white and of European descent.

The final four chapters of the project historicise the struggle against Itaipu – locating the project within wider patterns of violence, exclusion and change that had existed before the project arrived in the region. In doing so, and somewhat confusingly considering the text is titled Before the Flood, Blanc both reflects upon and challenges the linearity of historical chronologies of dam-construction by illuminating how Itaipu does not exclusively represent a fixed moment in time but is, instead, a segment in a more complex, overlapping temporality of rural and agrarian movements in Brazil.

These final four chapters tell stories of those displaced and impacted by Itaipu to highlight how its construction represented more than the pouring of concrete but also represented a pivotal moment in the role of rural and agrarian communities in Brazil. For Blanc, this can be seen in how the Avá-Guarani community challenged and reconfigured dominant definitions and usage of the term 'indigenous' as well as what it means to be 'impacted' by a hydroelectric dam (Chapter 4). It can be seen in the story of Juvêncio Mazzarollo, a journalist imprisoned by authorities who became a symbol of the wider struggle against the junta and for democracy in Brazil (Chapter 5). Or in how Itaipu came to be a "central arc in the territorialisation of Brazil" (p.175), with those communities displaced functioning as a vanguard of agricultural expansion in different spaces (such as the Paraguayan side of the border or in the north-east and Amazon regions of Brazil (Chapter 6).

Yet, for this reader, the most notable story that Blanc tells is how the exclusion of landless communities from the MJT (and the concessions it secured) laid the foundations of a central social movement in post-democratisation Brazil (Chapter 7). In response to a lack of compensation, support or redress for their displacement, a new landless movement emerged in the wake of Itaipu – the Movimento dos Agricultores Sem Terra de Oeste do Paraná (Movement of Landless Farmers of Western Paraná, MASTRO). Asserting a vision of land as a collective right, MASTRO quickly gained over 10,000 members and went on to play a key role in the formation of the Movimento dos Trabalhadores Rurais Sem Terra (Landless Workers Movement, MST) (Chapter 7). In a remarkable period of three years, "members of MASTRO went from almost being an afterthought in the fight at Itaipu to being key contributors in the creation of Brazil’s largest social movement" (p.224-225).

If there is one point of criticism of Before the Flood it is that it rarely extends it analysis beyond the Brazilian borderlands of the Paraná basin and into the experience of those living in Paraguay. Itaipu is a bi-national project and, as a result, is intricately tied to the national politics of both Brazil and Paraguay. The project brought thousands of migrants to the Paraguayan side of the border. The contests over land between these communities and Brazilian migrants later provided a central driver for subsequent land occupations and the organisation of Campesino resistance in the region (Nagel, 1999: 154-156). However, there is limited exploration of the Paraguayan experience beyond the discussion of geopolitics in Chapter 1. Whilst Blanc does draw attention to the reception experienced by Brazilian migrants to the Paraguayan agricultural borderlands (p.176-181), there is more to be said of how the experience of Brazilians (both landed and landless) overlapped with the experience of similar communities over the border.

Despite this limitation, Before the Flood offers a comprehensive and convincing analysis of how the Itaipu Dam became more than a monument to high modernism – it was a key site and symbol of the emergence of rural communities in Brazil’s Abertura. Whilst the movement did not necessarily win (the project was built and the land flooded), it showed the potential of counter-hegemonic struggle of rural Brazil and provided a foundation for subsequent social movements. Blanc reflects on this importance but also provides a fascinating dissection of the links between hydropower, livelihoods and patterns of difference and exclusion within anti-dam networks. In doing so, Before the Flood renders visible how the construction of dam projects – and their contestation – is never linear in temporal terms. Instead, a dam represents a moment – a rupture – in historical patterns of land, livelihoods and difference.

Nagel, B.Y. 1999. "Unleashing the fury": The cultural discourse of rural violence and land rights in Paraguay. Comparative Studies in Society and History, 41(1): 148-181.