Whose water is it, anyway? Taking water protection into public hands (Barlow, 2019) 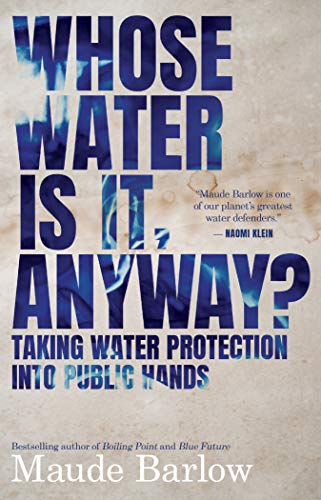 Maude Barlow’s 'Whose Water Is It, Anyway?' is another addition to her earlier works on activism and global water crises.[1] This book is similar to her earlier works, including the 'Blue Trilogy'. The theme of the book revolves around the 'Blue Communities' e.g. municipalities and civil society organizations committed to water protection and that were first created in the context of the Blue Planet Project (BPP) launched by Maude Barlow and her team at the Council of Canadians. The book has five short chapters, which can be broadly divided into two sections. The first section, made of the first two chapters, is on why resistance to water privatization grew, and the second section made of the three final chapters is about where and how the resistance expanded.

In her first chapter, the author unequivocally calls out what she names a "corporate cartel" and argues it is responsible for rising prices of drinking water, the commodification of water, and plastic water consumption. She quickly recaps the history of water privatization. In her search for answer to "who owns water and who is making decisions about the precious resource?" (p. 16), Barlow establishes that privatizing of water was envisioned as a "new frontier(s) of economic globalization" (p. 17) and she argues that organizations like the World Bank, the World Water Council and some United Nations organizations partnered with corporation and supported the process of water privatization. Barlow introduces lay readers to free trade deals and argues that they are mostly favoring private corporations, which she sometimes refer to as "polluters". She explores the numerous ways in which corporate sector’s control of water has altered the natural functioning of the water cycle by over-extracting, mistreating and polluting water. The chapter includes a section dedicated to the negative effects of private bottling plants with examples from developed as well as developing countries where  Nestle, Vittel, Coca-Cola, Fiji, Suez, or Veolia operation have resulted in filling lands and waters with plastics.  The chapter concludes by pointing out that commodification of water is now "beyond reach of untold millions"" (p. 42).

The second chapter is the story of a growing resistance to the "corporate cartel" notably catalyzed in the context of the 'Blue Planet Project'. Maude Barlow’s documents her commendable journey to expand the coalition and network by notably identifying 'water warriors' having similar ideas and then providing them an opportunity to attend Global Forums where the 'lords of water' sit for decision making on water. The author calls it "Crashing their parties" (p.44), whereby first, the 'water warriors' are informally invited but use this opportunity to gain influence and extend their network, in turn, finding likeminded grassroots people to support their cause. This chapter is also about the struggle that led to the United Nations General Assembly resolution recognizing the "Human Right to Water and Sanitation as essential for the full enjoyment of the right to life" (p. 54). Barlow talks of her journey as a water activist and of her understanding of water over the decades, and supports her case with a series of powerful examples from various countries. She presents anecdotal short example of the struggle, which leave the reader hooked but also intrigued as these are accounts that remain mostly unsupported by academic or other’s work and sources.

Chapter three is an account of how the Blue Communities project by the Council of Canadians spread its roots in Canada. Barlow links water quality degradation to extinction of insect species due to pesticides and chemicals. Discussion of Canadians complacency towards their inadequate water protection laws, Trudeau government’s broken promises (p.72), and Public-Private Partnership for water management are the highlights of this chapter. In Canada, Maude Barlow’s fight against privatization started with stalling Nestlé's groundwater extraction in Ontario. Local activists collaborated with municipalities and faith-based organizations and established what they called a 'Blue Community' and pledged for "protecting and promoting water and sanitation as human right, promising to protect water as a public trust by promoting publicly financed, owned and operated water and wastewater services, ban or phasing out the sale of bottled water in municipal facilities and at municipal events and promotes its tap water as a reliable and safe source of drinking water". (p. 11-12). The author briefly mentions rural communities that are not served by centralized piped water systems and how and why they do not fall under the purview of classic Public-Private-Partnerships but the nuances of the rural-urban divide are a critical juncture for water resource management that the author does not address in detail.

In chapter four, similar struggles and cases in European countries are discussed. Other than that, Maude Barlow highlights the role that the World Council of Churches played in strengthening the coalition calling for the need to consider water as public trust when it joined the Blue Community movement. While the movement is described in detail given the insider nature of Maud Barlow, there is very little information about the broader issue of water education and awareness, which could have been investigated further. The major drivers and processes through which this movement inspired local activists and their stories could also have been further described.

The final chapter is about the places where the movement further spread – beyond Canada. Barlow briefly talks about water resource policies in the Unites States and Brazil, and why there is a pressing need to establish more Blue Communities. She mentions important issues such as environmental racism and the status of vulnerable and marginalized communities. She argues that private sector investment will lead to continued divisions based on race and class. Barlow also calls out the right-wing patriarchy, stating it supports the exploitation of natural resources for private benefits. In the afterword 'Dreaming a Great Dream', the book does leave us with a hopeful assurance. Barlow dreams of water justice and "reclaiming cities from excesses of neo-liberal capitalism" (p. 134) and call for decentralized solutions shaped from the grassroots. How much of this call will affect worldwide grassroots struggles around water and equality remains to be seen.

While the book is about the global water crisis and puts forth the argument that solutions are bottom-up in nature, local problems and local stewardship in water protection are not really described in details. This might be due to the limited source material used, which mostly comes from the Author’s own experience with a few well-known organizations. How far can these struggles go, and how effective their reach will be, is an estimation which begs question. Overall, this is an interesting read that can influence a large reader base to re-think water activism.

[1] Maude Barlow is a Canadian author and activist. She is the founding member of the Council of Canadians and the co-founder of the Blue Planet Project. She also chairs the board of the Washington-based network of advocacy organisations Food and Water Watch. She served as a senior advisor to the 63rd President of the UN General Assembly and led the campaign for the recognition of water as a human right.