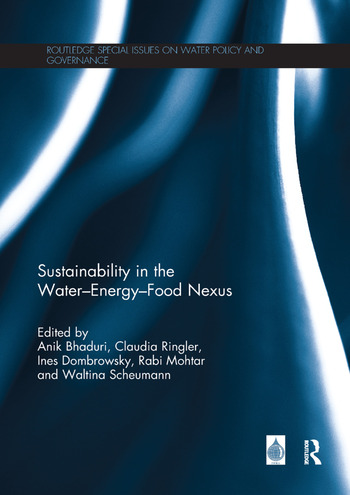 This volume adds to the growing literature on the water-energy-food (WEF) nexus with chapters that address cases ranging from North and South Americas, Europe, Central Asia, Middle East and South Asia. Its twelve chapters are divided into two groups to address two key questions: six chapters focus on tools that help nexus implementation at different scales, and six discuss challenges of nexus governance in dealing with trade-offs and synergies. A Routledge special issues series on water policy and governance in collaboration with the International Water Resources Association (IWRA), its chapters were originally published in the journal Water International volume 40, issues 5-6 (September-October 2015). The chapters were also presented at the 2014 Bonn Conference on Sustainability in the Water-Energy-Food Nexus, and the editors in their introductory chapter summarize three main messages brought out by that Conference's "call to action". The ethos behind the appeal is also reflected in various ways in all the chapters in this book.

The first is that responsible sector governance is a first step in the nexus approach. Each sector and silo's needed reforms have to promote efficiency and avoid cost externalization to other sectors, to marginalized sections of society and to the environment. The second call is for meaningful involvement of all stakeholders. Trade-offs and win-win strategies need a policy terrain that is more horizontal, plural, inclusive and democratic. Top-down authoritarian approaches are not conducive to finding complementarities of interests or avoiding harm to unsuspecting others, which is why different SDGs must consider the nexus approach. The third is to provide nexus research expanded financial, institutional, technical and intellectual resources, mostly by redirecting a part of that already available in different sectors and silos. Such redirecting would enable silo practitioners to understand impacts and unintended consequences, and to understand what difference to expect from the nexus as opposed to business-as-usual approaches.

In addition to these messages, the chapters in the two broad groups with discontinuously numbered chapters have additional important ideas. In the tools group, Chapter 2 (Daher and Mohtar) describe the details of WEF Nexus Tool 2.0 and its application to the oil-rich but arid Qatar. Improving over water-focused WEAP, energy-focused LEAP or climate- and land-focused CLEWS,[1] this tool tries to be more inclusive, multi-scale, better quantifying interconnections and claims to help develop useful planning scenarios. As with all such modelling exercises, much depends on data availability and reliability, the readiness of sector protagonists to share them, and the difficulty in incorporating constant changes in a non-stationary world, as the authors admit.

Chapter 3 (Mirzabaev et al.) deals with the generic problems of bioenergy and its link with social issues such as health and gender. It argues that leapfrogging to more energy-efficient technologies require simultaneous leapfrogging in institutional remodeling, which in turn is based on critical trade-offs that are inherently deeply political. It is one of the few chapters in the book that explicitly acknowledges the role of politics, which requires much more research on drivers of innovation and their welfare aspects at household and community level.

Chapters 4 (Mayor et al.), 5 (Graham, Jackle and Martin), and 7 (Meza et al.) deal with applying nexus tools at basin, sector and country scales respectively. The first is a study based on the Duero Basin of Spain that discusses the limitations posed by rising energy prices, the limitations to water treatment and the challenges posed by new demands of hydraulic fracking. It shows that, while water and energy are considered together in planning, in practice (as in many other countries) there is nothing joint between the institutions managing them separately. The second by Graham et al. considers the problems of "produced water" from fracking by the oil sector in New Mexico. It demonstrates that any effort to reduce freshwater use in this very arid zone and replace it with the significant volumes of treated "produced water" would have substantial impact on areas ranging from groundwater to reduced truck traffic in highways. The third looks at four different regions of Chile that have problems with water stress from copper extraction, urban growth, agriculture, hydropower and groundwater overexploitation. The flows between these sectors, their cost externalization to others, climate change consequences and the limits of solutions under weak governance are some of the aspects brought together.

The last Chapter 12 (Hack) of the collection comes off appropriately as a summary of the problems of both the tools and governance subsections of the book. It looks at payments for ecosystem services (PES) in the context of Nicaragua as an alternative or complement to traditional environmental policy instruments. It acknowledges that IWRM is in decline, and allocating financial resources for environmental protection via fund mechanisms have failed. Given that there is too much complexity behind environmental protection issues, PES allowed site-specific and problem-oriented institutional arrangements where inherent mismatch exists between them and the biophysical systems they hope to manage.

These ideas of trade-offs, plurality of policy interactions, cost externalization in silo policy making, as well as risks and uncertainties in the process of dynamic change are further explored in the governance group of chapters. Chapter 1 (Mekonen et al.) uses the example of Pakistan's large contiguous irrigation system on the tributaries of the Indus to discuss the value of local institutions such as the water users' association. Being closer to and better acquainted with ground conditions they demonstrate better capacity to achieve nexus efficiency and thus overall good governance aims. Chapter 6 (Kibaroglu and Gursoy) examine transboundary water governance in the Tigres-Eurphrates basin between Turkey, Syria and Iraq. Despite the acute conflict, actually open warfare, situation eventually ending in an impasse since 2009, political will at the highest level, when there was a peace window available, did allow forming a high-level strategic council. Such a cooperative governance arrangement examined out-of-the-box possibilities such as shift to drought resistant crops, cloud-seeding etc. that would have allowed at least exploring a win-win nexus approach of trade-offs.

Chapter 8 (Bekchanov et al.) looks at another type of transboundary water governance, this time in Central Asia's Amu Darya river and the proposed Rogun high dam in the aftermath of the collapse of the Soviet Union. It looks at benefits of joint optimization between upstream Tajikistan and downstream Uzbekistan versus a go-it-alone approach by the upstream hydropower developer and concludes that the former is unsurprisingly better. As a student in the hydropower department of Moscow Energy Institute in the 1970s, this reviewer had to sit through many lectures by designers and planners of Rogun, Nurek and Tokhtogul dams in the basin, together with fellow students from Central Asia. This article is rather weak on the political history of this enterprise and also does not take into account the significant flow regulations already provided by the other two high dams, factors that have serious consequences in applying the Nexus approach to transboundary water problems.

Chapter 9 (Halbe et al.) uses a tool – CLD or Causal Loop Diagram – to develop a participatory WEF modelling for Cyprus incorporating innovations. It thus perhaps belongs more to the tools section rather than the governance section of the book. It concludes that the model becomes too unwieldy for a complete nexus modelling but is good for qualitative analysis as an overview of complexity for government agencies. It would help them to move from control-and-predict paradigm to an adaptive and integrative, piecemeal approach management one by demonstrating various limits to the former.

Chapter 10 (Gain et al.) is a WEF literature review with its insights used to highlight implications for Bangladesh where the nexus approach is not recognized in policy. It makes a plea for inter-ministerial collaboration for a nexus approach to force sectors to optimize mutual balance rather than individual benefit maximization. The chapter seems to assume that political forces that currently benefit from the status quo will somehow see the light and do the right thing. Unlike this chapter, Chapter 11 (Hensengerth) uses the concept of hydro-hegemony and counter hegemony in the case of the Xayaburi dam in Laos to understand the political dynamics behind changing spheres of authority and how it affects application of the nexus approach. It argues that, once transboundary water issues see the entry of international organizations – from global financiers to multi-country basin commissions – national water organizations come up against the limits of their silo authorities. A process of elites in different silos forming alliances with international actors ensues and redefines the North-South hegemony relationship, including proving that hegemony can be bought.

In judging the overall merit of the collection, one must admit that it is a useful compendium for researchers looking for specific tools or nexus governance contexts in different areas of the world. However, there are also important areas it does not examine or touches only in passing. One is climate change and a few chapters mention it but do not adequately scrutinize it. Also, briefly touched in some chapters but not adequately examined is the impact of water and energy footprints (and the problems of virtual embedded water), which are going to be key environmental issues in the years ahead with much of the success of the nexus approach depending on properly engaging with the concept. While data inadequacy or relative incomparability between sectors is acknowledged by many chapters, the bull has not been grabbed by the horns in the governance section. And while sustainability figures in the title, there is little by way of conceptual engagement in the different chapters.

The biggest shortcoming in this collection, especially in the governance section, is the brief acknowledgement but inadequate analysis of the politics behind silos retaining the current status quo and the kind of politics that would be needed if they were to be forced into integrated governance using the nexus approach. While it is understandable that not every aspect can be fully covered in one volume, one wonders why the 2014 Bonn Conference was not able to give more attention to this issue.

To begin analyzing that, one would have to go to other publications on the nexus from the Routledge stable that deal with this thorny but vital issue. One good place is Kumar et al. (2014) which integrates global discourse with Indian ground realities and arguing how, sustainability being the need to provide for future generations, the current trajectory can be turned by focusing on resource politics. Another publication that bring politics to the forefront of the nexus discourse from the Routledge stable is Allouche et al. (2019) as well as Gyawali (2015) that also fed into it. They argue, as a review in Water Alternatives described it, that nexus conceived of as an optimizing game would "favour and reproduce existing power asymmetries rather than open space for more complex and democratic decision-making".

Both IWRM and the nexus approach are essentially political processes that need to be fed by ethics and a concern for justice in making contested values visible. Other efforts at Water Alternatives have tried to further that end. A special issue of the journal (Water Alternatives Vol 8, Issue 1 of 2015) interrogated the power linkages behind the nexus while its April 2020 Dissensus Forum on the nexus debated those linkages in depth. The different authors of the Bhaduri et al. volume reviewed here might need to take those extra uncomfortable steps in their next foray and address how either the tools or the governance interventions needed that they describe might need to address the politics of the nexus approach more directly. That would be a key element of the much-needed trans-disciplinarity that is key to the policy shift that this approach is clamouring for.

[1] These are acronyms of models. WEAP stands for Water Evaluation and Planning; LEAP for Long-range Energy Alternatives Planning System or Low Emissions Analysis Platform; and CLEWS for Climate, Land, Energy and Water Systems.