Tapping the oceans. Seawater desalination and the political ecology of water (Williams and Swyngedouw, 2018) 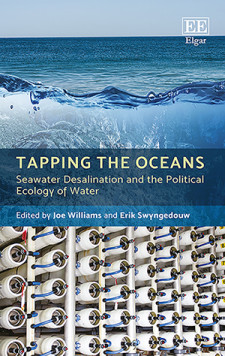 Few people, even in the water sector, probably realise that the desal industry currently claims to manage 19,000 units of all sizes globally, serving 300 million customers. In other words, this sector is now evolving from a capital intensive oddity largely confined to Middle Eastern oil-rich countries into a fashionable and commonplace ultimate solution to water scarcity. The volume Tapping the Oceans: Seawater Desalination and the Political Ecology of Water, edited by Joseph Williams and Erik Swyngedouw, is thus a timely and insightful introduction to the entanglements of water, salt, power, and capital in the emergence of seawater desalination as a major feature – and maybe a future game changer – of the 21st-century water agenda. It includes ten chapters with eight case studies, spanning California, Mexico, Chile, UK, Spain, Israel, South Africa, and Singapore.

The chapter on Spain, by Sauri and colleagues, provides a useful recollection of how desalination has actually been actively discussed since as early as the 1950s, and has been associated with nuclear energy in the US global influence strategy. It was also considered by Franco's regime, with desal plants planned as early as the 1960s as a solution to Barcelona's water supply. Large water projects (dams, irrigation, interbasin transfers) were eventually given priority, until the socialist government elected in 2004 proposed 30 desal plants as an alternative to the Tajo-Segura transfer proposed by the preceding administration. This rebirth in Spain, but also the dusting off of several old projects in various parts of the world (e.g. Israel or Cape Town), is partly due to the dramatic decrease in unit production costs during the 1990s, which removed a major objection to its adoption.

Several chapters (e.g. on Cape Town or London) stress the familiar discursive strategies by which the desirability and inevitability of desalination is tied to a representation of a drought or scarcity crisis as an external, nature-induced, threatening factor that generates an anxiety which can be turned into consent by heightening the sense of urgency and the legitimacy of state agencies, politicians, or experts to propose an alleged definitive techno-managerial fix. London is considered to be "seriously water-stressed" by the Environment Agency, with prospects of demand outstripping supply if rainfall remains low or climate continues to change.

It is clear from several accounts that desal is primarily developed to sustain and/or allow the expansion of capitalist interests, whether it is mining in Chile, tourism in Baja California and Spain, affluent districts in Cape Town, or a city state in Singapore. Because of the need for large capital outlays and the will of most governments to invite private capital through Build-Operate-Transfer or Public-Private Partnership (PPP) arrangements, sovereign wealth funds and pension schemes have been attracted by such investments because of the possibility of safely capturing a revenue stream over a long period of time as well as public subsidies through PPP arrangements. Likewise, Singapore has tried to accelerate the expansion of its water industry by positioning itself as a 'global hydrohub', "a key node in the global water industry, piggybacking on water technology development as one of the fastest growing sectors worldwide".

The book nicely illustrates the social, economic, and ecological contradictions and vulnerabilities of the desal industry. By using huge amounts of energy to produce new water, it is exposed to price shocks in the energy sector. The UK case shows that desal is highly vulnerable to unfavourable evolutions of energy costs, purchasing power, and customer bills due to regulatory failures to stem corporate and financiers' benefits. Without steadfast and secured demand, plants are likely to remain idle in periods where supply of cheaper alternative sources is available, as observed in Spain. Desal and the commodification of water promote socio-economic inequalities in terms of access, pricing, and quality of water, as shown in the case of Antofagasta, Chile, as well as "increase the distance between the techno-managerial focus of private companies on the one hand and the theatres of democratic public decision-making on the other". While energy requirements and the production of brine are frequently cited as environmental externalities, Feitelson remarks that "there is a tradeoff between the local, current, negative effects of desalination facilities on marine life and the wider and potentially longer term benefits of retaining more water in nature and adapting to climate change".

The various case studies in this volume provide fascinating stories where crises and water scarcity are transformed into profits through a solution marketed as an apolitical revolutionary green technology that has the potential to drought proof cities and businesses, while providing "a false sense of abundance and fuel[ling] a fresh increase in demand that will eventually lead to another period of scarcity or crisis". But they also reveal how desalination contributes to mediating a trend towards the commodification and privatisation of urban water services, how water governance is being rescaled, and how desal appears as the latest frontier of capital in the promotion of supply-side capital-intensive infrastructural solutions.

Wether a maladaptation to energy and climate challenges, a greenwashing technology, a 'technical fix'; or a silver bullet, a turnkey solution, or a "conflict-free and resilient solution to the global water challenges of the 21st century", desalination is breaking into our water future, and this book will be a key primer for those interested in deciphering its emergence.