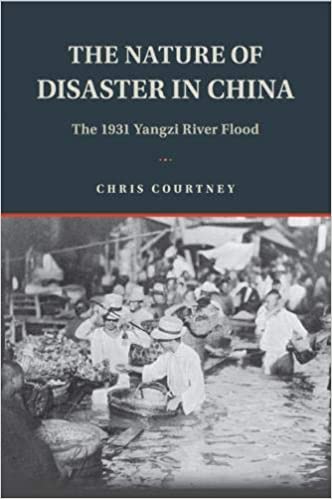 A catastrophe cannot be meaningfully captured in a single snapshot. Their impacts are invariably multidimensional and traumas associated with loss often linger for decades. But are disasters only the sum total of the devastations they cause and the carnage they leave in their wake? Chris Courtney thinks otherwise. Through a comprehensive study of the Yangzi river flood of 1931  ̶  which swamped 18,000 square kilometres in central China and affected between 25 to 53 million people  ̶  he draws out a strikingly complex picture to argue that the momentous deluge did not ‘simply interrupt history’ but helped ‘make it’ (pg.9). To suggest, however, that disasters can be ingredients in the making of history brings up the vexatious problem of agency. Namely, what, how and who gets to shape outcomes during moments of chaos and loss of control? Questions that can become particularly perplexing for the field of disaster studies, which, as yet, remains in a conceptual impasse of sorts: either blaming Nature for everything or holding humans exclusively responsible for causing disasters.

In six crisply written chapters, Courtney ably navigates between the Scylla of Nature and the Charybdis of the human to anchor his arguments and claims somewhere in the middle with his notion of a ‘disaster regime’─ the unique ‘configuration of human-environmental relations in a specific geographic setting at a particular period of time’ (pg.11).

The first chapter beguilingly titled the ‘long river’ focusses on the Yangzi by tracing the river’s origins in geological time. In particular, directing our attention to the stretch of the river which straddles an ‘intermediary zone between the hammer and anvil of two monsoons’ (pg.20). Accordingly, while the East Asian monsoon brings precipitation, the South Asian monsoon dumps rain and snowfall in the upper reaches, which can abruptly transform into copious and raucous flows further downstream. This proneness of the Yangzi to regularly flood the crowded city of Wuhan and the Hubei province, Courtney avers, is thus a result of an inbuilt fluvial rhythm and process rather than a one–off shock disaster event per se. These seasonal flood pulses, moreover, brought down a ‘nutrient-rich cocktail of minerals and water’ (pg.23) that turned the floodplains into a uniquely ‘rich mosaic of aquatic, riparian and terrestrial habitats’ (pg.22). Unsurprisingly, with the plains thus brimming with flora and fauna, humans were naturally drawn towards them with the pioneering settlements, Courtney points out, evolving a distinct ‘wetland culture’ ─ adjusting with the flood regime and pursuing a mix of hunting, gathering and flood recession agriculture.

In the course of several centuries, however, these flood dependent wetland cultures found themselves systematically pushed to the margins with the triumphal march of sedentary agriculturalists, who chose to cultivate rice in paddy fields that were now kept relatively insulated from the seasonal inundations with infrastructures such as dykes and polders. In this ‘sedentist’ agro-ecosystem not only did the rivers, on being bottled up between embankments, turn more volatile but the altered flows ended up creating a range of microbial environments that bred innumerable types of pathogens. The expansion of settled agriculture, in effect, for Courtney, set in motion a series of linked consequences involving  increased rice output, population growth, heightened flood vulnerability, the aggravation of famine conditions and a rise in epidemics.

Chapter two, titled as the ‘Flood Pulse’ puts the river under a microscope for a look at how flood vulnerability unravelled at a granular level. Courtney shows that in flood ravaged Wuhan more deaths resulted from malaria, typhoid fever and dysentery than from drowning and starvation. Paradoxically, he also notes, while displacement and malnourishment of the flood affected diminished their immunity and made their exposure to infectious diseases even more lethal, those who had the ability to harvest the flood induced ‘nutritional windfall’ (pg.72) ─ fish, birds and aquatic plants ─ tended to survive and cope much better. In other words, even as the settled agriculturists and the inhabitants of Wuhan found themselves defenceless against the raging flood waters, those who possessed or remembered the still extant skills and knowledges of the much maligned wetland cultures survived by harnessing the many ecological and biological riches that the currents invariably threw up.

In chapter three and four, the gaze is shifted wholly onto the human. Courtney focusses on how the Yangzi flood created contexts for western social and modernization ideas to gain traction within 1930s China. Notably, for example, in the emergence of a muscular critique of the cult of the Dragon King in Wuhan, which traditionally offered religious explanations and solace for dealing with the floods. In contrast, the more compelling evidence based causes that typified a scientific understanding and secular reasoning now encouraged  foreign Christian missionaries, the Chinese nationalists and the communists to openly take on the cult by accusing their followers of promoting fatalism and passivity before nature. Assuaging dragons and interpreting the intentions of spirits, however, rested on deep cultural foundations. The assemblage of temples, deities, prayers, festivals and rituals, Courtney explains, often ensured social cohesion and stability when political authority broke down.

Unsurprisingly as well, the modern expectation of policy makers for flood victims to behave rationally, amidst their suffering and fear of imminent death, proved equally misplaced. By keenly studying hitherto ignored details in newspapers, accounts by flood victims and the reportage of several international visitors and officials, Courtney provides us a stunning survey of emotions to outline how disasters unravelled as a ‘succession of horrifying sights, strange sounds, painful sensations and repellent odours’ (p.122). That is, people caught within the whirl of the flood revealed themselves in desperate moments of grief, shock and alarm rather than as rational actors making cool headed choices.

Chapter five and six further flesh out China’s flood ravaged reckoning with the modern. The relief effort carried out by the Chiang Kai-shek’s nationalist government and supporting organizations, Courtney points out, were overwhelmingly framed within the language of the technical expert ─ ‘abstract economic concepts, medical theories and scientific terminology’ (p.155). These secular assumptions, however, effectively proved to be but Malthusian inspired sociology that was rolled into laissez faire economics. Official policies and actions, hence, were strongly underwritten by anxieties about population growth, the tendency to view the poor as inherently lazy, demands that flood victims remain productive through hard work and the unhesitating use of violence by the military and police to enforce law and order. In contrast, the traditional infrastructures for care and support rendered by civic organizations, local communities, monks and even kinship systems tended to be relatively more generous and less ideologically charged. Unsurprisingly, therefore, while modernity and scientific management found ready purchase amongst the elite, the impoverished and marginal largely tended to gravitate to the familiarity of custom and tradition.

Upon assuming power in 1949, the Communists under Mao, however, became even more convinced and committed to the idea that the ‘flooding of the floodplain was somehow undesirable’ (pg. 243). Consequently, the new dispensation proved even less accommodating of the vestiges of wetland cultures and vigorously set about draining marshes, deforesting hillsides, channelizing rivers and reclaiming lakes. Though mass hunger and deaths from epidemics from flood events were eradicated in time through a range of governance strategies, Courtney underlines that flood control projects under the communists continued to find favour with embankments, diversion structures and large dams. The direction of the disaster regime of the 1930s, in other words, was merely recalibrated and not fundamentally changed.

The Nature of Disaster in China is fluently written, sumptuous in detail and compels us to reconsider the full significance of the 1931 Yangzi floods: not as a disaster event but as a portentous moment of reckoning in which the old Confucian social order abraded and twisted against the new political promises of modern science and secular thinking. Courtney’s contribution is seminal and tells us that much is yet to be discovered and revealed at the intersection of disaster studies and environmental history.