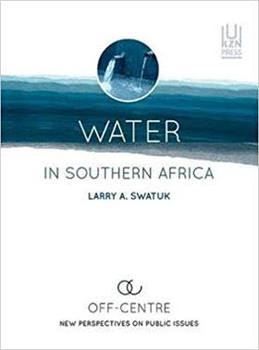 This book is the first volume in a new series that aims at being accessible on issues of public interest by ‘utilising the best of academic scholarship to challenge and correct conventional wisdom.’ The book fulfils this mandate set by the series editors. The current review highlights a few key features of the book. The book is organized in five chapters and a conclusion: Chapter 1: A glass Half Full, Chapter 2: Mapping Underdevelopment: Toward a Political Economy of Water in Southern Africa, Chapter 3: Seeing Water: How much Water Is There, for Whom and What?, Chapter 4: Using Water: Consumptive and Non-Consumptive Water Use in the SADC States, Chapter 5: Sharing Water: Transboundary Waters in the SADC and the Conclusion entitled: A Glass Half Full: In Pursuit of Clinical Politics. The book raises some excitement within the water literature hence the following comments.

The book engages with the so-called issue of water scarcity in Southern Africa. It drives home the point that when people talk about water scarcity the focus is largely centered on blue water. Such framing, according to Swatuk’s book, has major weaknesses. Whilst blue water is important, most of the Southern Africa Development Community (SADC) countries largely rely on green water. The author further argues that to better understand water in a holistic manner it is important to look at blue, green and virtual water. Swatuk also draws from the International Water Management Institute (IWMI)’s 2007 Comprehensive Assessment that framed scarcity as comprising physical water scarcity (resource availability) and economic water scarcity (lack of financial resources to exploit available water resources). What this remind us is that the way scarcity and water challenges are framed is likely to limit the scope and range of the solutions proposed and implemented. This is an important point that needs to be understood within the context of water in southern Africa as, once such half-truths gain currency, they are recycled in international arenas. This demonstrates the power of framing ideas and knowledge. Once ideas or narratives are ‘established’ as conventional wisdom, there are very little possibilities to challenge such misnomers.

Chapter 1 raises an important point, which is that there is a need to ask unconventional questions on the political economy of water and Integrated Water Resource Management (IWRM). The author further argues that there is a need to bring agency to bear on structure by noting the role of individual initiatives in shaping and reconfiguring institutions and rules. The author highlights the need for better understanding of the shaping of institutions, which is a noble call. However, it would have been a welcome addition if the author had identified and recommended credible and implementable solutions that could lead to improved livelihoods for men and women within the Southern Africa Development Community (SADC) area and beyond. One interesting angle would be how to move away from the same Einsteinian quagmire whereby the tools that lead to the current water challenges are still being used.

Chapter 2 focuses on the theme of the political economy of water in the Southern Africa region. The author argues that decisions made on water by politicians are informed by their positions of power and their vested interests. In the pre-colonial period, access to water resources both for domestic and productive water use was based on colonial and apartheid interests. In the post-colonial and post-apartheid scenario, the vested interests of those in power continue to shape the political economy of water. This is in line with researchers such as Boelens (2014) and Mollinga (2008) who have long highlighted that water can defy gravity and flows in the direction of power. Swatuk notes that, in the SADC region, there tends to be poor water supply in the poorer sections of the urban areas, which contrasts with better provision for the affluent neighborhoods (see also Kamete, 2016, 2017). This discrepancy also extends to rural areas where commercial farmers have better access to water as compared to smallholder farmers. Such inequalities in access to water are masked over usually by the provisions of global figures, which are not disaggregated to bring out the discrepancies of access to the important water resources (see also Cullis and van Koppen, 2009).

Chapter 3 looks at the global and neo-hegemony, which, according to the author, are also at play in Integrated Water Resource Management (IWRM) that seeks to further entrench the 1992 Dublin Principles and a neoliberal agenda in the SADC region. This notably happens through the establishment of the SADC Water Protocol and River Basin Organizations (RBOs). Swatuk notes that the water unit in SADC, which addresses water related issues within the 15 member region, relies on external funding with donor countries having seconded staff to support the unit. Whilst such a view might imply hegemony (Gramsci, 1971; Henk, 2000) the neoliberal agenda does not have absolute power over developing countries. It is contested using various mechanisms, which include acceptance of the idea but variance, or undermining implementation processes. One of the observations by Swatuk was that RBOs are supposed to be given more power but, in practice, most SADC countries insist on their sovereignty and keep major decision-making power within their national water departments. Such IWRM international discourses are contested at different levels hence the neo-hegemonic perspective – where the dominant narrative is not all-powerful but is contested and challenged through implementation.

Chapter 3 further looks at the role of non-state actors and civil society as offering an opportunity to transform water “subjects” to water “citizens”. Maybe this further reinforces what Mamdani (1996) calls ‘citizens’ who have access to services and ‘subjects’ who do not have access to services (Desai, 2018; Kamete, 2018, 2016). He draws on experiences from South Africa on how the formerly apartheid shacks are being improved into better accommodation with adequate water resources through civil society engagement. Whilst globalization was earlier noted as advancing the neoliberal agenda within the water sector, in this case, globalization is said to offer global networking opportunities that support the human and water rights of the residents of the shack settlements. Civil society organizations are establishing alliances across the globe to help address the water challenges within the informal sector. The alliances are also challenging the state view and policies and helping residents of the informal settlements to be regularized and provided with essential services that include water. In South Africa, the shack residents have also used their voice through protests and campaigns to help stake their claim to water as a basic human right as provided for under the constitution of South Africa. Whilst such activism is visible in South Africa, this is not the case in other countries within the SADC. Civil society engagements within globalized platforms further reinforces the need for a nuanced and critical analysis of global processes and their multiple and sometimes contradictory outcomes.

Chapter 4 looks at consumptive and non-consumptive water use in the SADC countries. This chapter provides an overview of waters laws. What is intriguing is that most of the summary data figures and tables are based on data from 2011 with the most recent data being 2014. This chapter helps highlight a major challenges, that of availability of data within developing countries. This is an area where, in my view, investments need to be made into collating national and SADC level data.

Chapter 5 looks at sharing water across borders. The chapter looks at how water protocols developed over time and highlights the important role played by national governments. One area that could have been further extended was to historicize the member countries engagement based on their colonial legacies. The book covers extensively the importance of the Apartheid regime in South Africa, but if one also considers the role of the British, the French and the Portuguese and how they impacted the post-colonial states this might have brought out even more interesting insights. One of the key themes on transboundary water governance that, in my view, warranted attention is what Grey and Sadoff (2002) call benefit sharing. How is this being viewed within SADC where a basket of benefits comes because of water? In SADC for instance, some dams are used to provide hydroelectric power and form part of SADC Power Pool that is used across borders

Chapter 5 further looks at why “beautiful policies” are not translating into action. The author uses Jonker’s statement that ‘if you are always planning, then you are never failing’ to explain this state of affair. The second explanation for lack on implementation is drawn from chapter 2 where those in power would like to maintain the status quo. There is, however, a need to go beyond the two explanations expressed above. Drawing on the South Africa case study, for instance, where water and other services are provided after civic activities such as demonstrations clearly shows a continuum between the two points above. Politicians, in my view, would like to gain mileage through provision of services such as water, which is balanced with maintaining their status core. This moves towards going beyond the two binaries towards a continuum along which politicians are always balancing their interests and demands from the public.

The book addresses issues of equity towards accessing water resources. Whilst the book addresses the issues of race and class in determining one’s access to water resources, one area where more could have been done is on the gendered nature of access to water resources within the SADC countries. Patriarchy is a major hindrance for women accessing land and water within the SADC region. It is therefore imperative that gender is addressed to enable improved land and water productivity whilst at the same time contributing towards the attainment of Sustainable Development Goals 1, 2, 5 and 6.

The book provides an excellent critique of the way water is being managed within SADC. However, it gives the reader an appetite and yearning for more practical solutions, which are beyond the current business as usual approach. For this, the author provides some pointers to more detailed subject-based literature. However, one still gets a feeling that more could have been said to further engage academics and policy makers who would like to see sustainable and socially inclusive water governance within the SADC region and possibly inform other developing regions as well. However, this was not what the author set out to accomplish. I encourage readers to read the book for themselves for a handy summation of the current water challenges in the SADC region and beyond.

Giddens, A. 1984. The Constitution Of Society: An outline of the theory of structuration. Cambridge: Polity Press.