Underwater: Loss, flood insurance, and the moral economy of climate change in the United States (Elliott, 2020) 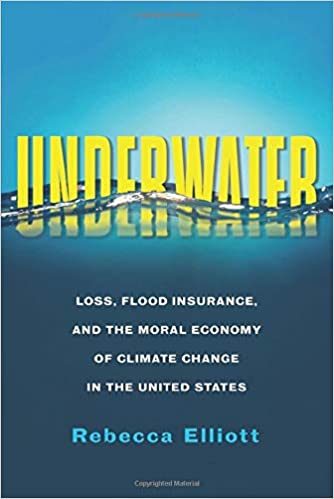 This book’s teaser makes the remarkable claim that it is the “first in-depth account of the politics and social effects of the U.S. National Flood Insurance Program”. While this claim invites skepticism due to the 50-year history of the program, it seems true because the extensive literature about the NFIP mainly comprises technical and economic studies and reports about the politics and social effects of the NFIP are scattered.

The author, an assistant professor in the Department of Sociology at the London School of Economics and Political Science, started the research as a doctoral dissertation. Her work expanded to include archival, interview, ethnographic, and other documentary data with a goal to shift the focus from flood insurance as a rational risk management solution to its effects on justice and equity.

The NFIP was born with the 1968 Flood Insurance Act and has been through several phases of review, reform, and policy analysis. The original need was driven by repetitive flood disasters that drove political action to extend relief for losses and suffering. The original thinking, however naïve, was that offloading this political liability to a self-funded government program would be a good policy move to streamline government obligations (Grigg, 2019). Things turned out differently, and the unexpected outcomes form the nucleus of the problems addressed by Professor Elliott.

The discussion ranges from science to politics and deals with how climate-induced risks create moral dilemmas in the context of flooding and risk mitigation strategies based on insurance. At the end of the methodology section, the author sums it up: “My years of work on the NFIP coincided with the release of increasingly detailed, scary, and urgent warnings from climate scientists about how our world has already changed and what may be in store” (p 224). She is intrigued by the power and agility of different kinds of insurance to mediate society’s responses to human needs. She capsulizes this key point in the last two sentences of the book: “Reading these reports led me to reckon, intellectually and emotionally, with the question of how societies face destabilizing losses. Insurance provides a way to engage productively with that question” (p.224).

The book provides a comprehensive explanation of the NFIP, including a detailed timeline of flood policy from 1917 to 2008. The author attributes the inherent problems and challenges of the NFIP to the fact that the program frames flood risk in economic terms with a focus on location and vulnerability of structures and facilities. Analysis of historical weather patterns drives hydraulic studies on the basis of which the extent of flooding is predicted and vulnerable areas are mapped. This lays the basis for drawing flood risk maps.

She explains that this leads to an “economization” of risk and that, accordingly, it is not surprising that the NFIP has encountered many issues, ranging from problems of mapping to bankruptcy. The book explains the extensive efforts to reform the NFIP, which have mainly focused on financial integrity, including rearrangement of subsidies and elimination of claims from repetitive flooding. This leads the author to engage with what she names “the morality of the NFIP”, which constitute the major focus of the book.

Morality is a broad subject, but the author’s focuses on unfair insurance rates as a cause what she claims are inequities of the NFIP. The author approaches these from a “moral economics” standpoint, which she explains takes her to a different analytical plane than the NFIP itself. The book’s teaser explains that it explores “how families, communities, and governments confront flood loss under climate change”. The book then addresses the redistributions of risk and responsibility to determine, as the author states, “how we live with each other, the terms upon which we organize our interdependence” (p.191). To differentiate between the terms of moral hazard and moral economics, the author explains moral hazard to mean the perverse incentive that subsidized flood insurance may constitute as, she argues, people may not work as hard to avoid losses as they would if they were not indemnified. This is, of course, a core issue in other types of insurance; for example, people who do not pay directly for their health care may opt for more discretionary and expensive tests than they need.

The conjunction of the moral economy and the technical difficulties of the NFIP leads back to the dilemmas of protecting society from natural hazards. The author sees insurance as a useful tool to mediate the many shifting responsibilities to pay and rights to receive benefits. Her core discipline of sociology offers new thinking to the interdisciplinary issue of flooding, with sub-disciplines such as economic sociology, political sociology, and environmental sociality.

While my review is complimentary, there are aspects to criticize, not as serious flaws but as opinions. First the discussions seem long and often covering the same ground. This is evident, for example, from the discussions of the morality of the NFIP in the 31-page introduction and 45-page conclusions. Another opinion is that the author may go overboard in embracing an extreme view of the hazards of climate change and the dim prospects of the NFIP. She writes, for instance, that “everyone seems to agree that the NFIP has failed and is worsening the problem it was intended to solve”. A final observation is that the book identifies shortcomings of the NFIP, but it offers no pathway toward solutions. On this point, a distinguished anthropologist explained that the research undertaken here is complex enough without reaching into the policy realm. Perhaps the best view is that the author now hands off the baton to policy researchers.

While the issues of flood insurance and moral economy quickly evolve into a wicked problem, confronting them also presents an opportunity: to determine how people can create, through their government, a social contract that outlines integrated roles and responsibilities to manage flood risk satisfactorily. Professor Elliott’s book makes a valuable contribution toward exploring what that social contract might look like.