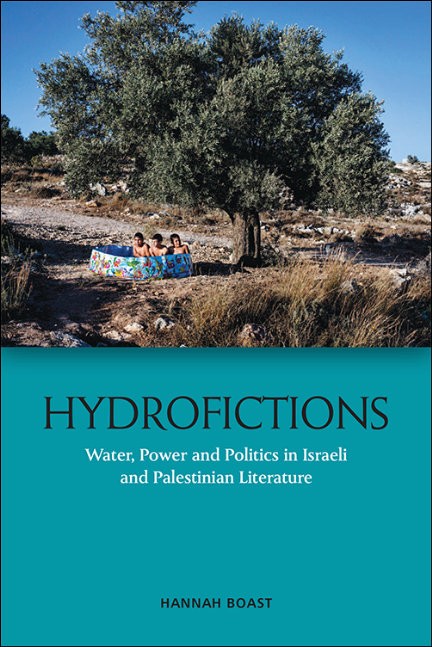 There is very little space left for analysis of water use and abuse in and around Israel, and the West Bank and Gaza. Hundreds of thinkers from all across the political and academic spectrums have weighed-in, and for well over half a century, the Jordan River has been the font of multiple types of knowledge: gushing acclamations of advances in technology, unchecked assertions that water did/will lead to war/peace, forensic documentation of the effects of war, intense appeals for equal access, and detailed examinations of the mechanisms by which injustices are perpetuated. Meanwhile, undergraduate and master’s students from across the globe seek gaps that have long been plugged, while the new media sells the topic to their consumers/readers in the same three ways (water wonders, water peace, water war) that newspaper editors before them did.

Yet Hannah Boast has found a way in, and a very effective one at that. Reading her Hydrofictions: Water, Power, and Politics in Israeli and Palestinian Literature (Edinburgh University Press, 2020) is as refreshing as a stop at a desert spring, and will be of interest to students of the conflict and theory, alike.

The novelty of her contribution is to bring novels and poetry to bear on the topic.

The power of fictional literature, Boast asserts, stems from its ability to allow people to imagine how things might be otherwise. To imagine a dystopian alternative to the present reality, for example, where Palestinians capture and divert nine out of every ten drops of rain that falls west of the river – as author Assaf Gavron has done. Through a light review of his novel at the outset of her book, Boast leads her readers to wonder why the premise is so fantastical – and so to realise just how central politics and power are to the game.

‘Imagination’ may be anathema to water researchers, for we are trained to develop arguments based on facts. Boast engages with the academic hydropolitical literature handily, however, and her analysis places her squarely in the more critical research vein (i.e. Selby). To this she promotes a complimentary analytical tool. Hydrofiction, Boast asserts, “asks what literary texts might tell us about what political ecologists call ‘hydrosocial relations’ ”.

Well-known processes like the hydrological cycle take on a whole new meaning, as a result. Reading Mahmoud Darwish’s A River Dies of Thirst within a larger body of Palestinian national poetry (one where “clouds, drops of rain, and tears proliferate”), for example, the blunt shock of being forced to leave your fields is evoked in a way that environmental justice lenses and language would struggle with. Boast suggests that the “global movement of the water cycle provides a way to imagine an intimate connection to the land even in exile, with his tears over its loss still irrigating the land when he is unable to care for it directly”. Or, as poet Nathalie Handel writes in her Lives of Rain:

Rain, he tells me, carries rumours of the dead,

of those with suitcases and epidemics.

Rain carries the memory of droughts,

and sometimes return to a life

Scholars of environmental policy and politics (myself included) might have reduced this to an ‘examination of the role of water in the livelihoods of environmental refugees’, concluding that it ‘facilitates the degradation of social and political capital’, or something.

Boast’s agility with hydropolitics is further demonstrated through her STS-like investigation into the techno-managerial and ideological mindset held so firmly by Israel’s state-builders in the 1950s. No longer a historic footnote, Israel’s iconic diversion of the headwaters of the Jordan River become a very present and relevant outcome of the agricultural and state-building components of Zionism (a topic few other than Alatout have incorporated into hydropolitics).

Boast does this by pulling out the prevailing attitudes of the Shalev’s colonizers, in his 1988 novel The Blue Mountain, which is set amidst the draining of the Huleh marshes. The indigenous Palestinians, Shalev’s protagonists remark, are wasteful, unproductive – and other adjectives conjured to render the late-comers’ actions more palatable to themselves. The analysis is taken further, however, when she backs up the review into the context within which the novel was written: the 1980s ‘revisionist’ period in which Israeli historians questioned some of the state’s founding myths (e.g. Benny Morris). She takes up the Israeli poet Yehuda Amichai as a more current example of someone forced to attempt to reconcile their Zionism with concerns for environmental issues, if not quite universal rights:

When I was young I believed with all my heart the

Huleh swamp had to be drained.

Then all the bright-coloured birds fled for their lives.

Because it was all a mistake. Perhaps my entire life I’ve been living a mistake.

Boast also reaches for academic writing on water and citizenship (notably Kaika and Swyngedouw, and Anand), to interpret Sayed Kashua’s Let it Be Morning. The tables are turned again here, as Israeli citizens suffer the fracturing of their household and nations when their village’s water supply is abruptly cut-off by the army. Boast describes the descent of civility coldly, noting how Kashua has his protagonists adapt from buying bottled water, to less showering, to peeing in the yard, to cooking without water and living without tea and coffee. The main character insists that “ [f]ood is less of a problem than water… I try not to think about water, because it only makes me thirstier.”

The even more interesting analysis stems from the  fact that the protagonists are Palestinian citizens of Israel. With their water cut off by their national military, the protagonists’ status as second-class citizens is laid bare to themselves, and the village loses stature within Israel. Eventually, the cesspits fill up, raw sewage bubbles up in the streets, and mosquitoes and disease thrive. Stench fills the air, the citizens become filthy, and insults and disgrace are meted out in equal measure. In order to cope, and with the hope of having water restored by their own government, they blame and distance themselves at every opportunity from the Palestinian labourers from the West Bank who work in their village.

Then the penny drops for the reader. If the situation is fictional for the Israeli Palestinians, it is off-page reality for the West Bank Palestinians. They live the reality that we read about.

Policy-oriented analysis would use different words to document the ‘direct, indirect and cumulative impact of protracted armed conflict in semi-urban contexts’, and much meaning would be lost.

The book also engages with debates about the role of literature, which may be new some of this journal’s readers. These should open ideas about framing that are so evident also in the WA database of film reviews. Should Boast’s ‘hydrofiction’ be taken up and developed by others, the development of hydropolitical literature can take its place alongside not just critical hydropolitics, but also ethnographies of water, and comparative literature. If the method allows analysis as refreshing as in this case of Palestinian-Israeli water conflict, then all water researchers are urged to read the book and continue the quest.