Dead in the water... the death of the Murray-Darling Basin (Beasley, 2021) 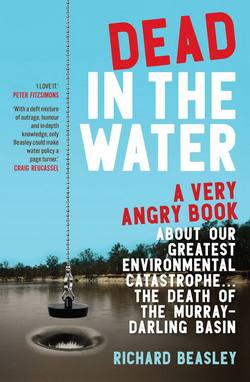 To cite this Review: Perry, C. 2021. Review of "Dead in the water. A very angry book about our greatest environmental catastrophe… the death of the Murray-Darling Basin". Allen & Unwin, 2021, by Richard Beasley, Water Alternatives, http://www.water-alternatives.org/index.php/boh/item/211-dead

Mr Beasley is a successful author of fiction. He is also a prominent Australian lawyer who served as Senior Counsel to a Commission of Inquiry established by the Government of South Australia to investigate whether the Murray Darling Basin Plan (MDBP) was meeting its legally defined objectives.

This book summarises his views on the MDBP and also perhaps provides a salutary lesson to an author of novels: truth is stranger than fiction.

In 2007 the Australian Federal government passed a law—a Water Act—that recognised that the river was over-abstracted, to the detriment of the environment, and required preparation of a Plan to set a "sustainable cap on surface and groundwater use in the basin". Ten billion Australian dollars were set aside for implementation.  This figure has since risen to fourteen billion. Protecting the river’s ecology was not just a local issue.  Australia had signed the Ramsar Convention on wetlands (there are sixteen significant wetlands in the basin) and a number of other international commitments that required protection and enhancement of the basin. In every case, the basic ingredient required to achieve these goals was more water for the environment (and less for other users, most importantly irrigated agriculture).

Determining how much water was required to be recovered from agriculture and re-allocated to the environment is a central theme of the story. The starting range is specified in terms that deserve attention: initial analysis by the Murray Darling Basin Authority (MDBA) reported that returning 3,900 gigalitres [3.9 billion m3] to the environment would achieve the objectives of the Act with a "high level of uncertainty" [sic]. Almost doubling the transfer to 7,600 gigalitres would achieve the required objectives with a "low level of uncertainty". Put in more conventional terms, the lower figure would almost certainly not deliver the required outcome; the higher figure probably would.

The story that unfolds on this relatively simple basis reports how the volume of water to be returned to the environment was negotiated down to just over 2,000 gigalitres, about half of the hopelessly inadequate 3,900 gigalitre target, how the new lower figure was deemed to have been met through physical infrastructure that has not been built; "efficiency" savings that most scientists believe do not exist and in fact may be negative; and perhaps worst of all, though it is a crowded field, "trade-offs" that evaluated an increase in one form of wildlife as compensating for loss of another (elaborated in a section called the Fish Genocide Project).

Water theft; construction of huge bunds to illegally trap natural runoff; officials colluding with lobbyists; politicians "guiding" officials on what the first digit in the target recovery volume should be ("2"— see above); and the Basin Authority refusing to disburse on a research contract until it reached convenient conclusions also figure in the story.  One manipulation of the original Act is especially noteworthy.  The Act required restoration of the river: other legitimate objectives of social and economic policy were to be pursued subject to that basic objective.  By now, the talk is about a “triple bottom line” where environmental, social and economic objectives are given equal weight, allowing shortfalls in environmental outcomes to be justified by better social or economic outcomes.  The Act allowed no such compromise, being based on the relentless logic of hydrology in a closed basin.

The forum in which this unfolded is worth consideration. A Royal Commission is charged with discovery of facts.  It is not an adversarial court with advocates presenting the best possible version of their client’s actions in the hope of persuading a jury.  The role of Counsel (which Mr Beasley filled) is to guide the Commissioner through all the available evidence so that findings represent the Commission’s best view of the facts.  In that context, the refusal of the Federal Government to allow officials to present evidence is remarkable. It is hard to conceive a worse outcome for the Authority, the politicians and other bureaucrats involved (unless their testimony would have been "Yes, that’s what we did.  Criminal, wasn’t it?".)

Yet perhaps the Government, the water-stealers, the crooked bureaucrats and the dishonest researchers have won: the report of the Royal Commission has been shelved, following a change of government in South Australia. None of the 43 recommendations of the Commission has been enacted. The multi-billion program to achieve very little is ongoing. Some farmers who stole water may be fined. But those who deliberately and knowingly avoided compliance with the Act are mostly still in place and unpunished.

Are there heroes in this story? (So far, it’s only villains.)

John Howard, the Prime Minister who addressed the problem and framed the Act.

The scientists who gave evidence, mostly members of the Wentworth Group of Concerned Scientists[1], who no doubt risked future research funding (some scientists declined to join the Group on that basis), and devoted many hours to preparing their testimony and analysis. Their reward has occasionally been abuse.

Internationally, Australia’s proclaimed leadership in water resources management is based on the truly excellent content of the original 2007 Water Act, and the generous funding provided for implementation.

Implementation, however, has failed for a combination of the worst possible reasons.

Researchers are paid to observe, analyse, think, and deliver the outcome of their deliberations as honestly as possible. Failure to do that is not just missing the target, it’s deliberately shooting the audience who paid to watch the show.

This book, some 270 pages, is an astonishingly entertaining read. Mr Beasley’s style is dark—very dark—comedy, though never missing the killer fact. In that spirit, I end with his quote from the late Tom Trevorrow:

Don’t be greedy. Don’t take any more than you need, and respect everything around you.