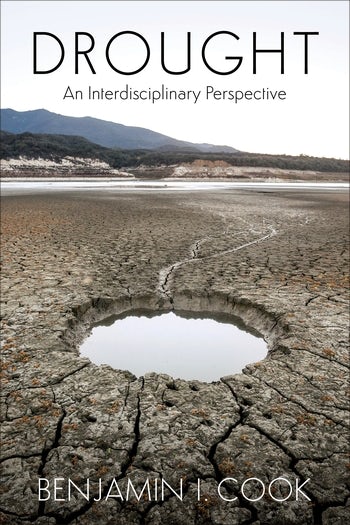 Reading a book when it is well written is such a pleasure. Benjamin Cook’s book Drought An Interdisciplinary Perspective respectively takes the readers by the hand and travels with them through the climatology and hydrology of droughts, often starting from first principles so that this book is accessible to a wide non-specialist audience. With droughts bringing devastating impacts to often the most vulnerable communities, opening up the subject in such an accessible way to those from a range of backgrounds is important so multi-disciplinary mitigation and preparedness responses can be developed and put into place.

The book begins with a detailed analysis of the hydrological cycle describing the various states, fluxes, and dynamics of water, before outlining the differences between drought and aridity, and then the various categories of drought – meteorological, agricultural, hydrological, and socio-economic. With precipitation, temperature, and evapotranspiration so fundamental to drought occurrence and intensity, it is not surprising that Chapter 2 describes in detail the drivers and characteristics of global hydroclimatology. This serves as a precursor to Chapter 3 which helps the reader understand why variability leading to drought occurs from the norms of the general climatology. There is no universal definition of drought, with differences relative to average rainfall and moisture conditions for that time of year and locality, the basis for any drought declaration. Understanding how various atmospheric changes bring those marked decreases in precipitation is explained well, including the sharp “flash droughts” that can bring such devastating impacts even though occurring over a short time.

In the next two chapters the coverage is of long-term trends in droughts, both looking to the past and forward to the future. Chapter 4 focuses on the Holocene and evidence from many different paleo-climate proxy records such as lake sediments, outflow from rivers, and desert dust fluxes found in ocean sediments, highlight wetter and drier times during the last 11,700 years. The regular occurrence of mega droughts – multidecadal to centennial-scale periods of droughts over the last 2,000 years are particularly interesting. Cook highlights that there is a tendency for these to cluster in time suggesting that external forcings such as a decrease in volcanic eruptions and so emissions to the atmosphere as a possible cause. In looking forward in Chapter 5, the likely impacts of anthropogenic climate change on key climatic variables such as land and sea temperature, water holding capacity of air and so moisture and rainfall are described helping the reader understand the causes of the changes in climate being experienced already and in the future. Modelling these variabilities and the predicted likely future conditions is clearly described. The bad news from the model outputs is that future droughts are likely to be longer and more intense.

You will have noticed that the chapters so far have focused on hydro climatic systems, which belies the title of the book which suggests "an interdisciplinary perspective". In the Chapter 6 the focus turns to previous devastating droughts, the Dust Bowl of the 1930s in the United States of America, and the Sahel drought of the late twentieth century. The climate events are described as are the consequent land degradation and then the recovery of ecosystems and agriculture. In the descriptors of the Sahel catastrophe the differences in effects across the region, resulting from social, political and economic factors, are mentioned. The decreases in food production are shown to have been particularly stark in Nigeria, Burkina Faso and Senegal.

In the final two chapters of the book succinct overviews are given of subjects areas that affect and are affected by drought – land degradation and desertification, and groundwater and irrigation. The feedbacks between these land-based changes and atmospheric variability are described highlighting the interconnectedness in these dynamics. The glossary at the end of the book provides clear and useful description of the technical terms used.

To aid the explanation of the subjects covered across the book, various diagrams, maps and graphs are used. The text in the figures can, in a few places, be a little too small for ease of reading but otherwise they bring clarity or illustration to the subject matter. Perhaps what is most surprising in a book on droughts, is the complete lack of an image of a person or for that matter even an animal or landscape. Droughts are experienced, and lives and communities disrupted for many years or even lost but beyond some statistics this is little represented.

This brings me to probably the main criticism of the book. It is an excellent text on the hydro climatology of droughts, but it does not give the interdisciplinary perspective it says in the title. Droughts are social, political, economic and many other forms of lived experience. Anyone who has been involved in working with governments to develop drought policies and planning will know how politicised declaring and managing droughts are.  In some countries for example drought maps during an event are printed out and walked to relevant ministers rather than shared by email or disseminated beyond political control. There are also many emerging ideas around climate justice, and the lived differences in drought vulnerability and exposure arising from many intersectionalities around gender, tribe, cultural group, age, distance from urban area that are not addressed. There are also many challenges to the natural resources systems described in the book, emanating from human responses to droughts. For example, the proliferation of illegal drilling of wells during droughts, to ensure groundwater irrigation continues, is a major problem in many countries and could have been highlighted more in Chapter 8. I realise these subjects could have added many more pages to the book, but they would have brought the human into the inter-disciplinary thinking around droughts.

This book is a valuable addition to the collection of drought texts available. It is was a pleasure to read and review.