Embracing the anaconda: A chronicle of atacameño life and mining in the Andes (Carrasco, 2020) 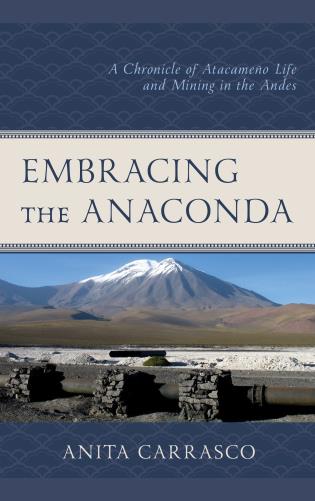 In Embracing the Anaconda: A Chronicle of Atacameño Life and Mining in the Andes, Anita Carrasco offers a clearly written and personal ethnography about people, mining, and water in the high desert of northern Chile. Carrasco is a Chilean anthropologist whose father was a mining geologist and who spent part of her childhood in a Chilean mining town. In this book she describes her Ph.D. dissertation research in another Chilean mining region farther north: the world-famous Chuquicamata copper mine and city of Calama. Her focus is on communities of indigenous people called Atacameños (although the meaning of the term is disputed), who had to adapt their agricultural and pastoral ways of life and uses of water to the impacts of large-scale industrial mining development from the early 1900s.

The book’s title refers to the Anaconda Mining Company, a U.S. corporation that owned and operated copper mines in Chile through much of the 20th century, until nationalized by the Chilean government in 1971. Carrasco remarks on the perception common among many older Atacameños that times were better in the days of the gringo owners than under the current system of government ownership.

Carrasco writes primarily about mining and secondarily about water. Chapters 1, 2, and 6 are the most focused on water rights and uses, and all chapters share a "common theme: the dispossession of water, or puri, in the hands of mining companies, as the central problem that has threatened Atacameño life in the face of mining" (p.13). Ch. 2, "The social life of water", contrasts the cases of two local communities attempting to defend themselves from threats posed by mining companies. Carrasco says that her goal was to write non-academic language for general readers, and she succeeds with a straightforward and often colloquial narrative style (which is an accomplishment for a native Spanish speaker). She introduces and weaves in theoretical concepts and debates in anthropology and related fields, but she has a light touch and keeps those passages brief. Carrasco explains that the book consists of "six stories, which you can think of as chapters. You are free to read these stories in the order that you prefer….in combination, these stories…will offer you a holistic picture of the state of affairs of mining company-indigenous community relations in the Loa River basin in the Atacama Desert" (p.10). I read the stories first in their order in the book, and I found Embracing the Anaconda to be an engaging narrative ethnography written by an author with a personal voice.