Words whispered in water, why the levees broke in Hurricane Katrina (Rosenthal, 2020) 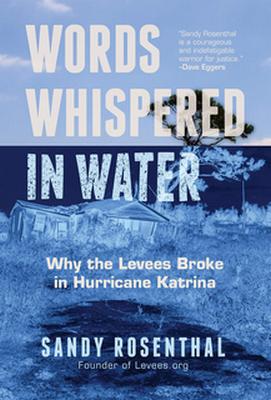 If it is true that in the end we get the governments and environments we deserve, then Sandy Rosenthal’s Words Whispered in Water is a cautionary tale, albeit one with cause for hope. The story of New Orleans’s flooding following Hurricane Katrina is by now a familiar one but one that is fast fading from public discussion and memory. Given human nature and the long list of other “teachable moments” that have come and gone that is no surprise. But Rosenthal points out, if we move on before actually learning and applying the lessons taught in tragedy’s classroom, then we do ourselves and those who come after us a grave disservice.  That is what makes this an important and timely book.

New Orleans has always had a complex relationship with water due to its proximity to the Mississippi River and the Gulf of Mexico. Flooding was a problem from the get-go but the benefits were deemed worth managing those risks. As we got better at pushing nature around, our level of concern went down and we put more and more faith in engineers and public works and more and more trust in government, especially the federal government, to manage flooding risks for us. As a result we built great but brittle systems with less and less accountability. Katrina exposed just how brittle and unaccountable that system had become. But things can be exposed without being fully realized and understood. That might have been the case in New Orleans except for Rosenthal who made it her mission to ensure that the flooding of the Crescent City would lead to a reckoning and to change.

That is the story that Rosenthal tells in Words Whispered in Water and it is a story from which a lot can be learned. Rosenthal herself lived through the breach event and speaks from a position of firsthand experience. Her path to becoming an influential citizen investigator is an important part of this story since how well and how safely we live is ultimately a matter of how much responsibility we take for making our communities work. It is not the business of citizens to design and build flood walls, but it is their business to make sure it is someone’s business and then to hold them to account.

If that sounds like civics, it’s because that is what it is. Words Whispered in Water, in the end, is a story of how communities can work. And when one looks around at the challenges facing us these days, a lot more of that kind of thinking and action is going to be needed.