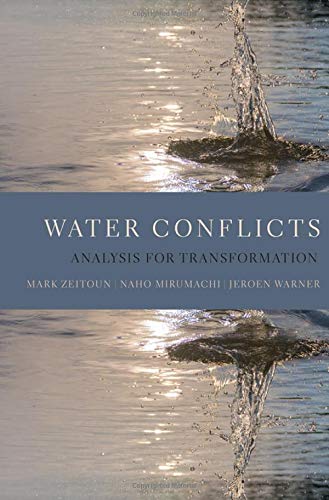 Water Conflicts is at once a distillation of the work conducted over many years by those associated with the London Water Research Group, pioneered by the late Tony Allan, and a rallying cry for transboundary water conflict transformation. Their goal is straightforward: "Our ambition with this book is to help transform at least a few interstate water conflicts, by providing a lucid way to understand and to address their complex nature" (p.1). Their entry point is to focus on the harm done in the name of transboundary water arrangements. Where conflict and cooperation are concerned, this requires that analysts take a careful look at the complex array of social, economic, political and environmental harms that emerge and often persist on the back of formal and informal agreements and arrangements. Conflict resolution, they argue, favors the empowered and generally results either in a return to the status quo or mild reforms with a limited spread of benefits. The book argues in support of new ways of framing events, new ways of seeing and understanding water, integrated approaches to analysis, and a willingness to question almost everything that passes for foundational knowledge and normal science. "The more that research critically evaluates the processes through which inequitable and unsustainable transboundary water arrangements are established and maintained, we are sure, the greater opportunity there is for their transformation" (p.2). How, then, to proceed? "The first step to qualitatively change the harms experienced— both by the most vulnerable water users and by the environment— is to challenge what is politically acceptable in the way we allocate, share, and develop water resources" (p.3). This is, of course, more easily said that done and the book is organized in such a way as to provide the analyst with the necessary tools for critical analysis.

The books packs a great deal of information into seven chapters. Chapter one makes the case for transformational analysis; chapter two, entitled 'Starting Points', focuses primarily on unconventional ways of thinking about what water is and who it is for. The content of the chapter is easily gleaned by a short survey of its sub-titles, e.g., 'Water is altered by human activity more than by nature', 'Thirst can be satiated or created', 'Water flows through political borders…', '…yet remains subordinate to politics and power'. To readers of Water Alternatives, most of whom are well acquainted with the work of Zeitoun, Mirumachi and Warner, these statements come as no surprise. So who, then, are the authors writing for? It seems to me that the authors are aiming to influence all those who are actively engaged in transboundary water access, use and management. In particular, they are interested in representatives of the sovereign state. While in no way ignoring the influence and importance of non-state actors, ideas, interests, forces and factors within and beyond a particular transboundary river basin, "'the state' can impose dominant ideas and visions about water resources management, and state-led institutions of river basin development can often be resistant to alterative views. Furthermore, much of what is analyzed by the methods we review are the transboundary water agreements, decisions, and declarations made by 'the state'" (Box 1.1, p.15). I will return to this point later in the review.

Having encouraged the reader to think creatively about water, chapters three (Pathways to Conflict Transformation) and four (Concepts and Tools), seek to broaden and deepen the analytical framework. Chapter five offers a critical appraisal of institutions, in particular international water law, while Chapter six presents case studies of the Mekong, Yarmouk and La Plata River Basins showcasing several of the many ways to apply the conflict transformation analytical approach. Chapter seven offers a short summary and reflection as to where water conflict analysts might most profitably go next.

The authors provide the reader/analyst with a well-appointed 'tool-box' including more than 30 figures (e.g. the TWINS matrix; the 'Benefits Wheel'; the 'Legal Assessment Model'), 18 guest vignettes among more than twenty 250 word or so boxes offering insights on concepts (the sovereign state, river-border complex, soft power), issues (quantifying groundwater use; destructive cooperation), cases (the tactics of non-hegemony) and places (the Nile, the Tigris-Euphrates, India and Nepal); and several extremely useful tables (e.g. 'Features of a model agreement'; 'Signatories to the UN Watercourses Convention in 2018').

This brings me back to the intended audience for this study. Having engaged in conflict resolution and negotiation for IWRM training of trainer exercises through organizations such as Cap-Net, Nile-Net, the UNDP and the OSCE over almost 20 years, I am highly sympathetic to this type of analysis. While most training of trainer courses focus on 'alternative dispute resolution', I often wonder about this approach’s utility especially in 'hard cases' such as the Nile, the Jordan and the Tigris-Euphrates where dominant actors prefer zero-sum games at worst, unequal 'benefit sharing' at best. Similarly, I wonder who inside the state will read this book. In the wake of World War II, Hans Morgenthau penned Politics Among Nations (1954), the classic Realist analysis of international politics that remains on the primary reading list of diplomats worldwide. Water, for Realists, is a resource central to state power. Were Morgenthau alive today, he would surely counsel capture and control. Indeed, the 'hydraulic mission' pursued by state decision makers and their economic and financial allies is emblematic of this abiding belief. For several decades, a wide variety of scholars and policy makers have tried to disrupt this perspective through the development of ideas and approaches described and discussed by the authors in this book. Concepts such as soil moisture and virtual water, and frameworks such as TWINS slowly seep into dominant discourse, but progress seems painfully slow, to me. What is to be done? My advice is to read this book and then donate it to a government department near you. And, if you ever find yourself in a diplomat’s office, perhaps you can slip it onto their bookshelf, preferably next to Politics Among Nations.