The biopolitics of water: Governance, scarcity and population (Hellberg, 2021) 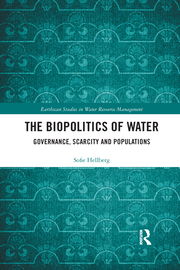 To cite this Review: Campbell, J. 2021. Review of "The biopolitics of water: Governance, scarcity and populations", Routledge, 2021, by Sophie Hellberg, http://www.water-alternatives.org/index.php/boh/item/239-biopolitics

Biopolitics is everywhere. It is a theoretical concept that is ubiquitous in critical water studies and accounts of (neo)liberal governance. The monumental influence of Foucault’s lectures at the Collège de France in 1978 and 1979 is demonstrated by the dozens of volumes on the topic that contribute to understandings of virtually every social phenomenon within every social science discipline. This is perhaps unsurprising given that, as Hellberg states, biopolitics concerns the ‘politics that governs individuals and populations in terms of their conditions of life’ (Foucault, 1998; Dean, 1999). This definition implicates myriad (or perhaps even infinite) ways that governments regulate the resources key to our biological functioning.

As a first-year research student interested in similar approaches to the study of water, I have spent a lot of time grappling with this slippery and pervasive concept. In The Biopolitics of Water, Hellberg attempts to define and then utilise an explicitly biopolitical approach that lays bare water infrastructures’ ways of creating different types of citizens, different classes of people and different forms of life. The book is at its best when the technocratic and democratic language of water policy is juxtaposed with testimonies from her research participants that are filled with the emotion, conflict and ambiguity that embodies everyday water access (pxiii). In the penultimate chapter (chapter 5) Hellberg achieves some of her goals by employing Agamben’s concepts of Bios and Zoë to explain the different types of citizens that are created by South African water policies. In spite of this, I left the text still wondering what separates a biopolitical approach from other critical social science approaches to water management that highlight unequal resource distribution and discriminatory state practices.

The first four chapters of the book offer an introduction to contemporary debates in water studies that will be familiar to readers of this journal including those around IWRM, Hydromentalities, and the Global Water Crisis as described by Gleick (1993). These chapters feel somewhat staid and overly familiar, recounting well known arguments and established topics. The participatory frameworks of Integrated Water Resources Management (IWRM) are argued to be a continuation of Gleick’s technocratic prescriptions for ‘knowing water better’ through engineering and hydrology without regard for the extractive practices these depoliticised scientific understandings uphold. Hellberg argues, notably, that international, standardised policy paradigms are incapable of understanding the complex, socially embedded power relations and economic practices that are fundamental to situated relationships between water and society. This results in an ‘implementation gap’ (Cook and Spay, 2010) and to the failure of ‘plans’ to actually work for the benefit of the environment and stakeholders (p. 68). The authors and argument cited are well-known but well-presented and provide a good (re)introduction to contemporary water governance debates that would be suited to students learning about IWRM, Water Security and Hydromentalities for the first time. These opening chapters felt comprehensive but standard in their depiction of the change from state-building hydraulic missions to economistic neoliberalism. As a result regular readers of this journal may find little new here than a good quality resource for students new to water politics.

Within these first four chapters biopolitics can get lost in the retelling of broader, more general debates within water studies. When biopolitics does take centre stage in chapter 2, the distinctive qualities of biopolitics are explained; how it has grown in influence in the 20th century as juridical and disciplinary power lost legitimacy, and states began to use ‘continuous regulatory and corrective mechanisms’ to govern decentralised, individualistic, capitalist societies (p. 23). Agamben’s (1998) perspective on biopolitics is the most compelling incarnation introduced by the author, and it is his ideas that are employed to illuminate the qualitative data collected about water users in urban and rural areas of eThekwini Municipality, South Africa. Agamben’s contribution is to show that regulatory governance systems create two distinct types of citizens: those who are given the resources for Zoë (from the Greek meaning bare life, mere existence) and those with access to Bios (a good, fulfilling life) (Hellberg, 2021, p30).

In the penultimate chapter (chapter 5) Agamben’s theoretical framework is used to analyse interviews with different water users in different communities in eThekwini. In this location the distinction between Bios and Zoë has clear parallels with government commitments to provide ‘basic water’ as a human right to all citizens while enabling the wealthy to pay for access to vast quantities of water and thus attain a higher form of life. The contrast is shown between those who worry about basic conditions for life and those who are ‘[allowed] to think about other things’ (p144); the realities of modern water infrastructures that monopolise water access and exclude the poor; the difference between those who relate water to pleasure, past times and privilege (p. 143), and those in informal settlements that need to create ‘illegal’ connections to circumvent water meters and avoid (greater) poverty (p. 32). One interviewee finds out from a houseworker that their property uses 100,000 litres of water a month to irrigate their garden and fill their swimming pool (p162). This user knows about the privileges that water access brings and the contrasting experience of those in the township of Crossmoor, but they continue to use excessive amounts of water. The interview extracts are well curated and expose the contradictions in neoliberal sustainable development policies where the moral responsibility of environmental protection is offloaded onto the individual, exclusionary practices prevail and the freedom to buy and consume takes priority over human rights, equality and ecological sustainability.

Reading this text has been of help to me, as it will be to other new students looking to be introduced to critical water studies debates. For those looking for a methodology with which to unpick interviews and participants’ experiences, ‘bionarratives’ might be a useful tool (see also Hellberg, 2014). The penultimate chapter focusing on eThekwini and discussed above was undoubtedly the highlight of the text as the experiences of water user’s lives came to the fore. Greater depth on the creation of difference between humans and non-human animals (mentioned in the introduction and covered somewhat in chapter 4) would have been appreciated. Greater depth on a normative alternative to neoliberal practices (hinted at in ‘(Beyond) Neoliberal Biopolitics’, p. 179) might have increased my appreciation of the text and biopolitics more generally. These are not easy questions to answer of course.

Perhaps because the grande idée of biopolitics has reached saturation point (Langer, 1942 as cited in Geertz, 1973, p. 3), because the first four chapter covers familiar ground in critical water studies, or perhaps because neat conclusions or policy recommendation are not the outcomes of this kind of work, I am left feeling slightly dissatisfied. Yes, ‘what makes life liveable is no idle question’ (Butler, 2004, p. 17), but what does biopolitics aim to do in the face of the obviously exclusionary and unsustainable practices it highlights? Perhaps that is for another text, or others to decide.