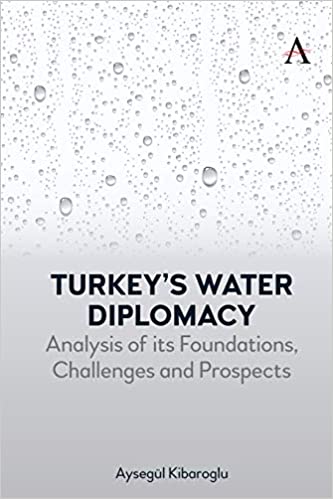 In the current tense political context of north-east Syria, Kurdish authorities regularly accuse Turkey of withholding water from the Euphrates. Recently, a coordination of NGOs in the region expressed concern about the low flow of the river since the end of January 2021, and when the UN Under-Secretary-General for Humanitarian Affairs highlighted the problematic situation last May, the Turkish Ministry of Foreign Affairs sent a statement to the UN, saying that Turkey was fulfilling its commitments[1]. This recent example is a further reminder of Turkey's poor reputation on the international stage regarding transboundary waters.

Ayşegül Kibaroğlu's new book focuses on the evolution of Turkey’s foreign policy and water diplomacy, in a very synthetic format (171 pages, bibliography and index included). It offers an explanation of Turkey's official position towards transboundary water management and international law. The research approach claims to be "qualitative and normative" and is based on an analysis of legal documents, memoranda of understanding, official reports, etc.

The author is specialised in water policy and international relations and it is clear that her work has benefited from a rich dialogue over time with actors of Turkish diplomacy, water bureaucracy and think-tanks such as the Hydropolitical Academy. On the other hand, and given the author's rich experience with the Euphrates-Tigris basin (as an advisor at the Regional Development Administration of the GAP[2] project and as a co-founder of a Track II initiative[3] ), I regretted that the analysis did not provide more details regarding the negotiation processes themselves or the dynamics at work alongside the official reports, or beyond the official discourse of Turkey with regard to international law.

The first three chapters detail the institutional setting and the guiding principles of Turkey’s water diplomacy. Chapter 1 presents the evolving role of the different state actors involved in transboundary water policy-making (Ministry of Foreign Affairs, water administrations, etc.). Chapter 2 presents the main principles adopted by Turkish water diplomacy circles (preference for technical collaborations and joint development projects to favour benefit-sharing rather than water flow sharing, reluctance to third party involvement for the mediation of transboundary water disputes, etc.). Chapter 3 traces the evolution of Turkey's position vis-à-vis international water law, including the reasons for its rejection of the UNWC convention (as a reminder, only Turkey, China and Burundi voted against it in 1997). There are many repetitions (sometimes almost word for word) throughout the introduction and these first three chapters, despite the short format of the book.

This first part of the book will certainly be of great benefit to students interested in diplomacy and international water law and, more generally, it offers a clear reading of the legal foundations mobilised by Turkey to justify its official position on transboundary water management. While the introduction briefly mentions the importance of Turkey's developmentalist perspectives at the national level (especially with regard to energy and irrigation) in shaping its water diplomacy, the role of the political and economic factors remains little explored in these three chapters[4].

The value of chapter 4 is to expose the bilateral relations of Turkey with other states in different transboundary basins (we can note the emphasis, in the titled of the chapter, placed on the ‘role of history and [physical] geography’, rather than on politics or economics). Evolution of international relations is described in each of the five cases studied, where the object of the disputes is either the guaranteed river flow (Euphrates-Tigris, Aras, Orontes), the sediment flow (Çoruh) or flood protection (Meriç). Following these successive rich descriptions, a synthetic cross-reading on Turkey’s foreign policy would have been very welcome. Finally, the fifth and last chapter offers an interesting perspective to decentring the reading by highlighting the role of non-state actors in Turkey's water diplomacy. The example of the Euphrates-Tigris Initiative for Cooperation (ETIC; a group of scholars and professionals from Turkey, Syria and Iraq that the author co-founded, and which organises training and research projects in the three countries) stresses the role of epistemic communities in water diplomacy and international relations. The book also mentions the role of some large NGOs and engineering associations in the production of knowledge on transboundary water management, but the discourse of critical voices remains little developed as such.

The book deals mainly with transboundary surface waters, but, after reading it, one would like to know more about the issue of transboundary aquifers too. Moreover, water diplomacy is not limited to the issue of transboundary waters, as shown by the examples given by A. Kibaroğlu on humanitarian aid that Turkey is trying to develop through water projects. As a result, I was surprised that the book did not address the case of the mega-infrastructure of the Turkey-Northern Cyprus water pipeline, which was recently analyzed in terms of 'hydraulic patronage' defined as the "systemic provision of water resources by a patron state to a client territory" (Mason, 2020).

Readers of Water Alternatives will not find in this book an engaged discussion of recent literature on the subject in political ecology or critical hydropolitics for example, or of currently debated analytical frameworks such as the framework of hydro-hegemony (FHH) (Menga, 2016; Conker and Hussein, 2020) – the word 'hegemon' appears once and the way in which some states benefit more than others from perpetuating a status quo is not explicitly addressed. As another example, the focus on diplomacy certainly makes sense when seeking a shift from conflict to cooperation potential, but the conflict-cooperation nexus (TWINS, Mirumachi, 2015) is not addressed at all, not even mentioned.

Engaging with these debate was probably not the aim of this book. Rather, the book added value is in tracing, in detail, the evolution of Turkey's official position and the various arguments it uses to justify it, and this will certainly be useful to a wide audience interested in geopolitics or international relations in the Middle East.

Conker, A., Hussein H. 2020. Hydropolitics and issue-linkage along the Orontes River Basin: An analysis of the Lebanon – Syria and Syria – Turkey hydropolitical relations. International Environmental Agreements: Politics, Law and Economics, 20 (1): 103–121.

[1] Turkey has been committed to delivering annually an average flow of 500 m3/s since the signing of a bilateral agreement with Syria in 1987.

[2] Güneydoğu Anadolu Projesi, or Southeastern Anatolia Project. This project targeted the construction of 22 dams and 19 power plants in the basins of the Euphrates and the Tigris.

[3] i.e. unofficial diplomacy, led by non-state agents (such as NGOs or universities) willing to avoid conflicts by improving the understanding of various points of view and thus communication between states.

[4] For instance, the Kurdish issue is quickly brought up to explain which security negotiations with Syria were key to the bilateral agreements signed by then Prime Minister Turgut Özal in 1987, but not to explain the very necessity of the GAP for the Turkish state as a means of internal territorial control (Akıncı et al., 2020).