Water, Technology and the Nation State (Menga and Swyngedouw, 2018) 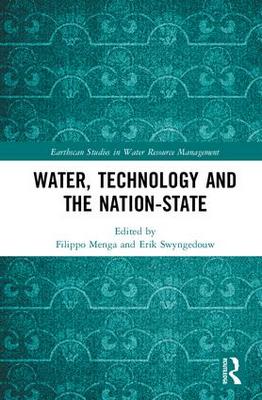 The nation state plays a privileged role in water management and hence is a central actor in all questions regarding processes of water allocation, water infrastructure construction, reform of water institutions, and regulation of water pollution. The collection put together by Menga and Swyngedouw presents historical and current cases of state-centred water politics. Half of the twelve case studies are from Asia; three from Europe, two from the African continent and only one, on the Colorado River, from the Americas. Apart from this obvious regional disparity, one gains the impression that important and diverse aspects of the theme have been covered; from irrigation development in Ethiopia and Thailand over water nationalism in Egypt; hydropower in Turkey and Nepal; large-scale dams in Cyprus and China; and transboundary water conflicts in Central Asia.

The collected volume is unified by a social constructivist perspective, as becomes apparent in the introductory chapter by Menga and Swyngedouw, entitled “States of Water”. Among scholars of water politics, social constructivism has emerged as the major counter-current to the conventional water scarcity narrative that dominates public discourses on water; a narrative often slipping into neo-Malthusian horror scenarios of “water wars” and drought-induced famines. Constructivist approaches understand waterscapes as socially produced by forces of economy, technology and science, and state-driven development ideology. Co-editor Erik Swyngedouw is certainly one of the leading proponents of this perspective, and his “Liquid Power” (2015) on the history of state-led water development in Spain is a seminal work. Taking their cues from a political ecology approach, Menga and Swyngedouw de-construct “nature” as space thoroughly shaped by human activities. They engage with the elusive character of water as both material and socially produced (pp.3-6), and point towards the dangers of environmental determinism privileging materiality over social relations in water management issues. Their solution is to shift scales throughout instances of research, mobilizing temporal, spatial and institutional scales in order to understand water management processes. The other two central terms, the nation state and technology, are treated in a similar vein. “The state” is seen as a non-essentialist network of power interest with claims over territory, and “nation” as a historically contingent social construct. The editors evoke Gramsci when theorizing the hegemonic approaches to water resource management by privatization, led by the World Bank, and contestation of these practices “from below” (pp.8-9). Technology, finally, is most obviously a product of human endeavours. As such, it is often presented as a utility for human prosperity, and also as a matter of national pride and identity. Large-scale dams, for instance, have a great emotive and symbolic dimension (p.6), as Menga and Swyngedouw rightly note. These first impressions of the introductory chapter set the tone: The matter of the collection is dealt with in a theoretically elaborate, highly complex manner. Yet the following chapters are much more concrete in their observations, and hence easier to digest.

The first case study already presents a highly interesting and relevant example of a “technological fix”, an attempt to solve social, or in this case even transnational conflicts by way of technology. Joe Williams discusses desalination as a proposed solution to contested water allocation on the Colorado River. Mexico (the lower riparian state) and the US (the upper riparian state) have argued over water quotas and use rights for almost a century; now the addition of desalinated water from the Pacific Ocean promises an end to the dispute. The chapter traces the history of desalination as a panacea hopeful from the era of high modernity in the early 1960s. It portrays desalination as a scalar fix used to depoliticize conflicts over water allocation along the Colorado River Basin; the high hopes invested in the technology have yet to be materialized. While the case study must be praised for its insight into the political function of desalination, I find it too short; it could have provided more connections to the water problem complex that shapes the arid west of the US.

One underlying theme that accompanies water management technology is the prospect of failure threatening every last stage of the planning and implementation process. One such example is the Rhône water transfer project, discussed by Gorostiza, March and Saurí in Chapter 3. The interesting point of this project, from a political perspective, is that it allows Catalonian nationalists to connect hydraulically beyond the Iberian peninsula and towards France, a proposal that – unsurprisingly – was very contested. At the moment, the authors conclude, the project doesn’t stand a chance of seeing implementation due to the political forces opposed to it.

Hanna and Allouche, in Chapter 6, also deal with what they call “water nationalism”, taking Egypt as a case study. The value of their contribution lies in the observation of a historical transformation of a water-centred nationalist ideology. This transformative change they describe as a shift from a modern, post-colonial and developmentalist to a neo-liberal water nationalism version linked to the notion of the “entrepreneurial state”.

Water management infrastructures are symbols of modernity and technological progress; hence their constructions are often entangled with modernist visions of statehood and technological progress. Linton and Delay, for instance, trace in Chapter 4 on the the Têt basin in the Eastern French Pyrénées how a centralized state produces “modern water” for irrigation, changing social relations in the process and dissolving local autonomy in decision-making on water management. Akbulut et al. (Chapter 7), Fantini et al. (Chapter 5) as well as Blake (chapter 12) and Meyskens (Chapter 13) discuss the role of large dams, hydro-power plants, and large irrigation schemes in the social construction of hegemonic, developmentalist statehood. The last chapter, by Covell F. Meyskens, opens up a specific perspective on Chinese environmental history. It narrates the efforts to build a dam in the Three Gorges region before the construction of the gigantic Three Gorges Dam, dating back to 1919. The project was first to be realized with the support of US engineering, than, after the end of the Chinese civil war, with the Soviets. Meyskens highlights an important deviation in this case: The voluntarist, bottom-up style of Maoist thought led to a discarding of foreign assistance and technocratic planning. Instead, the will of the masses should have been the main instrument in constructing the dam. This approach did not resort to much, let alone a dam being build.

Three chapters – Pyla’s and Phokaides’ work on Cyprus (Chapter 8), Dajani and Mason on the Golan Heights (Chapter 9), and Zinzani on the Central Asian Talas waterscape (Chapter 10) – center on contestation and conflict in water technologies and statehood. All three chapters manage to elucidate the complexity of conflict situations and their impacts on questions of water politics. Border contexts and military occupations shape water infrastructures, as these become part and parcel of securitized landscapes.

Altogether, the collection manages to extract an impressively broad spectrum of aspects of its guiding themes. My main problem with this collection is the abundance of jargon permeating the texts. The social-constructivist approach chosen by many authors invites a melange of Foucaultian, Gramscian and other post-structuralist or post-Marxist fragments. Despite the wealth of empirical knowledge that the book provides, the theoretical ambivalence is sometimes perplexing. A more straightforward or unified approach to the central concepts – Technology and the Nation State – would have been helpful. For example, contributors frequently invoke the work of Molle et al. (2009) and their concepts of hydrocracy and the hydraulic missions, but these concepts are never explained in detail, leaving those in the dark who are not acolytes of contemporary social constructivist water discourse. With such a rich fortune of empirical evidence at their hand to support them, the authors should have put more effort into convincing non-specialists of the merits of their theoretical approach. Otherwise, this highly interesting collection of case study appears to speak solely to those already familiar with the groundwork of social-constructivist perspectives on water.