Running out: In search of water on the high plains (Bessire, 2021) 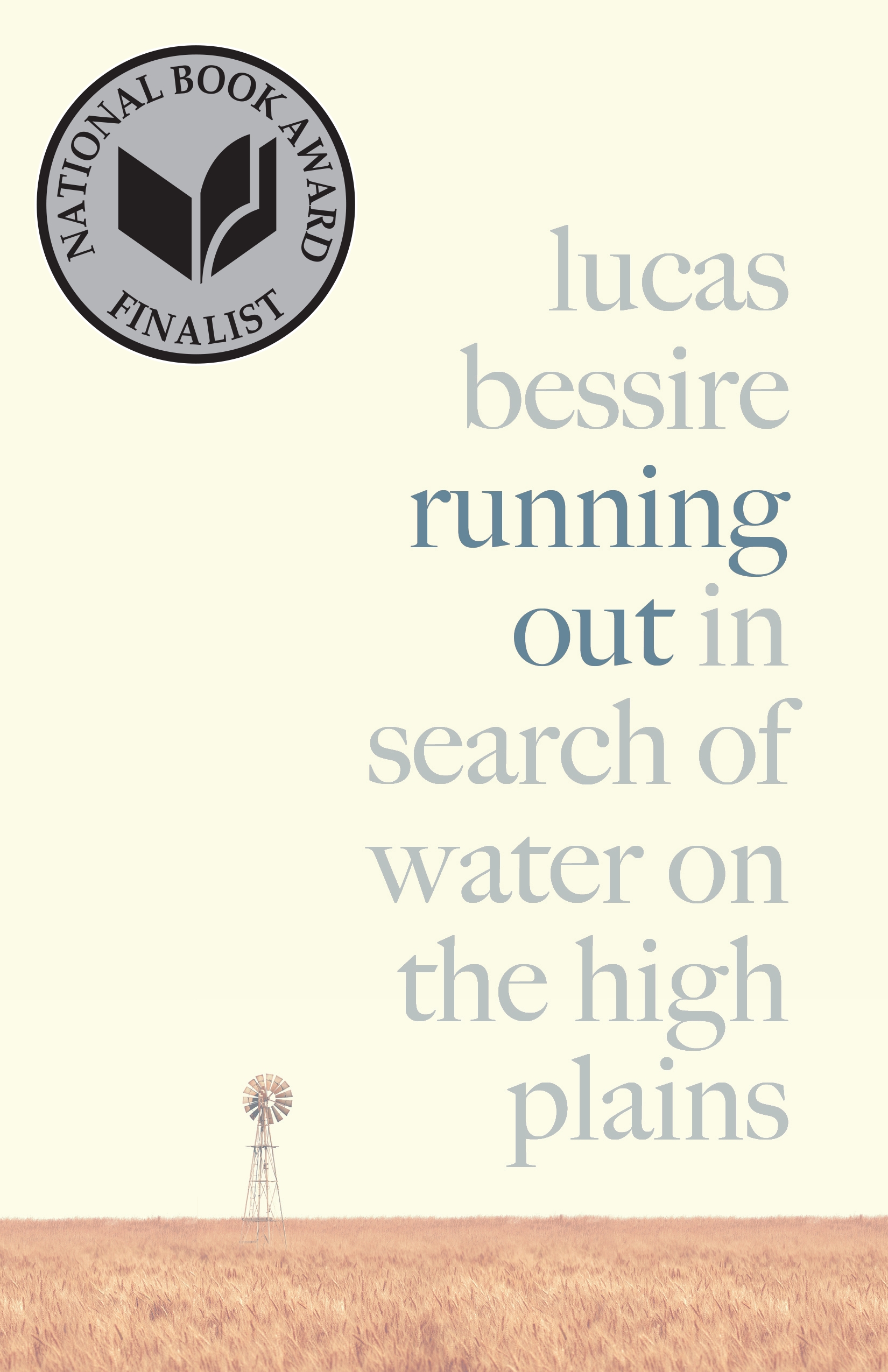 To cite this Review: Joshi, D. 2022. Running out: In search of water on the high plains, Princeton University Press 2022, by Lucas Bessire, Water Alternatives, http://www.water-alternatives.org/index.php/boh/item/287-bessire

Running out is an intriguing ethnographic tale of groundwater depletion. Set in the Ogallala aquifer region of South West Kansas, also known as the High Plains, the book unravels the multiple meanings of depletion and what it entails for aquifers, farming communities and state agencies involved in visualizing, accessing, managing and regulating groundwater. What singles this book from others (although I doubt there are other such texts on groundwater ethnography) is the effort made to weave an interesting web of settler colonial history, the paradigm of industrial agriculture and changing community relationships hence urging the reader to reflect and revisit their understanding of present-day groundwater issues in the Ogallala region. The book was one of the finalists for the National Book Awards 2021.

Through ethnographic fieldwork coupled with analysis of family and state archival records, the author, who is an associate professor of anthropology at the University of Oklahoma paints a canvas of Ogallala’s groundwater. The book is distinct in a sense that it documents the author’s family history in an attempt to trace the story of Ogallala’s groundwater. Three important personalities from his family shape this effort- his great grandfather RW, his grandmother Fern and his father. RW, in a way, embodies the settler colonial legacy of the landscape  paving and justifying industrial agriculture as a way of life in the plains. His grandmother and RW’s daughter, Lila Fern, on the other hand, seems like a curious and earnest ethnographer at heart on whose extensive notes the author relies the most to build the case for depleted elements of the plains- the springs, wildlife and way of living. The author’s stories of reconciling with his father, their relationship in a way, is an apt metaphor that tells the tale of the society aquifer relationships in the High Plains - one in need to be mended, but the complexity makes it difficult to find ways of doing so.

One of the most pressing themes that runs throughout the book is that of depletion. The author reflects on the meaning of depletion and in doing so he moves beyond a universal and singular conception of depletion that is often grasped through the idea of ‘falling water tables.’ In reflecting on why our current discourse on depletion is incomplete or imperfect, the author writes “Agribusiness myths reduce depletion to economic common sense, as simple as the bottom line. Whether pro-or anti-depletion, abashed or defiant, people often talk about aquifer loss in terms of markets, profit, and arithmetic. The trick is that such logics do not explain depletion but justify and perpetuate it”(p.7).

Depletion, according to him, manifests in loss of relationships, community trust, collective action and alternate ways of knowing and living. The most hard-hitting reflection on depletion is about the settler colonial legacy of the region that entailed a violent history of omitting not just the indigenous communities from the region but also the ways of living that rely on alternate forms of socio-natural relationships. The text is rich with various such examples, one that I would like to share here: ‘traditional Cheyenne believed that Plains waters were sustained by Mehne spirits. The horned serpents lived in the waters they guarded and were dangerous to humans unless they were appeased with offerings. Without the spirits, the waters dried up.’ (p. 131).

Various researchers have highlighted data and knowledge of aquifer settings as one of the important prerequisites for improving governance (Kulkarni et al., 2015; Varady et al., 2018). The Kansas Geological Survey (KGS), the agency whose work is discussed in this book, has a network of observation wells throughout the state as well as various tools to map and model aquifer and groundwater behavior (‘which is still an open question’- p. 57). For the author, however, ‘resource become’ through the work of scientists rather than exist a priori (Kinchy et al. 2018). Through his observations, the author questions the assumptions that scientific knowledge is objective and neutral. For example, the presence of KGS in local meetings was considered neutral by the GMD officials ‘because they were charged with presenting nonbiased information that had nothing to do with policy or politics’ (p. 57), which the author realized was not the case. Taken together, this highlights that modern groundwater knowledge asks us to universalize our understanding of the subterranean and in doing so change not only our perception but also the ontological basis of our relationship with the subterranean.

The Ogallala aquifer region has received great attention in recent decades owing to the strategies for managing the aquifer (Closas and Molle, 2018). The book sheds light on the inner workings of various institutional arrangements, most specifically the Groundwater Management Districts (GMD) - institutions devised for decentralizing aquifer governance to local districts. With increasing corporate investments in agricultural businesses, the region has seen a shift from ‘traditional’ farming community led agriculture to a more profit driven industrial enterprise. This has led to the ‘hijacking’ of institutional spaces (like the GMDs) that are supposed to work towards improving the groundwater situation in the region. The author for instance shows the exclusionary dimension of GMD as only landowners can become members of the GMDs, and that only those with more than 40 acres of land are entitled to membership. Through the book, the author points out that these are mostly corporate farming entities and ‘traditional’ (white) farmers in the region. Hispanic and other labourers, residents and townspeople are some of the stakeholders that the authors believe are left out of the aquifer governance structure making it ‘antidemocratic’ (p. 149).

Instead of an onus on improving conservation or reducing groundwater abstraction, the authors argue that local policy has predominantly focused on ‘managing depletion’ or ‘groundwater decline’ - a strategy that appears to be geared at maintaining the current ‘status quo’ through ‘planned abstraction’ and to prevent ‘economic collapse’ (p.109). In the context of such policies, technological interventions (like drip irrigation, sprinklers, digital monitors) are often considered to be game changers. Through examples, the author however cautions that such technological interventions may not necessarily reduce or address depletion but, on the contrary, may escalate it. Dwane, one of the farmers he spoke with, suggests ‘that the adoption of more-efficient technology needed to be coupled with collective action and reductions’ (p. 137).

Many texts and approaches on groundwater governance are overtly technical and prescriptive in nature (Closas and Villholth, 2019). This book is an important contribution to the growing work of scholars and practitioners across the world that aim to highlight the governance phenomena as ‘what it actually is’ rather than ‘what it should be’ to highlight governance as an intricately sociopolitical and continuously evolving process (Zwarteveen et al., 2017). In this regard, this is a highly recommended book for everyone who is interested in groundwater or is engaged in understanding groundwater issues in their region/area of work.

Ogallala aquifer system is one of the most widely studied groundwater system in the world but this book contributes to an entirely new dimension of understanding this aquifer (and the socio-politics of the water therein) by tracing the historical narrative of depletion through family history, community values, corporate interests, subsidy/incentive environment and state led management. It is an important contribution to the growing scholarly work in anthropology and cognate disciplines that urges the reader to reflect on the ontological and epistemic issues concerning groundwater. One of the glaring observations is that it is one of those rare books on groundwater that does not overwhelm the reader with statistical and abstract forms of understanding groundwater but impresses one by providing dense material of contradictions, perceptions, notions and positions of groundwater governance. As users, practitioners and researchers, we often find ourselves in the midst of such conversations and this book provides an interesting perspective on ways to make sense of such interactions.