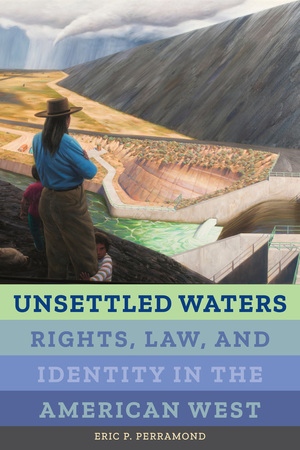 In parts of the western U.S., river basin water rights adjudications are something of a fact of life, or perhaps a necessary evil. On the surface, they are about inventorying water rights and water usage in order to then reconcile and resolve competing and overlapping claims so that everyone involved – water users, state agencies, courts, etc – has a common understanding of who has justified claims (according to the state, crucially) to what water, when, and in what volumes. As author Eric Perramond observes in the preface of Unsettled Waters: Rights, Law, and Identity in the American West, water rights adjudications are stupefyingly complex ways of answering very simple questions. They are both long-running and seemingly endless. There might be little reason to hope for a win-win resolution. Adjudications generate lifetime employment for lawyers but exact heavy tolls of finances, time, and mental and emotional stress from most everyone else involved. In theory at least, this is all worth it in order to achieve the goal of resolving all of the competing claims to the waters of a given basin, ostensibly fostering clarity about expectations, and in turn reducing the likelihood of future disputes, especially during shortages.

One can infer from the opening section of the book that Perramond would forgive us for thinking that based on a first glance, we have every reason to leave adjudication to the lawyers and go about our business. But, this book argues, there is actually a great deal worth learning from exploring the ways in which stream adjudications impact the lives of those caught up in them. Unsettled Waters seeks to show us the how, what, and why of the complex cultural, social, and political ramifications of adjudications in the state of New Mexico, with a strong emphasis on how it troubles identities and sovereignties among traditional and indigenous communities vis-à-vis the modern administrative state apparatus.

The stated focus of the book is to understand the lived experiences of people enmeshed in adjudications, especially members of acequias (irrigation ditch communities governed by Spanish colonial traditions pre-dating American statehood). Methodologically, Perramond self-applies the descriptor 'geographic ethnography'. Drawing on a rich body of evidence to illuminate multiple case studies in New Mexico, he triangulates between historical and legal archives; field observations from tours, walkalongs, and student field trips; and 274 interviews collected over the course of a decade, about three-fourths of which were with rural irrigators. Because Unsettled Waters eschews the relatively narrow lens of a legal scholar, we are led down a variety of interesting historical, geographic, and cultural pathways to arrive at a much richer, more engaging treatment of this otherwise dry topic than one might expect.

Following a context-setting introduction on the regional cultures of water sovereignty in New Mexico and the Southwest U.S., the book unfolds in three main sections. Exploring two major adjudication cases from northern New Mexico, the first section focuses on "how water adjudication works, what it does, and what happens when it fails". We learn in rich detail how the modern process of adjudication cannot paper over the "colonial present", the long-term cultural effects of multiple waves of colonization and dispossession in the region.

Perramond shows how determinations of sovereignty and water rights that are part and parcel of adjudication hinge on highly questionable, if not arbitrary determinations of 'Indian-ness' and community affiliations. These crude binary calculations are hugely impactful, the difference between whether one is part of the most powerful group in the watershed (typically the Indian tribal 'Pueblos') or least (usually non-tribal Hispano acequia communities) with respect to water right seniority and relative strength of claims. Interviewees’ accounts illustrate how the narrow sorting methods the state uses in adjudication trouble and jeopardize generations-old sharing arrangements between communities, none of whom ever understood water in terms of individual ownership and seniority, in stark contrast with the New Mexican state administrative apparatus.

Further, rather than being confined to the courts, adjudication means government workers show up to your neighborhood to literally look at how you use water. Community members accustomed to proportional sharing suddenly have every incentive to present themselves to the state as using their water to the maximum as individuals, and in so doing, dormant local disputes are revived, ancillary to the main event of the basin adjudication. Combined with a longstanding fear and loathing towards the state on the part of non-Anglo communities, one can easily begin to see the ways in which adjudication exacerbates tensions instead of resolving them.

The operating rules and techniques of adjudication and the social effects they generate can seem rather Kafka-esque, but the absurdity of it all is not inexplicable. Perramond, finds the roots of adjudication’s problematic outcomes in the colonial legacies of the region. His account does not pretend that questions of water rights and control of water are separable from questions of social identity and community, but rather foregrounds them and forces the reader to grapple with them.  The stakes are high; identities, livelihoods, and the economic futures of entire communities hang in the balance of adjudication results.

Part 2 of Unsettled Waters shifts the focus to what Perramond calls the 'adjudication-industrial complex' that emerges around adjudications. We meet the array of professionals assembled in order to generate the information required by the courts to settle competing claims: consulting historians paid to reconstruct from pieces of archival evidence the histories of water use by all kinds of users; state water agency field agents tasked with visiting acequia communities that are less than enthused about it; cartographers, lawyers… the money and labor seem endless.

Given that much of the labor demanded by adjudication is rather mundane, why show us this? Perramond wants to show the problematic role of technical expertise in disputes that are fundamentally social and political. The efforts of experts, however well-intentioned, cannot help but generate negative social externalities and unintended consequences. He writes: "[p]aradoxically, these attempts at quantifying water into some abstract, technical, objective data-based resource have resulted in a heightened sense of regional politics and local distrust over water. (…) New Mexicans pushed back against this form of abstraction, especially the very meaning of what water 'is' or 'is for' as defined by the state" (p. 122-23).

An important upshot of all of this, Perramond opines, is the development of civil society groups to support water-rich but cash-poor communities and the opening of new spaces for discussion, organization, and mobilization in relation to the state’s regional water planning process. He suggests it is the most important byproduct of the adjudication era.

Part 3 focuses on the question of "what next?" The importance of this question rests in large part on the high likelihood that the thorniest adjudications in the region have yet to even begin. We are led through brief case studies of the cities of Santa Fe and Albuquerque and looming water sustainability fiascos in the Middle and Lower Rio Grande River. Taking into account the issue of unquantified Indian water rights and the onset of climate change gives a sense of the gravity of the situation. By this point in the book, I could not help but wonder what a better way to go about all of this might be, while still realizing the key benefits of the adjudication process (especially the generation of large amounts of information that is legitimately valuable and useful).  Perramond does make some suggestions derived from durable acequia principles, such as shifting towards proportional sharing arrangements instead of priority. This recommendation is also broadly consistent with critiques of priority that are old even in Anglo American legal discourse [1] but which still bear repeating [2]. However, given the flaws he finds with both adjudication and non-adjudication settlements, I would have welcomed some further exposition on whether there might be any major procedural alternatives for addressing the basic problems that adjudication is meant to resolve, especially regarding the role of the state. This is a persistent question of broad relevance in over-allocated basins across the Western U.S.

Perramond is even-handed with the characters in his ethnography, neither romanticizing indigenous forms of water management, nor reducing the state to a caricatured villain. For example, while the New Mexico state water agency comes in for quite a bit of criticism, he is not unsympathetic to the agency technicians who must go into communities to conduct thankless, invasive data collection activities. At times, though, the higher managerial and political echelons of the state can seem fairly opaque and distant. Whether this was an editorial choice or, as I suspect, at least in part due to skittish public managers and officials resistant to being interviewed is not clear.

However, these are minor critiques that, for me, did not detract from the core mission of the book. Unsettled Waters will likely interest anyone wishing to explore contemporary indigenous and community-based water and natural resource governance, and anyone simply trying to rethink modern understandings of water management. Some topical and theoretical points of entry include: legal pluralism, legal geography and anthropology, indigenous and community-based natural resource management, a few strains of political ecology, and regional studies of cultural and environmental issues of the Southwestern U.S. Those looking for deep theoretical digressions on any of these topics may be somewhat disappointed, but that would be a misguided expectation that misses the purpose of this book.

This leads me to a few remarks on style and approach.  As the prodigious endnotes show, the analysis is built on a very solid intellectual foundation drawn from literature across multiple disciplines (I suspect it will appeal particularly to fans of the work of James Scott and Timothy Mitchell). But it is a blessedly accessible work of political ecology that seems appropriate for upper-level university students and graduate students. His goal of writing a public political ecology [3] with minimal jargon is applaudable because for all of its pathbreaking work in recent years, political ecology writ large still seems to struggle to cut through the mix of popular books dealing with environment and society issues. On that point, kudos are also in order for Julie Guthman, Jake Kosek, and Rebecca Lave, the editors of the series "Critical Environments: Nature, Science, and Politics" of which Unsettled Waters is the fifth volume.

Unsettled Waters is an engagingly-written, empirically rich, and helpful new signpost along a throughline of regional literature that can be traced back to the work of Helen Ingram and others in the 1980s [4]. Perramond has helpfully unpacked an arcane and inscrutable legal mess for non-lawyers and put a decidedly human face on it all by allowing the voices of the numerous individuals he met to come through. He shows that old frictions over competing ethical dimensions of water have not been flattened by water markets but instead are still very much alive in New Mexico. The juggernaut of water rights adjudication has, if anything, only added oxygen to previously smoldering tensions in a number of communities. As dry areas around the world stand on the precipice of major climatic change, that is a story that should be of interest to many Water Alternatives readers.