Split waters: The idea of water conflicts (Cortesi and Joy, 2021) 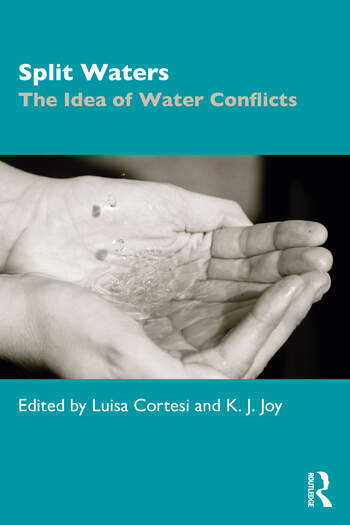 Split Waters collects diverse examples of water conflicts, each offering an understanding of the idea of conflict itself, in particular the power of framing and narration in establishing discursive - and material - control.  Co-editor Cortesi explains the initial puzzle that sparked the collection: the 'consistent imagery' of water conflict as a violent clash prompted by resource scarcity, taking place between two internally homogenous opposing groups (p. 1).  This observation prompts the book’s overarching project of interrogating this trope, expanding, "the social life of this normalized, homogenized idea of water conflict" (p. 3) and probing the consequences of this stereotype for both scholarship and activism.

Cortesi’s introduction makes a compelling case for the strength of an anthropological approach to this topic – the analysis of commonly held meanings, practices, and forms of communication through which social and political life is negotiated within and across cultural contexts and time frames. This book is intended as, "a collective theoretical contribution to the literature on water and environmental conflicts" (p. 8). Accordingly, it will be of interest to water scholars broadly, as well as those with an interest in thinking about water from Social Science perspectives, particularly those engaged with Development, Politics & International Relations as they relate to environment, sustainability, and climate/water justice.

The collection’s introduction sets up extensive theoretical background (via a tour through Platonic perceptions of 'reality', ontology and the history of ideas, including Nietzschean and Foucauldian concepts of genealogy and archeology - perhaps a surplus offering of theory for those who are eager to get started with the case studies). The theoretical set-up underpins a key preoccupation of this collection with battles for discursive control concerning water conflicts.

A small but significant criticism that arose in my reading of the book’s introduction is that of the curious caveat, contained within the footnotes, concerning the fact that "most citations in this (…) part of the introduction refer to European philosophers, more in reference to standard concepts used in the social sciences than to the politics of citation that it implies" (p. 22). The decision to frame the collection by focusing on canonical Western authors seems significant. Though this bias is footnoted, its implications not developed, and it seems an opportunity has been missed to critically consider how this publication in itself engages in a form of discourse-making, enacting an influence on how we interpret water conflict narratives via its 'citational politics'. This opens an invitation to further scholarship that engages this 'meta' level of analysis.

The collection’s ten chapters are drawn from varied geographical and cultural contexts including Bolivia, Colombia, Egypt, Ethiopia, India, Japan, the Netherlands, the UK, and the USA. The decision to divide the collection into three sections (Agential purchase of the idea of water conflict; Instrumentalisation of the idea of water conflict; Naturalisation of environmental, ecological, technological and historical relations) is understandable, given the theoretical agenda. However, by the editor’s own admission, "most chapters are examples of all the three phenomena" and as a reader I grappled with attempting to 'map' the chapters onto this structure. Given that organic linkages develop as a web between the contributions, it frequently felt confusing to try to force a categorization into one of the three sections. This is testament to the richness of the interconnections between the assembled chapters.

Themes that develop across the collection include multiple, competing narratives and the control of discourse (including public opinion and media narratives), expressions of power and framing of water issues, debates around large-scale infrastructure such as mega-dams, as well as wider issues of technology and development agendas, the Right to Water, accessibility of data and the flow of information, and religion, culture and worldviews.

Notable in the first section is Mabon and Kawabe’s chapter on a conflict arising from the Fukushima nuclear disaster in Japan, and subsequent attempts to promote public confidence in eating seafood from affected areas.  This is a different nature of conflict – methodological rather than teleological – in which the antagonism concerns central state narratives versus local attempts to pursue, "more transparent, if slower, process(es) of trust-building" (p. 10) by taking different approaches to demonstrating the low level of radiation risk. This chapter has a conceptual partner in Kroepsch’s engagement with the lack of publicly available data concerning water quantity demand for ‘fracking’ activities in the US state of Colorado. In an increasingly fraught water-energy nexus, public opinion, media narratives and data availability combine to influence pro or anti-fracking arguments.

Examples of the importance of competing and contested world views are found in several of the collection’s chapters. In Benaras/Varanasi, Lazzaretti explores religion and the symbolic power of water, using the example of the instrumentalisation of a sacred well site within Hindu nationalist narratives. The well is presented as a ‘minor water place’ which enables a nuanced, focused understanding of the political and religious currents reshaping the city. Meanwhile, Grandi engages with depictions of the Nile in Ethiopia and Egypt, and the implications for national attitudes to the Great Ethiopian Renaissance Dam (GERD).  Here, narratives both ancient and modern, in culture, religion and poetry, help make sense of attitudes and priorities concerning water, and by extension geopolitical wrangling over the contentious dam project.

Elsewhere, we find arguments that conflict can be productive (see Bowles’ example of London boat-dwellers and their mobilisation of media narratives to argue for their human right to water, in which fighting for the right to water binds a disparate social group together), and that its processes should be brought to light and fully engaged rather than downplayed (in Roth, Warner and Winnbust’s writing on community participation in the 'Room for the River' and 'Delta' paradigms for flood risk management in the Netherlands). Other chapters explore historical engagement with clashes of values, paradigms, and world-orders (eg. Bloodworth’s exploration of opposition to the Tocks Island dam in the US, in which seemingly ‘unstoppable’ development was successfully countered by growing environmental consciousness and associated legislation).

A highlight of the collection is the chapter on Bolivia (by now emblematic of water conflict) in which Bresnihan presents a discussion of the rights, responsibilities and relationships that emerge around infrastructure. This case study complicates the idea of water rights, as well as that of water conflict. Bresnihan argues that analytical attention to the practical care demonstrated through the creation – and maintenance – of infrastructure for clean water and sanitation at a community level, unlocks alternative understandings of feminist care ethics, as well as alternative engagements with the non-human that, "do not necessarily involve an ontological fluidity among humans, water, pipes, and the non-human beings that follow a restored ecology" (p. 18).

The collection’s conclusion, penned by co-editor Joy, emphasizes links between these case studies, the book’s overarching aim of expanding the theorization of water conflict, and the link between scholarship and activism that is so important to this topic. Joy argues that, whilst simplified narratives may be necessary for unity in activism, scholarly engagement with urgent social movements can be limited by the academic urge to apply labels (eg. framing an action as ‘Feminist’ or ‘Environmentalist’), noting the importance of critical interdisciplinary engagement for both scholarship and activism. This provides the laudable overarching ‘point’ of this publication – to open up "critical engagement with the idea of water conflict" and in so doing, to expand the, "canvas of conversation for and between academic researchers and activists" (p. 243).

This collection points to the ways in which our assumptions about water conflicts can limit our understanding of them. It counters the set of 'truisms' that often emerge in people’s engagement with – and statements on – water ('water is life', etc). As an attempt to move past analytically 'limiting' understandings of water and the conflicts that surround it, the book is extremely compelling. The collection successfully presents the argument that the idea of water conflict itself is political (ie. it can be instrumentalized and leveraged to various ends, as the collected examples demonstrate), and that it changes things – both in terms of practical 'on the ground' implications for the actors concerned, and in terms of how researchers study, understand, and explain events. This book gives the concept of water conflict a 'social life' in order to better understand what it does, and how.