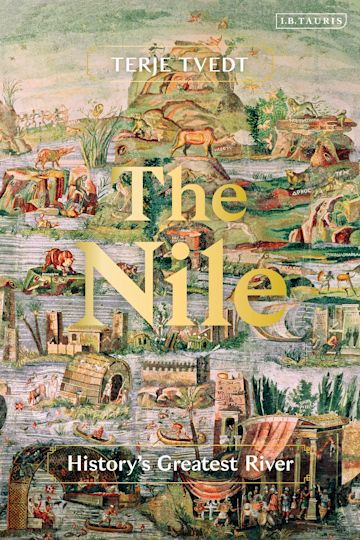 Terje Tvedt is a Norwegian historian and geographer who has spent most of his life studying water and notably rivers, around the world. This book testifies how the Nile holds a special place in his endeavour, and how, when it comes to the relation between water and society, the Nile has shaped human history, practices, and understanding beyond the physical borders of its basin.

The book is a biography of the Nile across space and time. The journey begins from the river delta in Egypt up to its multiple sources in Ethiopia, Uganda, Burundi and Rwanda. It spans from the construction of the first Egyptian infrastructures to control the Nile flood four thousand years ago, to that of the Grand Ethiopian Renaissance Dam initiated in 2011.

At the beginning of the book, Terje Tvedt reveals that in his journeys along the Nile he always carries a copy of “The History of Herodotus”. The ancient Greek historian and traveller seems more than a mere route companion. Tvedt follows his approach and methodology that combines archival research with travelling, observing landscapes and life, and talking to people. In doing so, Tvedt takes Herodotus iconic say “Egypt is the gift of the Nile” as a source of inspiration, turning it into a systematic analysis of the relations between the river’s hydrology, the institutions and infrastructures developed to govern its waters, and the political, cultural and symbolic meanings that people attach to it.

Throughout his journey along the Nile, Tvedt connects the big history of ancient kingdoms, colonial empires, revolutions, nationalist and modernist political projects, with individual stories of explorers, writers, engineers, entrepreneurs, singers, farmers... This includes curious anecdotes like a giraffe sailing downriver from Cairo up to Europe, or a pyramid built by a German explorer at the sources of the Nile in Burundi to recall how the river connects places that seem so afar. By highlighting water’s contribution in shaping human history and society, Tvedt brings new insights and perspectives to classic debates in historiography, like the strategy of European and particularly British colonialism in the region, or the discussion around Edward Said’s notion of Orientalism.

The book is relevant not only to better understand the past of the Nile basin countries, but also their future. A recurrent theme is the paradoxical relation between nature and society unfolding along the Nile. On the one side, humans have learned to master and manage the river by dint of infrastructures like dams, regulating floods and developing irrigation, and thus ensuring the flourishing of cultures and societies. On the other side, such processes have fundamentally altered the rivers’ ecology, resulting in ecosystems degradation that casts serious doubts on the sustainability - and ultimately the very survival - of that same societies. Such paradox shows how all the ingredients, dilemma, and challenges of what we call the Anthropocene are at play in the Nile basin and can be better understood when analysed against history’ longue durée.

As an Italian researcher who has been working on the Nile river in the past seven years, I found particularly intriguing the fact that Terje Tvedt journey on the Nile begins and ends in Italy: it starts by contemplating the Nile Mosaic in the archaeological museum of Palestrina, a small town not far from Rome, and it ends in front of Bernini’s Fountain of the Four Rivers, in the central Piazza Navona in Rome. Such choice tells the role of the Nile river in shaping cultural imaginaries around the world. It highlights the historical and geographical connections among the northern and southern shores of the Mediterranean and it recalls that the journey presented in this book is the journey of a European scholar. Terje Tvedt seems fully aware of this, for instance when he reflects on his positionality of Norwegian historian and geographer invited to explain the Nile to the very people who live on its banks, a task that demands “an extraordinary awareness on the position of the observer, of the outsider, because viewpoint determines how the river is depicted” (p. 24). Or when he reflects without prejudice on the contradictions of knowledge production by Europeans about the river and its civilisations, starting from Napoleon’s “Commission des Sciences and des Arts”, a scientific mission that brought new and important scientific insights on the Nile, being at the same time organic to a political project of conquest. Here again, critically reflecting on history can help contemporary scholars working on the Nile – both from within or outside the basin – to navigate the ethical and methodological dilemmas of producing scientific knowledge on a highly politicised and securitised river, where scientific data and information are more often sources of conflicts than instruments to manage them. Therefore, for foreign researchers travelling in any of the Nile basin countries, Terje Tvedt book can be a companion, guide and source of inspiration exactly as Herodotus has been for Tvedt himself. For researchers coming from Nile basin countries, I hope that this book will trigger the will to tell more and new stories, building on local sources, knowledge, languages, and archives, with the same curiosity, passion, erudition, and rigour shown by Tvedt in these pages.

Finally, the book is illustrated by beautiful and meaningful photos taken by the author himself. I would have appreciated more maps to help the reader familiarising with the national and local contexts of the different Nile countries analysed in each chapter. However, those interested in additional visual material on the Nile can always revert to Terje Tvedt YouTube channel, where among a rich collection of videos on the history of water they will find the three episodes of the documentary “The Nile Quest” that covers the same journey presented in this book: Herodotus 2.0 indeed!