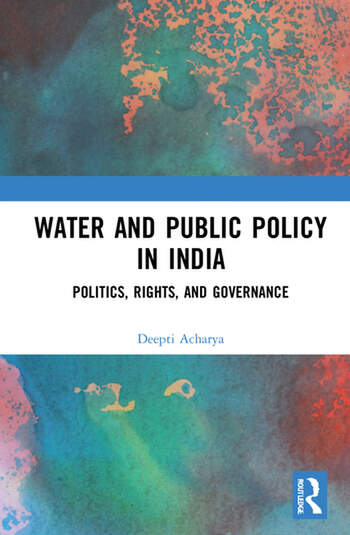 Given that various kinds of concerns around water continue to persist in spite of the voluminous writing on the subject, there is always space for new works on water. In this context, a book seeking to delineate anew the concept of right to water could be a welcome addition. Water and Public Policy in India: Politics, Rights, and Governance covers a lot of ground in its five chapters spanning 164 pages, from attempting to finding a basis for the right to water in political theory and in international discourses to giving a history of water governance in colonial and post-independence periods and coming up with a new framework to analyze the three national water policies adopted in India to date. There are also parts of the book that offer useful summaries by way of introduction to what are vast, complex areas. Thus the discussion in Chapter 3 brings out how the idea of right to water has evolved as an interactive process in India as a result of interventions by the state (which includes different levels and kinds of government bodies), the judiciary and civil society.

But the breadth of the book means that it often ends up covering terrain that has already been dealt with in existing literature without adding much that is new; at other times, it misses the possibility of making an additional contribution because of the cursory treatment of the topic under discussion. For instance, the quick survey of different political thinkers (in Chapter 2) ends by noting the importance of Locke to understand the modern conceptualization of the right to water, and particularly the manner in which his emphasis on labour then feeds into a discourse of efficiency. This is a point that can be developed and linked to a critique of liberal version of rights as well as to think through the general usefulness of a rights discourse. Similarly, in Chapter 3, there is a brief discussion of the right to water during colonial rule in India, where a narrative of state control over water bodies and maximization of profit is presented, along with the fact that there is some acknowledgment by the colonial state of the right to provide drinking water. But this does not capture the full story and many elements which have been widely discussed in the literature (e.g., in the works of David Mosse and Rohan D’Souza, among others) are missed out. Two such elements include the celebration of the power of science and technology to control nature and how this provided (and continues to provide) the impetus for many irrigation projects, and the caste hierarchies sometimes present in participatory systems of water management in the past such as kudimaramath and their modern-day variants.

A major part of the book (Chapter 4) focuses on the introduction and use of a ‘Water Policy Analysis Guiding Framework’ that is meant to analyze the three national water policies in India (of 1987, 2002, and 2012) in terms of appropriate benchmarks that a right to water should meet. Different distribution and management ‘strategies’(such as accessibility, affordability, prioritization of water uses, institutional arrangements, measures to ensure accountability, transparency, etc.) are laid out and the clauses relevant to that particular strategy are then tabulated and briefly discussed. While this exercise carefully focuses on the details of the policies, the conclusion drawn in each case (presented in the form of thirteen claims) seems foregone, especially given the amount of work that the 1987 and 2002 policies have already attracted and the kind of in-depth analysis that many of the individual elements mentioned have seen. More importantly, the conceptual distinction between a policy and actual programmes and projects undertaken to meet different water-related goals is not made; further the programmes and schemes carried out under different five-year plans – and through whose implementation the different dimensions of a right to water would become evident – are merely mentioned in Chapter 3 without any critical discussion. In a similar vein, the distinction between policy and laws (e.g., in terms of legal status) is not highlighted, so that a casual reader could overestimate the importance of the policy documents and their actual impact. This is particularly glaring in a book that seeks to give centrality to questions of public policy and governance.

In discussions on water today, concepts such as rights, commons, decentralization, sustainability, neoliberalism are commonly used, often from varying theoretical and/or ideological standpoints. Hence attention needs to be paid to clarity about their meaning and implications as well as possible tensions and contradictions that may result. For instance, ‘commons’ may be used to represent a particular normative position or stand for a particular form of property. Decentralization in the Indian context would also require a discussion of elite capture of local bodies such as panchayats as well as be situated in a politics of federalism. Similarly, the state’s role in the last two decades with regard to water and other kinds of natural resources has raised fundamental questions about what the idea of public trusteeship means. Needless to say, no single book can deal with all aspects, but that is precisely why the book would have been better off focusing on a shorter period or on particular elements in greater depth.