Water security for Palestinians and Israelis: Towards a new cooperation in Middle East... (Ward, Ruckstuhl, Learmont, 2022) 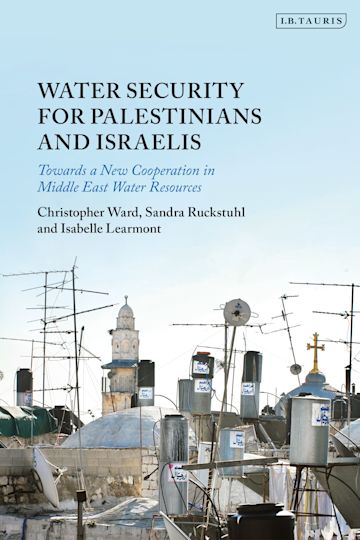 To cite this Review: Brooks, D.B. 2022. Review of "Water security for Palestinians and Israelis: Towards a new cooperation in Middle East water resources, I.B. Tauris 2022, by C. Ward, S. Ruckstuhl and I. Learmont, Water Alternatives, http://www.water-alternatives.org/index.php/boh/item/297-coda

It is hard to think of better authors for a book comparing water security in Palestine and Israel than Christopher Ward, Sandra Ruckstuhl, and Isabelle Learmont. The first two authors have published widely on water issues and climate change, and all three have on-the-ground experience in the Middle East.  Even though the focus of their book is on the inequity of water for Palestinians, the description of water management for Israelis is treated extensively and even with some admiration.  Few other books dealing with the Israeli-Palestinian conflict can claim the same lack of bias.

The Introduction to the book begins with the “nature of water security,” a well-explored subject in the past decade. Rather than proposing one all-encompassing definition of water security, the authors put forward three key elements (later called “working definitions”), Water Resources, Water Services, and Risk, along with an easy-to-read figure showing what constitutes each element.

Before turning to focus on Part Three, I must express my concern with the 140 pages long Part II.  True, it is comprehensive, and the book will be cited for its extensive coverage of the ways in which Palestinians have been deprived of each element of water security. But why is that extensive treatment needed? With minor exceptions, any literature review will show that the Palestinians have been deprived of water, and, to compound their problems, have struggled with ways to cope with Palestine’s traditional, decentralized water management.

That access to a basic water requirement is a fundamental human right has long been recognized (e.g., Gleick, 1998, United Nation, 2010) even if not observed in Palestine.  Admittedly, these statements are “soft law,” but they are supported by the United Nation’s Watercourses Convention, which “is an international treaty with binding effect” (Salman, 2014). Further, there is no shortage of documents that propose to reverse that inequity. One way or another, they recognize that water cannot be divided up as if it were land. Rather, it must be treated as a flow that at one location provides domestic water for an Israeli community and, at another, provides irrigation for Palestinian farmers, and so on until it flows into the sea, evaporates, or is lost in a deep aquifer. Except in uncommon situations that rarely apply in the near Middle East, there is no absolute sovereignty over water!

Many articles provide specific application to the transboundary water shared by Israel and Palestine. Brooks and Trottier published a draft water agreement (Brooks and Trottier, 2012). Zeitoun and Warner show that “hydro-hegemony” is a key source of the inequity faced by Palestine (Zeitoun and Warner, 2006) and Trottier and Perrier show that displacing traditional irrigation practices harms Palestinian farmers more than it helps (Trottier and Perrier, 2018). With a different approach, Nada Majdalani, Palestinian Co-Director of EcoPeace Middle East--a unique non-governmental organization with three directors, one each for Palestine, Jordan, and Israel—presented the deepening water crisis in occupied Palestinian territory and the inequity of its supply before the United Nation’s Security Council in 2019 (https://press.un.org/en/2019/sc13794.doc.htm).

In short, the case for the inequity of water use in Palestine is well established. However, as the three authors of this book emphasize, it won’t be easy to overcome the existing inequity. As the authors state, “Despite good ideas and intentions, the Palestinian institutional structure is caught in a double bind of unavoidably poor performance and imposed limits on knowledge and planning” (p. 205).

It is a relief to get to Part Three of the book, which admirably seeks, “to strengthen Palestinian water security while protecting that of Israel,” (p. 209) and then sets up the challenge, “Despite fearsome constraints on both sides, there are possibilities that a ‘new deal’ on water could in fact achieve this goal” (p. 209). Chapter 7 provides a review of the current situation and of what has been stalling progress; Chapter 8 asks about the incentive each side needs to make changes to the status quo; and Chapter 9 looks at ways to cut “the Gordian knot.” If Chapter 7 ends with many discouraging prospects, Chapter 8, in contrast, finds at least as many that are encouraging, and suggests that they have been increasing of late. Chapter 9 therefore takes on the goal to cut the Gordian knot even as the authors know that reality presents numerous knots.  Therefore, the chapter goes about proposing ways to untie them in both the West Bank and the Gaza Strip. Individual proposals may, or may not, achieve small gains, but collectively they would achieve Palestinian water security.

The book concludes with a short “Coda” that reviews what we have learned about water security. It is worth reading for its own value. Beginning from their three-fold “working definition,” the authors distinguish between local water security and national water security. The former is, “the bread and butter of water management, and need no further comment from us” (p. 265). On the other hand, “it is at the national level and on water scarcity that we have discussed in this third part of the book”.  This is an important distinction.  I would only suggest some caution as to how Israeli data defines “national”. Does it, for example, include water used in Israeli settlements?

The Coda goes on to cover some issues that were absent from earlier chapters (with the partial exception of Chapter 9). For example, it mentions the “water-energy nexus” that would use the abundant space for collecting solar power in Jordan to become the renewable replacement for natural gas that currently fuels the Israeli desalination plants. It also refers to the “Green Blue Deal” (incorrectly given in the book as the “Green Deal”) that was proposed by EcoPeace and that has won the support of all three of its members: Palestine, Jordan, and Israel (Bromberg et al., 2020). The Coda puts a distinctly hopeful perspective on the application of water security to both Israel and Palestine. Israel is of course already water secure, and the Coda ends with the words, “So could the Palestinians, provided, of course, that all the conditions of investment, efficiencies and good governance were fulfilled”. Certainly, those conditions are essential, but I would rather that the Coda had added the political conditions that Israel withdraw from the West Bank and eliminate Israeli settlements in Palestine.