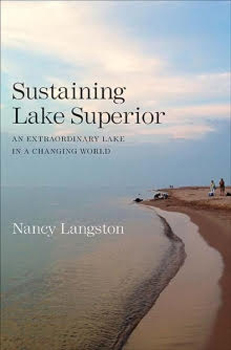 Lake Superior, by surface area, is the largest lake in the world. It has the further distinction of having largely recovered from pollution from pulp and paper mills, and from iron mining. While still threatened, it is cleaner today than it was fifty years ago. Were that not sufficient reason to read this book about Lake Superior there is the further incentive of observing the water and environmental history performed at its finest.

First, what is the book about? While it traces the ecological history of the lake over more than a billion years, its close examination of Lake Superior starts in the middle of the nineteenth century. By that time trapping had largely exterminated beaver and erased their contribution to the assimilative capacity of water in the basin. The fur trade was diminishing, and turning into fisheries trade; forests were on the verge of being logged to build Chicago; and mining was accelerating. Mining and deforestation were closely related because mines created markets for timber. Settlers moved onto cut-over lands, and, in an attempt to farm, increased the siltation of the lake. Adding to these problems, the pulp and paper mills became the engines of the economic development in the region. Effluents, some of which were toxic, killed large numbers of fish. In the boom years following World War II, arsenic and DDT were employed to kill algae, mosquitoes and other aquatic nuisances with clear negative effects on fisheries, birds and wildlife. In 1947 the Reserve Mining Company began mining taconite – a low-value iron ore that required a complex production process involving much waste, some very toxic.

The Clean Water Act and the Great Lakes Water Quality Agreement legislated in the 1970s initiated an era of what is widely, but superficially, regarded as a miracle of conservation recovery. Native lake trout and the wildlife that eat them have returned. But legacy pollutants still lurk in lake sediments; wind and rain bring atmospheric contaminants; and climate change threatens to generate new and renewed problems.

Second, how does the historical approach to Lake Superior elucidate our understanding of water? Langston is an excellent storyteller. Her fine writing weaves together heroes, villains and the twists and turns of plots and subplots, as well as a personal narrative of living on the lake, into a compelling account that water resources scientists and social scientists seldom deliver. The historical method reveals relationships among living and non-living things and the multiple feedback loops through which each affects the other. She is particularly attentive to environmental ethics and the plight of native peoples. In covering nearly two centuries, she demonstrates how the past refused to stay the past, and decisions made decades ago, many ill advised and poorly informed, resurface as nagging problems. She also illustrates how long it takes to make headway on environmental problems, and how they are less resolved than replaced by new ones.

The historical account in this book reminds water scholars of truths they know but do not always acknowledge. Water cannot be separated from its setting, and trees, wildlife, people, minerals and climate are intimately connected to it. It is dangerous for scientists and practitioners to get carried away with their models and doctrines. The previous notion that dilution was the solution to pollution failed to recognise the limits of water’s assimilative capacity and the bioconcentration of some contaminants in the food chain. Another lesson is that effective remedial efforts against pollution require the crossing of boundaries. In the case of cleaning up toxic sites in Lake Superior it was the efforts of local groups alongside national and international bodies that saw some success. The crossing of disciplinary boundaries was critical, and by crossing species boundaries, biologists began to understand that wildlife could be sentinels for potential harm to human health.