The human rights to water and sanitation (Heller, 2022) 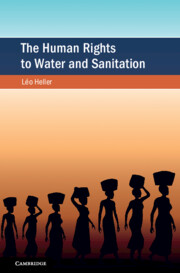 To cite this review: Loftus, A. 2022. The human rights to water and sanitation. Cambridge University Press 2022, by L. Heller, http://www.water-alternatives.org/index.php/boh/item/300-HRWS.

Achieving the human rights to drinking water and sanitation (HRtWS) has huge consequences for billions of people’s lives around the world. Researching those rights therefore sheds light on an array of crucial processes and relationships. It is a lens on some of the most important issues confronting humanity. Léo Heller’s book, The Human Rights to Water and Sanitation, is both a brilliant synopsis of scholarly debates and a powerful tool through which scholars, policymakers and activists might invest human rights with greater meaning.

Between 2014 and 2020, Heller served as the UN Special Rapporteur on the Human Rights to Water and Sanitation. In the role, he gained huge respect for his careful reporting on a variety of different aspects of the HRtWS. These reports form the basis for much of the monograph, which is divided into four main parts: the background to the HRtWS; the drivers (and obstacles) to those rights; specific policies targeted at ensuring their achievement; and three chapters on specific social groups. Newer material is presented in the first section where a superb introduction to the human rights framework is presented alongside its historical antecedents and future directions. The section then goes on to provide a more specific introduction to the human rights to water and sanitation. Crucial moments in achieving these rights came in 2002 and 2010, with the latter marking the year in which the UN General Assembly fully recognised the right to water.

Chapter 3 then turns to some of the controversies surrounding the right to water. While he gives short shrift to shallow critiques of human rights frameworks, Heller devotes far more space to contemplating debates around: whether individual rights are prioritised over collective rights; the role of the state; and whether a third generation of rights, implying the rights of water, might also be included within the existing framework. For many academic readers, this chapter will provide some of the most engaging material. Heller presents these contentious debates with characteristic balance, yet always with an eye to normative frameworks that will achieve greater justice and fairness.

Subsequent sections provide further sustenance for academic debates while also providing something of a toolkit for policy makers. Most of these chapters previously formed the basis of Heller’s reports in his role as Special Rapporteur. Data was gathered for these reports through expert consultations, surveys, questionnaires, field visits and a rigorous review of existing sources. It is perhaps no surprise that the monograph represents the single most carefully researched manuscript on the human rights to water and sanitation published to date. If the chapters on drivers and policies will prove important resources for many practitioners, equally important are the chapters on “People” in which Heller turns to social groups that may be particularly affected by the achievement – or the failure to achieve – the HRtWS, including women, forcibly displaced persons and those whose spheres of life lie beyond the household. In turning to “spheres of life beyond the household”, Heller focuses attention on those who are so often neglected in discussions around household water provision: prisoners, the homeless, and, indeed, most of us who will at some point need to use a public toilet. The book concludes with a helpful summary of future areas to be investigated.

As should be evident from this review, Heller’s mode of researching is both rigorous and precise. The monograph draws from an extensive process of data gathering and a deeply consultative engagement with all sides of the many debates. It therefore seems a grave irony that Heller’s last days in office as UN Special Rapporteur involved defending himself against unfounded attacks from the main body representing private sector water providers, Aquafed. Heller’s final report focused on the question of whether the private sector helps or hinders the achievement of the HRtWS. Previous responses, including those of UN agencies could be summarised as pro-private sector, anti-private sector or agnostic. While his predecessor had largely been agnostic, Heller – in a phrase that captures his approach (and that of the book) more broadly – states that “the processes underlying water and sanitation service provisions are not neutral and are shaped by the social, political and economic environment in which human rights are realized” (p119). Focusing on these underlying processes, Heller argues that neutrality or agnosticism should not be an option: indeed, privatization is a clear risk to the HRtWS. Aquafed was incensed by such a finding and sought to trash both the report and Heller’s credentials. Civil society groups responded with a public letter signed by over 150 different organisations in October 2020 supporting Heller and condemning Aquafed’s attacks. A detailed insider view of these events is presented in Chapter 4, which serves as a reminder that, while the dust may now have settled, speaking truth to power is not an easy process. It also serves as a reminder that achieving the HRtWS will involve challenging existing relations of power and presenting real alternatives to the status quo.

Overall, this is an outstanding book, one that is a brilliant testament to Heller’s care and commitment as UN Special Rapporteur on the HRtWS. It deserves to be read widely and, perhaps more importantly, to be used in achieving the very ideals that are laid out so clearly within.