The settler sea: California’s Salton Sea and the consequences of colonialism (Voyles, 2021) 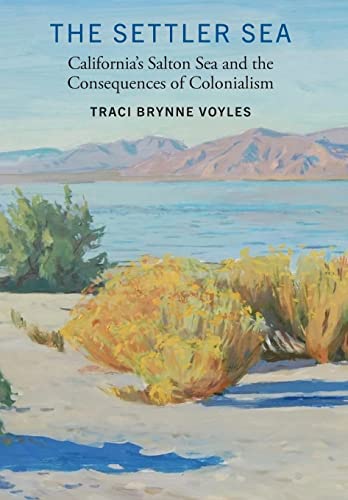 To cite this Review: Bernat, R. F.A. 2022. Review of "The Settler Sea: California’s Salton Sea and the Consequences of Colonialism", University of Nebraska Press, by T.B. Voyles, Water Alternatives, http://www.water-alternatives.org/index.php/boh/item/302-voyles

Cahuilla, Cocopah, Quechan, Chemehuevi, Kumeyaay, Southern Paiute … Native Nations in the United States (U.S.) have long been associated with good environmental stewardship. By describing part of California’s history, Dr. Traci Brynne Voyles’ 2021 book, The Settler Sea – California’s Salton Sea and the Consequences of Colonialism unpacks the intersections of race, coloniality, as well as land and water management to reveal a striking portrait of Native attachment and unconditional dedication to their land. Dr. Voyles is a Professor at the University of Oklahoma and Chair of the Women’s and Gender Studies Department.

With the Salton Sea at the center of the development of new energy and water policies in the United States, this book will inform many on a sometimes overlooked and tumultuous California history. For example, after years of oil, mineral, salt, and water exploitation and privatization, the years of lithium harvesting in the Salton Sea have come to satisfy the demand for electric car batteries. More recently, the State of California has been using the restoration of the Salton Sea as a bargaining chip with the U.S. Bureau of Reclamation before agreeing to cut down its use of the Colorado River. What course these developments will take remains unknown, but Dr. Voyles provides a valuable and salient historical account of what has led to the present moment.

This book is organized chronologically, and each chapter is named after the following themes: desert, flood, birds, concrete, bodies, bombs, chains, and toxins. From Chapter 1 to Chapter 8, the author takes the reader through centuries of racist California policies describing how they mingled with water and wildlife. The story depicted in the book is one of xenophobia, indigenous appropriation, and environmental injustice.

Unlike the settlers that "came and went" (p. 47) to harvest gold, silver, then lead, and develop agricultural businesses, the dedication of the indigenous community to their ancestral land goes beyond settler and non-Native comprehension. In Chapter 1 “Desert,” the author explains that Native Nations have learned to adapt to the unpredictable nature of their environment. Despite centuries of pollution, mistreatment, and social injustices, as well as land and resources dispossession, the Salton Sea remains a sacred area for indigenous communities, Dr. Voyles argues.

In addition to indigenous communities, the author also depicts racism directed toward many people of color. Dr. Voyles describes in detail the development of an agricultural caste system with cheap labor constituted out of Native American, Mexican, Black, Chinese, Indian and Korean peoples, including the disproportionate incarceration of indigenous people forced to work. In Chapter 4 "Concrete," the author demonstrates how the lack of infrastructure opportunities on reservations led to the loss of Indian water rights, forcing Native Americans to become dryland farmers. This chapter also expands to the topic of land development in the Colorado River Basin at large.

Dr. Voyles discusses many double standards in her book, which are instructive to contemporary dynamics as well. When, in Chapter 3 “Birds,” white settlers created gun groups dedicated to killing birds that ate their crops, state law made it illegal for Native people to own firearms. Additionally, Chapter 7 “Chains”, depicts the perfidy behind the development of infrastructure. White settlers not only forced Natives to build jails on their lands to imprison their people, but they also created a system of "legalized slavery" (p. 225), making them (as well as Mexicans, Blacks, and Asians) build infrastructure for free, on their land, for the use of profit by settlers.

The story of the Salton Sea is also one of environmental degradation. In Chapter 2 “Flood,” the author presents the man-made formation of the body of water called the Salton Sea today. In Chapter 8 “Toxins,” the author discusses the habit of "blaming environmental ruin" on people of color (p.250) by explaining that the spread of Typhoid was wrongly associated with the groundwater quality of the Cahuilla people, or with livestock excrement flowing from Mexico. In Chapter 6 "Bombs," the author explains that the degradation of water quality of the Salton Sea has primarily been due to non-point source pollution coming from the Imperial Valley, as well as military activities. Many pollutants have been dumped into the Salton Sea: kitchen waste, car batteries, vehicle engines, airplane parts, ammunition, heavy metals, and motor oil. The author also touches on the disposal of nuclear wastes into the Salton Sea. Such events became the subject of fictionalized tales of radioactive monsters, although Dr. Voyles misleads the reader – for she does not provide references – to think they really existed.

Finally, one way the author does exceedingly well is to show the dichotomous dimensions of the air quality question in the Salton Sea. People of color, as cheap farm labor, have been in constant contact with harmful chemicals. At the same time, in Chapter 5 “Bodies,” tourists would recover in the Salton Sea area because of its healthy healing climatic conditions. Nevertheless, the Lake's water evaporation has reduced the air quality over time, which has negative consequences for people living there nowadays.

Dr. Voyles’ reconstitution of all this history of welcome and this book will serve as a useful entry point for non-academic audiences interested in the specifics of the Salton Sea, but also for scholars and policymakers wishing to engage with the important themes she articulates.