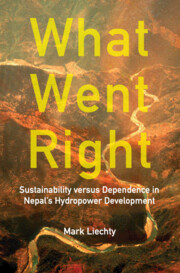 First, a full disclosure. The author had asked me if such a book was worth writing and had sent me an early draft for review and comments. I replied that it must be written as this story of an alternative development paradigm has important lessons for the Global South but has never been properly told. Later, the publisher too sent me the final draft for review and, seeing my full endorsement, asked me to write a back cover blurb. Moreover, the author quotes extensively from the book I co-edited (Gyawali, Thompson and Verweij, 2017) on Nepal’s good and bad developments. Hence, I would hardly qualify as a distanced independent reviewer. This review, therefore, after summarizing the main events and arguments presented by the author, looks at this book by a Northern author through the eyes of a Southern academic activist, both its strengths and weaknesses, fills in critical missing events, and attempts an alternative explanation of what ultimately went wrong with this noble effort.

This book is the story of an alternative pathway to develop Nepal’s hydropower resources, the development philosophy and people behind it, as well as its ups and downs against the backdrop of Nepal’s turbulent political upheavals. It is based around the decades of struggle by a Norwegian electrical engineer, Odd Hoftun who arrived in the country in the mid-1960s as a Christian missionary as part of what is called the United Mission to Nepal (UMN). Nepal had remained an isolated kingdom for a century till 1951, ruled by a dynasty of powerful hereditary prime ministers akin the Japanese Shoguns who maintained excellent relations with the British ruling India to the south. The departure of the British undercut their power base and led to a “Meiji restoration” style comeback for the monarchy. Interestingly, it was this Hindu monarchy that allowed Christian missionaries to establish themselves in Nepal under the condition that they do good Christian development but refrain from proselytizing or converting people to Christianity. Thus, were established some of Nepal’s best English schools and modern hospitals, the former run by Jesuits and the latter by mainly Protestant UMN, as examples of health and education being not private but public and even common pool goods belonging to society at large.

Odd Hoftun was an oddity because he came to work in Nepal not via health or education but through hard engineering, an enterprise that produces mostly private and sometimes public goods (infrastructure) but rarely common pool goods based on moral volunteerism. Perhaps intuitively aware of this limitation of his profession, the higher callings of UMN, and his own Scandinavian and Hanseatic League history of the success of market mechanism, Hoftun went about with literally missionary zeal to prove the value of “ethical capitalism” to Nepal. In trying to transfer a Scandinavian corporate culture to a country where this was a novelty, he was the primary catalyst that established Butwal Power Company (BPC) as well as allied supporting entities such as a mechanical workshop (which as Nepal Hydro & Electric is today one of the most professionally advanced in the country) as well as a vocational training school, construction company and engineering consultancy services.

The importance of this Hoftun vision is the realization that technology is not a standalone black box but comes with, and indeed needs, a large and diverse supporting infrastructure both hard and soft. This is what a philosopher of technology calls structural depth, domain diversity and deep craft (Arthur, 2009). A hydropower station no matter how small, as many experiences amply indicate, cannot just be built and left to function with an instruction manual to a new owner. There must be supporting services in a range of sub-disciplines from civil, mechanical, electronic and many other types of engineering, to say nothing of social disciplines of management, law, accounting etc. And these must have a large collegium of practitioners supporting each other as they solve everyday problems. The nobly motivated (to solve the climate change problem) but rather misguided efforts of the international development community in partnership with Nepal’s energy agencies to promote (hydro) electric cooking to replace imported fossil LPG is a telling case in point. The subsidized or even freely distributed induction and infrared cookers are either unused or become electronic junk quite fast in rural Nepal!

Hoftun’s over four decades of alternative hydro missionary work in Nepal can be broadly divided into two phases: the first under what is called the Panchayat system of active monarchy till 1990, and the second after the restoration of multiparty Westminster model democracy and the now failed Maoist insurgency against that parliamentary system. Ironically, it saw seminal success during the former and rather sad disappointments in the latter phase, including the bombing of its flagship Jhimruk power plant. And even more ironically, the Hoftun model and vision was rejected during the second phase by his own mother country Norway ignoring this more sustainable capacity-building approach in favour of the Washington Consensus-led predatory privatization favouring foreign investment.

Liechty describes this euphoria-depression in detail, showing Hoftun’s at times heroic and at other times quixotic attempts to fight the larger forces arrayed against his vision, both Nepali and foreign. Innovations such as what Hoftun attempted must stand on three legs: technical innovations which, as Hoftun accurately surmised, are best birthed by nimble profit-seeking market; but also managerial innovations of state hierarchism and behavioural innovations backed by the moral volunteerism of egalitarian community values (Gyawali, 2021). In the Scandinavian case, all three legs co-evolved over a long historical period with both strife and compromises by the business class, the state and the church providing all three innovations along the way.

In Nepal’s case, ironically, it was the monarchy that felt the need to permit or promote voluntary values brought by Christian missionaries in education, health and Hoftun’s “ethical capitalism” in engineering. With its loss of commanding political position in 1990 and the adoption of Washington Consensus capitalism by mainly democratic socialist and Marxist-Leninist parties, raw profit motive of capitalism was no longer bridled by concerns of social justice. Hoftun just could not muster support for his type of ethics-led development in Nepal or Norway, and had to see his small Nepali corporate successes slowly devoured by larger predators both foreign and Nepali in the development space.

Liechty’s main objective is to document this remarkable history as a tragic lesson of “what might have been” in Nepal’s hydro development through the life and work of this amazingly original Norwegian missionary. His was not to address its larger development history. However, it is worth recalling other efforts at alternative development pathways, some of which succeeded and others which similarly foundered as Hoftun’s did, to not come away with the impression from this book that Hoftun’s was the only such initiative in Nepal. Many of them are awaiting their own Liechty to show up as PhD researchers or even investigative journalists.

The first hydro company in Nepal was Morang Hydro set up during the last decade of Rana rule in the 1940s, which wasted away with the end of that dynasty. A Nepali-owned private Bageshwari Electrics was set up in the late 1960s in the western Nepal town of Nepalganj after King Mahendra initiated land reform measures. Landlords there, deciding then that land was no longer a safe investment, shifted to electricity production but it eventually died following Nepal government’s decision to centralize (nationalize) power production, ironically under international donor pressure (the very donors that some two decades later were pressing for privatization!).

In the 1980s, Nepal’s Agriculture Development Bank, under the charismatic leadership of Srikrishna Upadhaya (who later received what is called the “alternative Nobel Prize” – Right Livelihood Award for his contributions to alternative, people-centric development), helped the widespread dissemination of small-scale, multipurpose power units (MPPUs) manufactured with Swiss help at a workshop in Balaju, Kathmandu. King Mahendra Trust for Nature Conservation propagated this technology in its famous Annapurna Conservation Area Project (ACAP) which innovated people’s participation in nature conservation. The Austrian government helped develop a small hydro near the village of Namche Bazaar that is run very successfully as a semi-cooperative private company, Thame Bijuli Company. Inspired partly by Nepal’s famous community forestry, a group of village enthusiasts began community-managed distribution system that has now ballooned into over 300 groups in more than 50 districts of Nepal. Many of these alternative power development initiatives occurred in parallel with Hoftun’s BPC, sometimes with a degree of interaction but often not, suffering either benign neglect or outright hostility by the government or political parties in power.

Liechty’s book becomes an important template for research into these non-mainstream ventures in Nepal as well as a in other areas of the Global South. This is especially so because energy crisis of a new and more virulent form than that precipitated by OPEC price hike in the 1970s is looming in the aftermath of the Ukraine war. Models of power development championed by international develop agencies have either failed or stopped inspiring faith. As the Age of Aid that began after the Second World War heads to an end, the process of rethinking development is underway. Liechty’s book is a great help towards that rethinking.

Arthur, B.W. (2009). The Nature of Technology: What it is and How it Evolves. London: Allan Lane of Penguin Group.