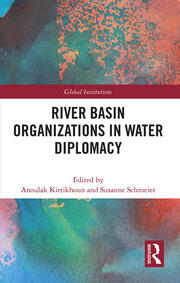 The role of river basin organizations (RBOs) in water diplomacy is the topic of investigation in this well-written and well-conceived collection of essays co-edited by Anoulak Kittikhoun and Susanne Schmeier. The book is comprised of 15 chapters, each of which contains a number of useful maps, tables and figures. In addition to an introduction and conclusion (Ch. 15), the book consists of a chapter on the legal role and context of RBOs (Ch. 1); three chapters on North America -- the Great Lakes (Ch. 2) and Columbia River (Ch.3) basins shared by Canada and the United States; shared surface and groundwater resources along the United States-Mexico border (Ch. 4); a comparative case of the Columbia and Senegal river basins (Ch. 5); three Africa-specific chapters focused on the Niger (Ch. 6), Nile (Ch. 7), and Congo (Ch. 8) river basins; three ‘hard cases’ -- the Jordan (Ch. 9), Helmand (Ch. 10) and Aral Sea (Ch. 11) basins; a relatively positive take on the Mekong River basin (Ch. 12); a reflection on China’s approach to transboundary water governance (Ch. 13); and a European regional overview (Ch. 14).

Contributors to the volume will be well-known to readers of this journal. The chapters are uniformly of high quality and the collection presents a useful set of case studies whose common analytical framework provides important food for thought. The editors define ‘water diplomacy’ as ‘one dimension of the broader and multifaceted framework of interactions between states and other actors over their shared water resources’ (p. 3) which also includes ‘transboundary water management’ and ‘water cooperation’ (Figure 1.1). More specifically, they state ‘water diplomacy aims to prevent, mitigate, or resolve conflicts that emerge due to the transboundary nature of water resources with the objective to maintain or build cooperation, stability, and peace beyond the water sector.’

For the authors, ‘[w]hen considering the role of RBOs in water diplomacy, the context in which they operate matters significantly… Turning to RBOs’ role in water diplomacy themselves, four factors are key: the legal mandate and institutional setup of RBOs, as well as the technical and strategic mechanisms they employ to manage disputes and usher in beneficial changes’ (p. 5). Using these four factors as independent variables, and drawing on evidence from the cases presented in Chapters to 2 to 14, the editors estimate RBO capacity and performance across a two-by-two matrix (e.g. high legal and institutional setup and high technical and strategic influence demonstrating functional capacity and effective outcomes versus low/low leading to limited capacity and outcomes) (p.13). In the conclusion (Ch. 15), David Grey alongside the co-editors acknowledge the dynamic nature of RBO development and the context within which they operate, stating that all RBOs ‘do a bit (or a lot) of … water diplomacy for conflict management and benefit sharing’, noting that ‘joint efforts by riparian states are always better than unilateral actions’ (p. 300).

For those interested in transboundary water issues (governance, management, institution building, conflict, cooperation) this book serves as a handy compendium. It provides a means for usefully comparing RBO construction and performance across diverse socio-ecological and socio-political landscapes.

In Chapter 1, Owen McIntyre sets the stage for the case studies that follow by discussing the legal role and context of river basin organizations. McIntyre (p. 25) points out that while the idea of a ‘community of interest’ in transboundary water management constitutes a shared principal, there is no legal mandate for states to create or participate in a jointly formed institution such as an RBO. Nevertheless, he states, today there are well over one-hundred such organizations. What, therefore, has driven this RBO-building phenomenon?

Most chapters highlight the perceived need to avoid or resolve conflict as a key motivation for RBO development. Chapter 2, focused on the Great Lakes of North America, describes these organizations as ‘collaborative governance regimes’ emerging to deal with specific challenges – ‘severely degraded water quality’ (p. 51); declining fish stocks (p. 60) – revealing both interdependence and conflict potential. While legal and institutional mandates differ among organizations, ‘[these] … undertake activities that reduce uncertainty, prevent and mitigate disagreements, build trust, and promote stability and cooperation with respect to water resources’ (p. 66). In the European Union-focused Chapter 14, the authors show how discrete conflicts over resource use (canals; fisheries) were successfully addressed through RBOs in the Danube and Rhine.

A second motivation for RBO creation relates to benefit sharing with most chapters focusing on multi-purpose dam building (for hydropower, flood control, irrigation, tourism) as the dominant form of collaborative action. The success or failure of these initiatives is generally a consequence of the socio-political context for action, with persistent failure in the Jordan (Ch. 9), Helmand (Ch. 10) and the Aral Sea (Ch. 11) seen to be due to non-water specific problems. At the same time, seemingly ‘successful’ cases such as RBO development in the Columbia and Senegal river basins mask serious local level side effects such as inter-state dam building agreements leading to flooding the traditional lands of Indigenous people (in Canada and the U.S.) or newly available irrigation water leading to land-grabbing by elites (in Senegal and Mauritania) (Ch. 5).

In quite a few of the cases, a discrete or prolonged extreme event acted as an important motivation for cooperation. A series of flood and drought events led the riparian states in the Senegal River basin to undertake joint infrastructure projects and embed these within an RBO (Ch. 5). The extensive decimation of the Aral Sea led to development in the post-Soviet era of The International Fund for Saving the Aral Sea. In addition to the Aral Sea, outside interests were seen to be involved in peacebuilding through institution building in the Mekong, Nile and Niger river basins.

While the ‘why?’ question is readily answered in this collection, it is the ‘how?’ and ‘who?’ questions that are less clear. In the high-modern era, the how and who was obvious: central state authorities legislated big-infrastructure projects in support of ‘nation building’; these projects were financed by states and private banks and implemented by private contractors and/or parastatal enterprises. In the late-modern era, this constellation of social forces is once again ascendant across much of the Global South. Many of the case studies in this collection present interesting examples of more or less successful attempts to radically revise agreements whose conceptual foundation privileged a limited number of stakeholders while negatively affecting many others (Chapters 3 and 5). In Chapter 1, McIntyre states ‘few international water agreements expressly require the involvement of stakeholders or the public’ (p.37). Also, ‘the outcomes envisaged for procedural engagement regarding large-scale water utilization or infrastructure projects emphasize legal stability above all else’ (p.36). Put differently, there is little room in these agreements either for inclusive participation by all affected parties or a flexible and adaptive approach to changes in the environment over time. That the Nile Basin Initiative (NBI), the Columbia River Treaty and the Mekong River Commission continue to evolve in pursuit of more inclusive and holistic approaches in support of more widely realized benefits is testimony to, … to what exactly?

It is not clear how these RBOs evolved beyond their high-modern conceptualisation, or whether many of the RBOs described would survive without external donor support. It is also not clear how robust these organizations are given the persistence of high politics being played by hydro-hegemons in various basins. In a very interesting Chapter 13, Xie and Daojiong clearly articulate how China plays by old fashioned rules; there is no room for multilateralism, or track 1.5 or track 2 diplomacy in China water policy. The initiation of the Lancang-Mekong Cooperation Mechanism was ‘spurred in part by the launching of region-wide cooperation initiatives by such geographically external actors as the United States, Japan, South Korea and India (p.259). This is clearly RBO creation motivated by Chinese self-interest. In Chapter 12, China sits like the proverbial ‘elephant in the room’, mentioned only twice and both times in relation to dam building projects. Perhaps, then, the key questions for the editors to be addressed in Volume 2, should they find the will and way to produce it, is to investigate (i) how ‘successful’ RBOs got that way (not just describe them and map their performance); and (ii) among these successful cases, how have sub-national, basin ‘stakeholders’ fared in the decision making and implementation process? Unless we successfully open up the ‘black boxes’ of basin statecraft, we will be able to understand neither their true genealogy nor their fungibility.