Urban Emergency Management and the Crisis of Neoliberalism (Benz and Cassano, 2021) 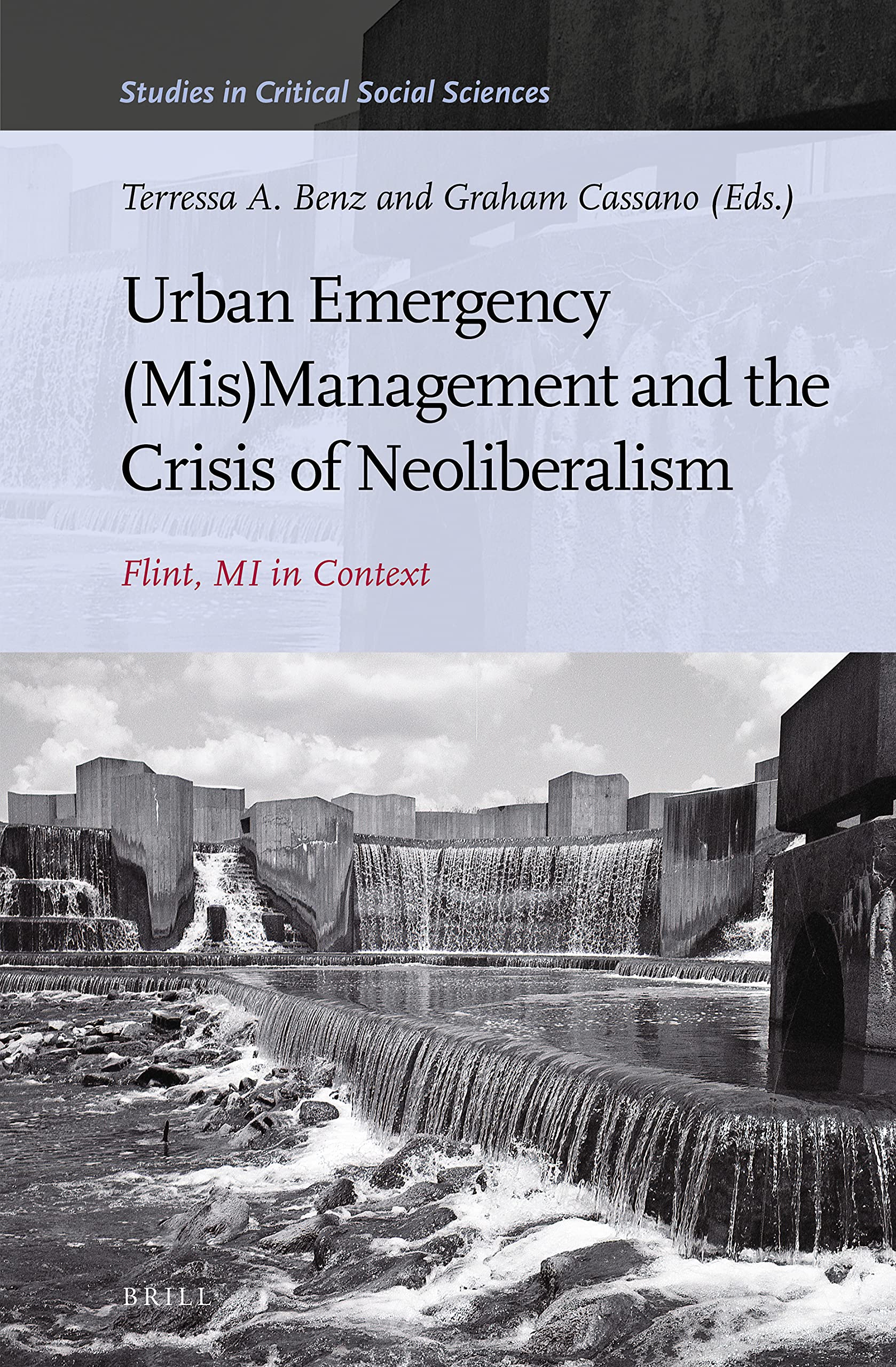 School of Environment and Sustainability, University of Michigan, Ann Arbor MI US; cedrict@umich.edu

To cite this review: Taylor, C. (2022). Review of “Urban Emergency Management and the Crisis of Neoliberalism: Flint, MI in Context”, Brill, 2021, by. T.A Benz and G. Cassano, Water Alternatives, http://www.water-alternatives.org/index.php/boh/item/320-flint3

In 2014, Flint, MI, had its water source switched from the Detroit Water System to the Flint River. What ensued is arguably one of the most tragic human-made public health crises in recent memory. Tens of thousands of residents were exposed to lead-contaminated water while Legionnaires disease killed and hospitalized many people. Scholars across the academic spectrum have contributed many perspectives on why the Flint Water Crisis occurred. Failure of government at the state and federal level and aged and declining infrastructure are among many factors implicated in previous scholarship. The edited volume Urban Emergency Management and the Crisis of Neoliberalism: Flint, MI in Context is a novel approach to understanding the Flint Water Crisis. The editors Terressa A. Benz and Graham Cassano aim to comprehensively describe and understand the Flint Water Crisis from a critical perspective. In compiling contributors' work from an array of academic disciplines, traditions, and methodologies, there is an attempt to impress on the reader that the water crisis is symptomatic of deep, often uncovered truths about the society in which we live.

The editors impress on the reader that deep structural factors that gave rise to the catastrophic health outcomes associated with the water crisis are still with us today and are likely to result in similar outcomes in the future. By paying attention to the economic, political, and social contexts in which the Flint Water Crisis occurred, we can come a step closer to uncovering the root cause of the domination and oppression suffered by society's most vulnerable. Rather than rehashing the usual 'facts' about the water crisis, the edited volume uncompromisingly scrutinizes neoliberalism and racism. Forces so deeply embedded in the society's constitution that they appear normal and thus are rarely implicated. The agenda is clear. The chapters, particularly in the book's first section, clearly describe and explain how neoliberalism demolishes urban communities and thus push the reader to consider whether the neoliberal paradigm is sustainable.

The editors promise a systematic and scientific examination of the driving forces behind and consequences of neoliberal policymaking on human lives. However, Urban Emergency Management and the Crisis of Neoliberalism: Flint, MI in Context, includes chapters that utilize approaches not typically considered empirical. A deep understanding of the context of the Flint Water Crisis is predicated on art, photography and even comics. This is a clear departure from many of the other publications on the crisis.

While the book endeavors to do a deep dive into the context of the Flint Water Crisis, and how capitalism and racism stymie social justice it also sheds light on the reactions of activists and communities to their oppression. These aims are what make this academic publication different from others. There is an assumption that once the deep truths about society are unearthed, they can be changed by the very communities that they impact.

Urban Emergency Management and the Crisis of Neoliberalism: Flint, MI in Context is divided into two sections, with the first entitled Structure in Context. The contributors in this section all successfully frame the Flint Water Crisis and other environmental issues in different places as occurring within a neoliberal and racial context. However, chapters 1 and 2 further warrant comment. The chapter Neoliberalism, Urban Policy and Environmental Degradation by David Fasenfest, gives an overview of the factors and developments that gave rise to Emergency Management in Michigan, where a municipality can have its democracy suspended in the interest of addressing municipal fiscal distress. The policies that undergird emergency management are predicated on the belief that the fiscal difficulties experienced by urban areas are self-inflicted due to problematic management and ignore the structural realities responsible. The reader is made aware that in the long term, such policies only worsen the futures of municipalities that are taken over. African Americans in Michigan who are more likely to be under emergency management suffer greatly. While the law does not have any covert racist language, the imposition of the law on majority-minority cities likely reflects forms of racism and serves to worsen the circumstance of African Americans who are already structurally disadvantaged. Neoliberal policies inform decisions that are primarily made in the interest of capital and not people.

Southwest Detroit by Teressa Benz impresses on the reader that neoliberal policies, which appear to be colorblind, in effect, have differential and significant racial impacts. Neoliberal colorblind policymaking prioritizes corporations' interests while discounting people's interests, particularly the health and well-being of communities of color on the frontlines of environmental hazards. Benz draws on aspects of critical race theorist Alan Freeman's work to demonstrate that the courts have employed a 'perpetrator perspective' in adjudicating claims of environmental injustice that disproportionately affect people of color. In addition, beliefs around individual choice, responsibility, and the free market have ultimately resulted in budget cuts to Michigan institutions like the Department of Environmental Equality (MDEQ) and the Environmental Protection Agency (EPA), which led to them supporting corporate interests over human health.

Overall, according to Benz, an environment is created that latently maintain a race-based system of worthiness in Michigan.

Benz argues that though pursuing accountability of specific individuals implicated in the Flint Water Crisis may be cathartic, such an approach does nothing to change things substantially. Instead, the author suggests fundamental or even revolutionary changes to the very foundations of the legal and regulatory systems. The ideas of a neoliberal doctrine must be challenged, followed by a restructuring of the courts and regulations - doing away with the illusion of legal formalism. Further, Benz advocates for health opportunities and environmental protections being redistributed to ensure that no group bears a disproportionate burden of environmental toxic exposures.

What makes this chapter a particularly notable contribution is the willingness to advocate radical change and not merely comment on environmental harms in Michigan. Recognizing the formidable barriers to changing the legal and regulatory system, Benz refers to Bell's interest convergence as a potential strategy. Gentrification, where whites now occupy urban spaces once held by people of color, is offered up as an opportunity to facilitate a convergence of interest. While Benz suggests research is needed to explore that possibility, the gentrification suggestion is likely to receive some pushback concerning its ability to improve the circumstances of communities of color in areas like Flint or Southwest Detroit.

Chapter 5 entitled Housing Waste The Lakeside Public Housing Complex, Pontiac, Michigan by Graham Cassano, Jon Carroll and Daniel J. Clark, utilizes an interdisciplinary methodological approach to argue how the spatialization of race led to the racialization of space, which in turn deepened structural racism in Pontiac MI. The authors maintain that racial stigma around place and the people that inhabit those spaces pave the way to justifying the implementation of neoliberal policies that further negatively impact communities of color. The stigma around the Lakeside Federal Housing Complex public housing and Pontiac itself resulted in it and its black residents being perceived as partly responsible for the decline of the city. Like Flint, although the fortunes of Pontiac were tethered to factors outside the control of residents (e.g., the decline of the auto industry and federal monetary policy), racialized stigma ultimately paved the way for the city to be taken over by an emergency manager. Chapter 5 is also singled out due to its effective use of photography, maps, and other images, which help the reader understand what is truly at stake when "neoliberal demolition" occurs.

Part two of the edited volume entitled "Reaction and Resistance" focuses on the efforts of community members and activists to challenge or shape neoliberal economic policies. Jacob Lederman's chapter Technocracy and Populism suggests that community participation in

local urban governance, where citizens hope to shape or challenge policies that affect them, is often stymied. A technocratic approach to consensus building between communities and market interests typically results in local voices being corralled with respect to the input

they can make. Chapters 7 and 8, however, speak to ways neoliberal policies and ideas are challenged.

Chapter 7 entitled Waging Love from Detroit to Flint by Michael Doan, Shea Howell, and Ami Harbin gives the reader insight into the various forms of activism around the Detroit Water Crisis and the Flint Water Crisis. Activists from both communities on multiple fronts and with an array of strategies and tactics strive to rectify immediate concerns of water access and quality and achieve some semblance of retributive justice. Activists from both Flint and Detroit point to the policies around emergency management. There is a recognition that the future of their communities must be one in which there is genuine democracy and self-determination with respect to their health and well-being.

A.E. Garrison's chapter – Bottling Public Thirst, sought to problematize the normalization of the privatization of water and the diminishing of concerns of communities like Osceola County and Flint in MI, where there were concerns over water. The chapter uses a comic book format to quickly communicate capitalism's challenges. Garrison challenges the reader not only to understand the disastrous impacts of privatization on communities but also to question whether the state of affairs is indeed unchangeable. The chapter itself can be thought of as a tool with which to understand, challenge, and change fundamental ideas about society. Because of its accessible format, various publics can first see the deep connections between capitalism and racism and then seek to eradicate them.

Based on interviews and ethnographic interactions with water activists and residents, Ben Pauli's contribution, Lead Does (Not) Discriminate, challenges environmental racism as the central organizing principle with which to understand the Flint Water Crisis. Though some residents see race playing out in their lived experiences, "outsiders" and academics have imposed racial interpretations of the crisis in popular discourse. This has implications for the ability of citizens to advocate for the issues that matter to them. He suggests that academics should be aware that their platform could inadvertently drown out the voices of the community.

The afterword, The Flint Water Crisis, KWA And Strategic-Structural Racism provides an interesting contrast to Pauli's contribution. The article is taken directly from Hammer's written testimony to the Michigan Civil Rights Commission Hearings on the Flint Water Crisis. For Hammer, racism is an undeniably contributing factor. There is willful blindness on the part of the powerful to the interests of society's most vulnerable. He goes on to argue that vulnerable populations are typically subject to an exploitation that strategically manipulates the very vulnerability created by various forms of racism, i.e., express racism, structural racism, and unconscious bias (Hammer, 2019)

Urban Emergency Management and the Crisis of Neoliberalism: Flint, MI in Context is a significant publication. The interdisciplinary tone of the publication provides a deeper understanding of the interconnectedness of domination, namely neoliberalism and racism, as it relates to the Flint Water Crisis and other environmental issues elsewhere. The edited book speaks to different publics -academic and otherwise. The book's overall tenor is pessimistic regarding the place neoliberalism has in modern society. However, the hope of changing the very fundamental truths about society and optimism for a future where no group is denied social justice is discernable. The studies in the volume point to the notion that uncovering and challenging ideas is the first step to liberation. Things may be bleak, but they can be changed.